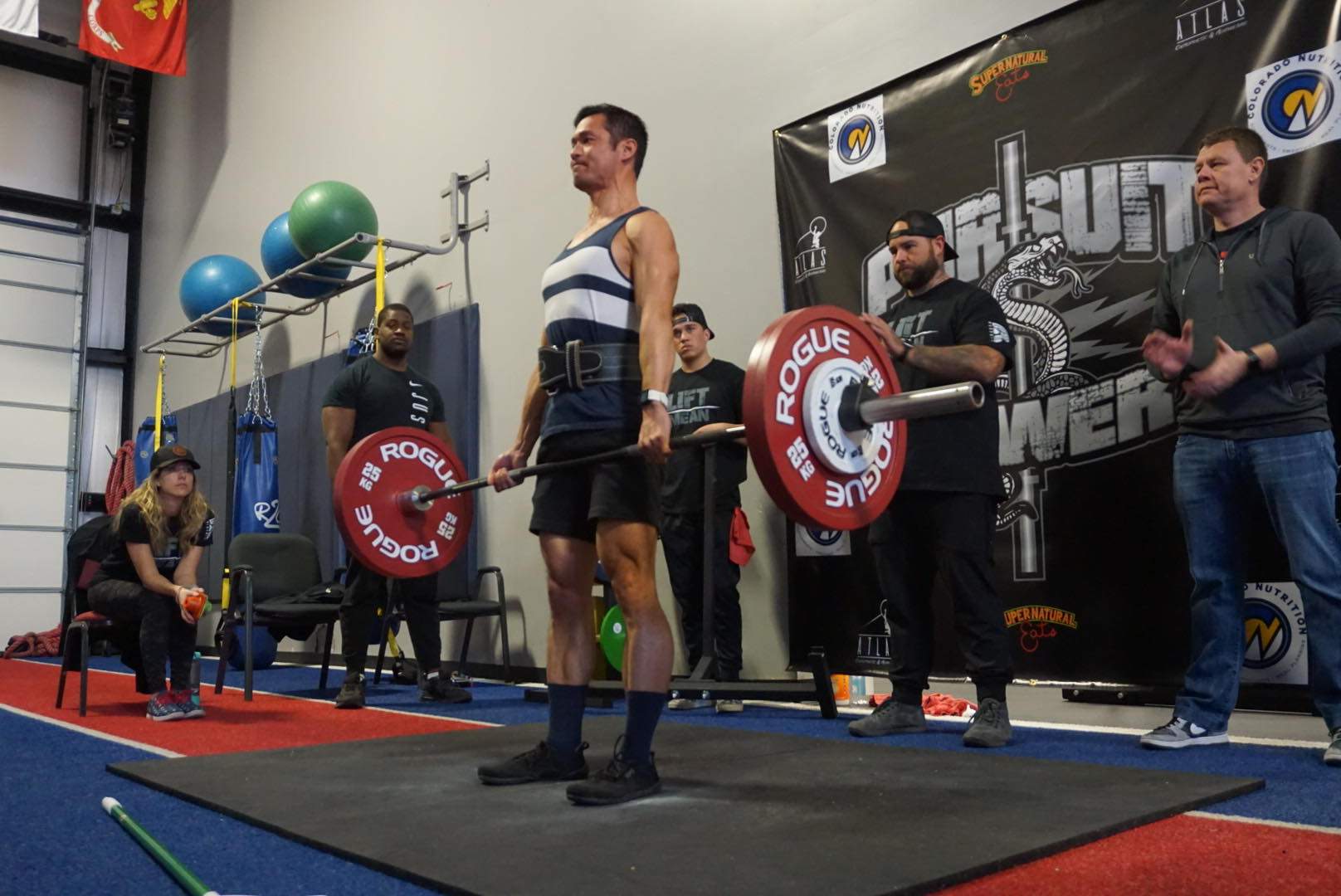 It always has amazed me how strong the players in the NFL are. Now, you probably would not be surprised that someone like DK Metcalf can lift a lot because he is incredibly ripped, but even some quarterbacks have been known to be able to lift the equivalent of, say, a motorcycle. Well, maybe Tom Brady’s dad bod or Eli Manning’s dad bod can’t (although I’d bet they could still lift more than most people, including myself), but take Tim Tebow for example. Supposedly he can squat 550, bench 450, and deadlift 500 pounds. “Pretty impressive for a quarterback/outfielder/choirboy,” read the source article.

If that wasn’t inspiring enough, then take my friend Jennifer. This is the same Jennifer I did the Murph Challenge with last year. She’s a beast. And last January, she did an unsanctioned powerlifting meet called Pursuit Power, held at Pursuit Nutrition and Training Center in Windsor. I went to watch and videoed her best lifts. You can see them here:

After that, I resolved to enter this year’s Pursuit Power. I figured it would be a good way to test out how much I could do in the three classical powerlifting movements, and motivate to lift more. This is how it went.

The morning before the meet, I went into the gym to get weighed and to specify my opening lifts. It turned out that even though participants’ weights would be used to note their weight class, it was primarily important in the calculation of the Wilks Coefficient—used to compare the strength of people of disparate weights.

About thirty people participated. I was placed in the second of three “flights” of powerlifters, which was based not on our weight or weight class, but the amount of kilos we chose for our lifts.

As noted above, the three lifts are the squat, bench, and deadlift. Each competitor would get three attempts, and could go up in weight for each subsequent attempt. They cannot go down in weight. The latter point would be crucial. More on this later.

It was also crucial to listen to the commands. They were as follows:

If one racked the weight before the official “Rack” command, for instance, that lift would be scratched. So it was critical to listen to the judges while performing the lifts. The judges were also there to ensure the lifts were done correctly. In particular, for the squat, one had to squat low enough so that the thighs were at least parallel to the ground. For the deadlift, one had to be standing fully upright with the shoulders not slouching forward.

The squats came first. Since last January I had successfully done a one-rep max of 245 lbs. in training, I specified an opening lift of 110 kilograms, or 243 lbs. (All powerlifting meets use kilos.) That went well and so I specified an additional 5 kg for the second and yet another 5k for the third. Success at 120 kg (265 lbs.)

The bench came next. Last year in training, I did a one-rep max of 215 lbs., so I specified an opening lift of 209 lbs. (95 kg). The problem was my one-rep max last year would have been disqualified for not holding the weight right on my chest and waiting a full second to press. In other words, that 215-lb. bench press was not legitimate.

Unfortunately, that didn’t register in my head all this time. I knew, for instance, that in training I was legitimately doing sets of 3X 185 lbs. without problem. In fact, as a warm-up ten minutes before my opening bench press at Pursuit Power, I pressed 185 lbs. with good form and no problem. What’s another 24 lbs.?

The answer: too much! I failed on my opening lift. And despite advice and encouragement from Zach (friend and owner of Pursuit), David (an organizer of the meet), and Jennifer (who was not competing this year but was helping her 13-year-old son in what was also his first powerlifting meet), I failed the second and third time at the same weight. Face-palm.

The last lift was the deadlift. The most I’ve ever deadlifted was 255 lbs. in practice, but that was in sets of three and without a weight lifting belt. Surely I could lift more. So I specified an opening lift of 120 kg (265 lbs.)

In hindsight, for the squat, I should have been a little more aggressive in specifying the second and third lifts, as I think I could do 15-20 lbs. more. For the deadlift, I was definitely near my limit, but might have been able to lift another 5-15 lbs.

For the bench press, I definitely should have been more conservative. Next time, I probably would start with 185 lbs. just to make sure I get some numbers on the board. At least now I know my true one-rep max is somewhere between 185 and 209 lbs.

that comp was fun ↩ Reply

It was and the first one for both of us! Will you be doing another one soon? ↩ Reply