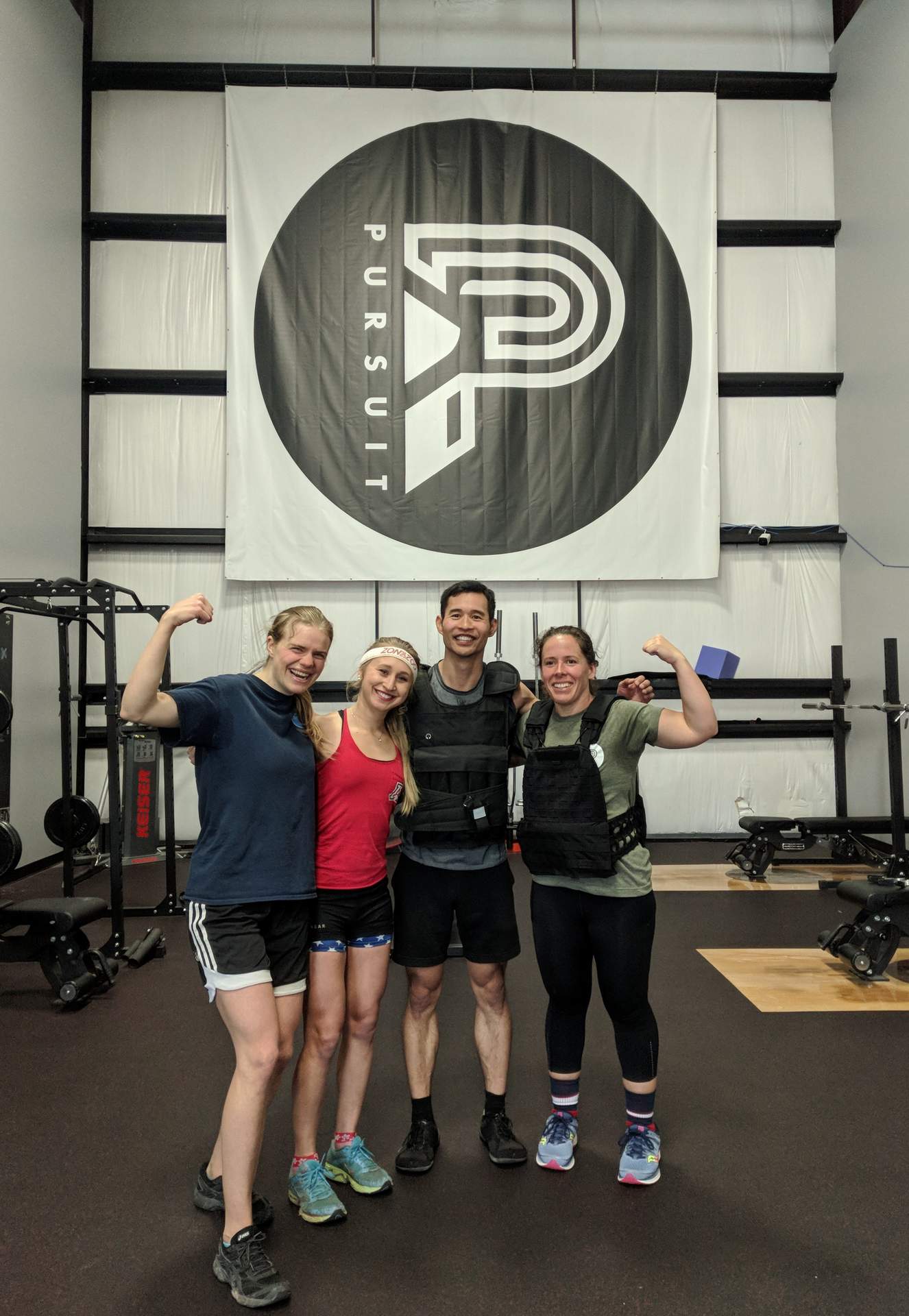 “So pumped about this,” I told my friends Emily and Jennifer in the days leading up to the event. “MURPH!”

Actually, I had been looking forward to this event since hearing about it a year ago, when Amber and Jennifer had done it on Memorial Day 2018. It is held in honor of the late Lieutenant Michael P. “Murph” Murphy, who was awarded the U.S. Military’s highest decoration, the Medal of Honor, for his brave actions in the War in Afghanistan. Appropriately, participating in the so-called Murph Challenge involves doing one of his favorite workouts that includes the following:

Over the last year, I wondered if I could do it. The pull-ups, 20 pounds, and time limit were surely the challenging factors. In fact, many (most?) people who do the Murph Challenge do it without a vest and use a resistance band for assistance on the pull-ups.

Zach, the owner of Pursuit, would have none of that: an hour, just as Murphy had done, was the amount of time we’d have. He did recommend breaking up the exercises into the following, however:

“The original way it was done,” he explained, “was doing the pull-ups, push-ups, and squats in consecutive order. But then people were getting rhabdo, which is why I recommend doing sets.”

Sounded like a good plan to me. A side benefit is that it is a lot easier to keep track of how many repetitions this way. I brought a laptop to keep track in Excel, but this turned out to be like bringing along an Ivy League math professor to help with a first grade arithmetic quiz. A simple notepad would have sufficed just to keep track of sets.

After Zach went over strategy and modified Murph options (e.g., push-ups on knees, using resistance bands that you step into for assistance for the pull-ups)… we were off and running! There were about 10 of us.

As expected, the first mile run—even with the vest—was pretty easy. I knew it would be easy for Emily too, having turned in a good time at the Horsetooth Half Marathon last month.

Then it was time for the main event. I did my sets next to Jennifer, while Emily and Evelyn set up in another room. Both Jennifer and I were wearing weighted vests. Jennifer was doing a “Half Murph” this year—doing half the number of each exercise—but nevertheless it was still impressive how she was able to do the pull-ups with weight as you can see in the video below!

By the midway point, the Garmin indicated that only 26 minutes had elapsed. This was when I started to fully believe that I could finish the whole Murph Challenge within an hour.

Nevertheless, by the ninth set, the pull-ups were getting very tough. I ended up breaking that one up into 3 + 3 + 2 + 2 reps. The tenth set was even harder, and I broke that up into 4 + 3 + 2 + 1 reps. Admittedly, I was starting to rush by that point to give sufficient time for running the final mile, and my form was breaking down. (If there were referees judging each pull-up, they might have disqualified 10-15 of my pull-ups for not completely clearing the bar with the chin.) I was barely able to crank out the 100th.

By that time, Emily and Evelyn had already finished doing their modified Murph (sans vest and using resistance bands for the pull-ups), and Jennifer was done with her Half Murph. In fact, while waiting for me, she did an additional 150 squats making her total for the day 300 squats, so she did a “Full Murph” for that exercise.

When I completed the 100th pull-up and there were still 12 or 13 minutes left to run a mile, I knew I was going to finish within an hour. Still, with my heart rate high and breathing pretty hard, that final jog was no cakewalk. It took over nine minutes. Final time was 57:13.

When I came in, we gave high-fives all around. We did it!

Emily wasn’t even sore afterwards. Jennifer and I both felt pretty good that first day, but were very sore in the ensuing days—especially two days afterwards.

For me, those muscles had low-level pain for even five days afterward. It was a good feeling, though.

Next year Jennifer is going to do a complete Murph and I will try to better my time. It sure is an interesting, and dare I say fun way to celebrate Memorial Day and commemorate the sacrifices warriors had made for their country. RIP Lt. Michael Murphy.