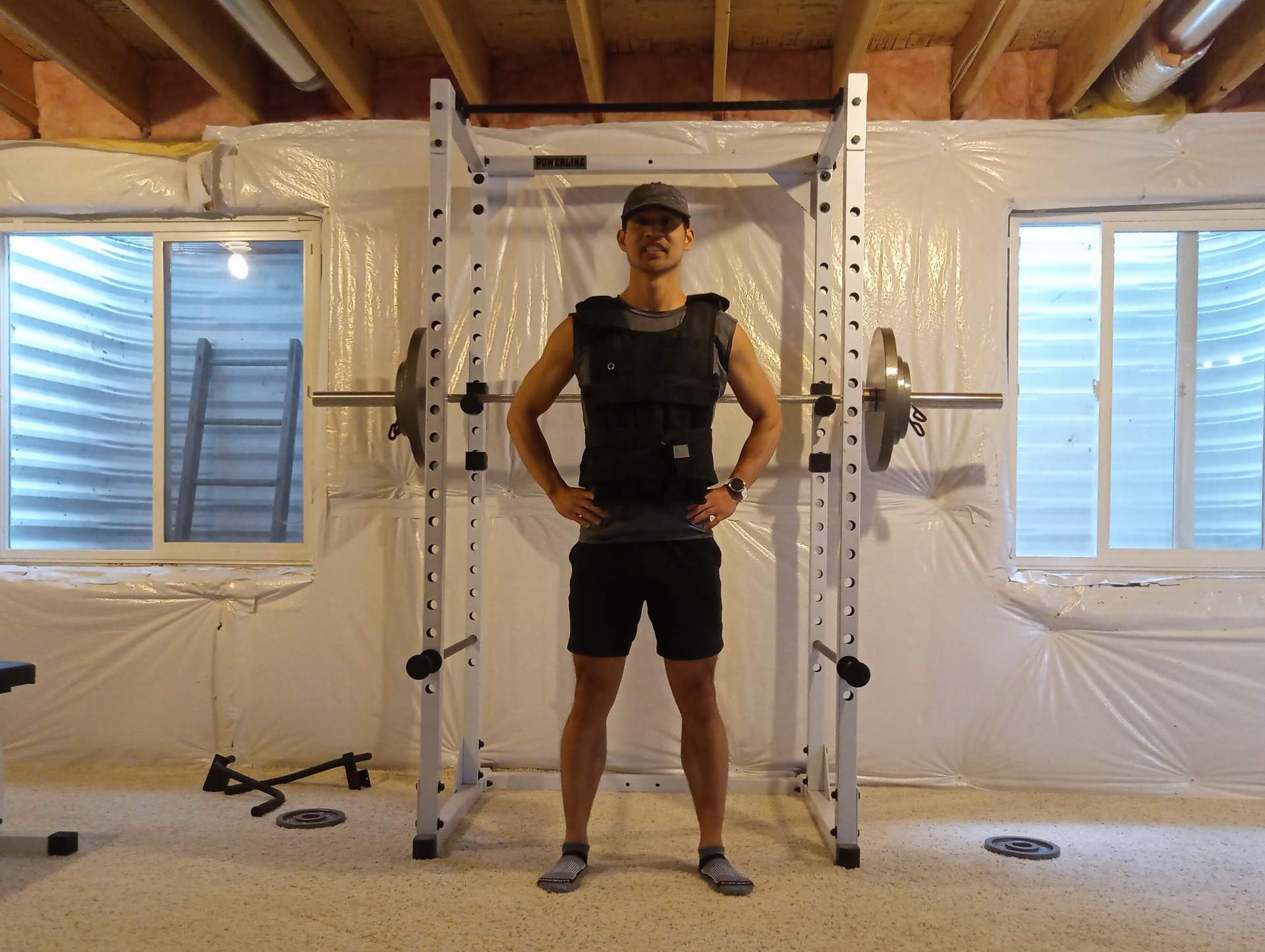 Shortly after the Thanksgiving Murph, I was talking with my friend Matt in one of our language conversation meetups—español, francais, or Pǔtōnghuà, I don’t remember which. It was then he proclaimed that he wanted to do it as it indeed sounded like a good challenge. He asked me when would be the next one.

“Memorial Day,” I replied. “That’s when it is traditionally held.”

As a review, the Murph Challenge is named after the late war hero, Lieutenant Michael P. Murphy, and involves doing the following:

“I’m not sure I can do a single pull-up right now,” Matt remarked.

“You have six months to train,” I pointed out. And train he did.

Now, if it sounds kind of ludicrous for a sixty-something-year-old-man to go from not being able to do a pull-up to trying to do 100 in less than six months—on top of running and doing squats and push-ups in under an hour—let me tell you about Matt. In a former life, he studied laser optics, flew hot air balloons in the Macy’s Thanksgiving Parade, and had a world ranking in boomerang throwing. He even fabricated his own boomerangs, which he sometimes used as a prop while living abroad to get people to talk to him and teach him vocabulary, which in turn helped him become of polyglot of 11 languages.

He also is one of the most gregarious people I have ever met, and was a real asset on Team Sea to See’s Race Across America Team, which successfully fielded four tandem bicycles with blind stokers in the famous 3,000+ mile cross-USA bicycle race. Speaking of boomerangs and visually impaired people, he also has a patent for a boomerang for the blind.

Anyhow, the point of that introduction is that my friend Matt is not a typical everyday guy. And in the time we have known each other, he has successfully taken on other athletic challenges, despite not being an athlete since he was a swimmer in high school and by his own admission, not exercising all that much in the four decades since then. For example, he ran his first half-marathon in 2018, and last year, his first full marathon—all within the time limits and by diligently following various “couch to [enter the distance]” plans.

Our friend E joked that eventually I will inspire him to do 200-mile bike rides and triathlons, but first, there was the matter of Murph. Could someone who could not do a single pull-up in December be able to do 100 in May?

I have to admit, I had my doubts, and thus told Matt that he could do “modified” pull-ups using, for example, a resistance band that he could hang off a bar, step into, and use to help propel him upward on the day of the challenge.

He would have none of that and started practicing pull-ups daily. While he did start off in December using the pull-up machines in a local rec center to give him assistance, by January, he was able to do an unaided pull-up with good form. In February, when I was giving him a rock climbing belay lesson in my basement, he demonstrated being able to do three pull-ups consecutively.

Fast forward to the days before Murph while we were talking in Mandarin Conversation, and Matt said he was now able to do 17 in a row. Whoa! I’ve never heard of such improvement before, and that has got to put him in the 99th percentile of 60+ year-olds!

Nevertheless, he said “I may need two hours to do the Murph Challenge.”

Meanwhile, the son of our friend Ping who was also on the Mandarin conversation call, asked if he could join in on the challenge. Collins was home from college and, as far as I could tell, was in pretty good shape. Naturally, not having heard of the challenge until three days before, he hadn’t done any special training for it per sé, but during work hours, he said, he and a coworker would take push-up breaks to “help stay awake.”

Of course, Matt and I were happy to have another willing participant. So come Sunday at 10:00 a.m. on Memorial Day weekend, there were the three of us. Due to the COVID-19 social-distancing recommendations, we met on Zoom, with Matt in his garage, Collins inside his mom’s living room, and me in the basement.

Before starting, we talked a little bit about strategy, with me recommending that they break up the squats, push-ups, and pull-ups into sets of 10. I then read the following excerpt about Michael P. Murphy on Wikipedia, not only to inspire my friends but also because I found it somewhat amusing, given the circumstances:

Murphy was killed on 28 June 2005 after he left his cover position and went to a clearing away from the mountains, exposing himself to a hail of gunfire in order to get a clear signal to contact headquarters for relaying the dire situation and requesting immediate support for his team.

He dropped the satellite phone after being shot multiple times but picked the phone back up and finished the call. While being shot, he signed off saying “Thank you,” then continued fighting from his exposed position until he died from his wounds.

As you can see, Lieutenant Murphy—a Navy SEAL—was definitely a badass. And what is known today as the Murph Challenge was actually of his regular, favorite workouts.

At 10:19:00, Matt, Collins, and I got started. As in last year, I wore my weighted vest with 20-lbs. of sandbags, although since the vest itself weighs 2 lbs., I was wearing 22 lbs. total. Considering the last couple weeks I ran a few times with 40 lbs. in there, 22 lbs. actually felt pretty light.

The morning was overcast and cool, and I did an out-and-back run in 8m30s. Not bad with the vest.

However, it might have been slightly too fast, as by the fourth set of squats, pull-ups, and push-ups, I was pretty badly out of breath and actually had to stop several times to take a 10- or 20- second breather. Matt would later suggest that maybe if I sacrificed another 30 seconds on the run, maybe I could have more than made up for it by needing to rest less during the squats, pull-ups, and push-ups.

I also had to start breaking up the sets of 20 push-ups into two subsets of 10, all while interspersing a few pull-ups between them to make use of “recovery” time.

I ended up completing the sets as follows:

The above took roughly 32 minutes. So I had plenty of time for the final mile run. But due to being so tired, it took me just under 10 minutes to run it.

When I got back to the basement, Collins was also on his final mile, which he was walking part of. He’d wrap it up shortly, so he finished in 53 or 54 minutes. Matt came in soon after, at 55m30s. All three of us, then, finished under the official 1-hour time limit.

When Matt came in, Collins and I joked about how our form for the pull-ups had definitely deteriorated by the end.

“If there was a referee, maybe a fifth of my pull-ups would have been disqualified,” I said, for not quite clearing the bar with my chin or for not going 100% of the way down to a dead-hang.

“Some of my push-ups at the end,” Matt added while laughing, “were quite poor.” We all agreed that the push-ups were surprisingly nearly as hard as the pull-ups.

Nevertheless, we deemed the challenge a success. Never mind that all of us would experience significant bouts of delayed muscle soreness the next day.

Matt was non-committal about doing Murph again later in the year, but I think part of that was due to having successfully completed the challenge. Maybe a triathlon of the do-it-yourself variety could be next…

It turns out that the day after, on Memorial Day, my friend Jennifer—who had told me about the Murph Challenge in the first place a couple years ago—did her own half-Murph. That was particularly impressive considering she ran a virtual half-marathon on Saturday. Congrats to all!