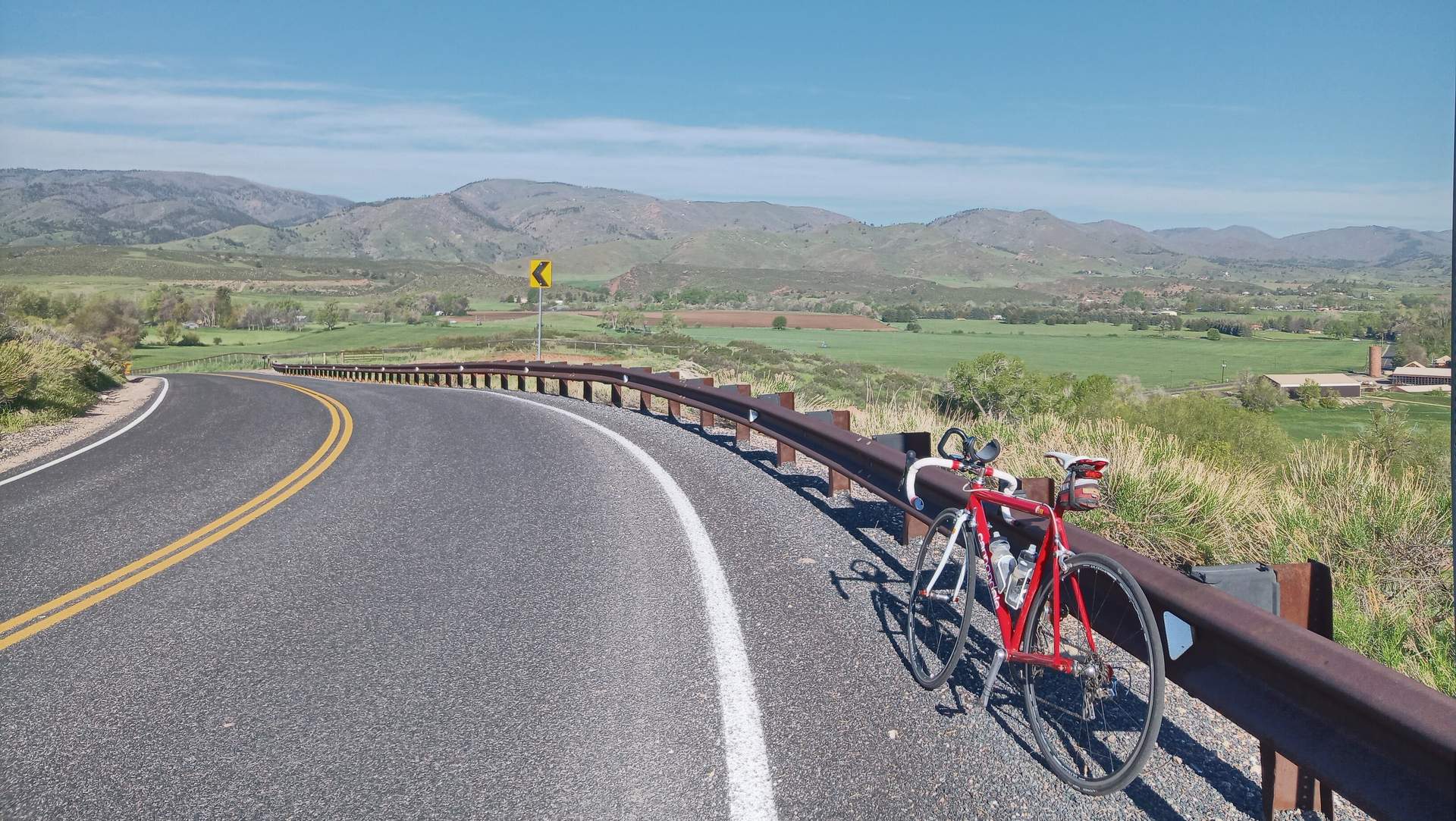 The coronavirus had already caused the cancellation of what was going to be my biggest cycling event of this summer—the Triple Bypass, which is basically Colorado’s version of California’s famous Death Ride. So now my foremost ride of 2020 is going to be a self-supported double century, tentatively planned for late June while the days are longest. Considering that the summer solstice is only a month away, I figured I better start doing triple-digit rides soon. Like right now.

That was the reason for this “Loveland-Wellington 100 Figure 8” self-supported century, which I mapped out only the night before setting out from the driveway at roughly 7:30 a.m.

I front-loaded the steep climbing early all while taking it easy, so when I was done with all the major ascents by the Horsetooth Reservoir, my legs and rest of the body were still feeling very fresh. Besides Horsetooth, some of the best riding was around Masonville en route to Loveland, all of which was made wonderfully verdant by April showers and May rainstorms. Some of the scenery brought to mind this advertisement I had clipped out from Bicycling magazine in 1991, which featured a green oversized-steel-frame Diamond Back road bike in front of what I had presumed was a Colorado mountain road. That was 29 years ago that I had clipped the ad, and here I was, not only now living in Colorado, but still road biking.

As I approached Loveland, I realized that I probably was not far from the home of my friend Lina, who before the coronavirus kept asking me to come visit, if only she hadn’t lived so far away. So I busted out the phone and asked her if she’d like me to come by her house and wave to her from the street in, oh, 25 minutes.

I still had plenty of H20, but it was good to visit my friend and her cat Mulan, if only for 15 minutes. We chatted a good socially distanced 15 feet apart while Mulan stayed even safer behind a glass screen door while watching the two humans converse. Lina was now the first person I had visited since March 12, more than two months ago.

“It was really windy yesterday,” she said.

“Yes, I was so glad it hasn’t been windy this morning,” I replied. “Well, we’ll see about this afternoon.”

I had forgotten about that comment until a couple hours later, when I returned home after riding past Boyd Lake and cruising down Timberline Ave. on its super-wide bike lane. I stopped only long enough to refill my water bottles and down a banana and protein shake when I observed just how much tree leaves were fluttering in the air.

The wind was blowing towards the northwest, meaning that I’d be riding with a tailwind for most of the first half of the remaining 35 miles, and into a headwind for most of the second. I mused that if I had to choose which way the wind was going, it would be in that direction, as that would provide a push on the slightly ascending outbound section, and resistance on the descending inbound segment.

The jaunt out west and then north was unremarkable as there was little to look at. in contrast to the first 65 miles of the ride. But at least I wasn’t very tired; in fact, by Mile 82 I was ready to congratulate myself. Sure, I was not riding fast, but the legs still felt relatively fresh and it looked like I was easily going to make it home in a ride time of well under seven hours.

But then came time to ride into the wind. And I was going through the water bottles at a rate far quicker than during the entire morning. Dehydration was setting in.

As I headed south along the frontage road of I-25, my speed dropped to only 9 mph due to a 25-mph wind, as confirmed by a weather app. What a contrast from a couple months ago, when with a tailwind and fresher legs, my cruising speed was around 27 mph! I tried to stay down in the aerobars, but my back started to give out. And then my quads were getting full-blown cramps.

In the last 10 miles, I stopped three times, partly to stretch out, but mostly to take a break. The legs just were not recovering. They were done.

Finally, with four miles to go, the wind was aiding forward progress instead of hindering it, and I was finally able to coast. When I got home, like a pregnant person, I immediately had some pickle juice and ice cream. A beer would come later.

After the renourishment and a shower, I took a laydown on the floor, thinking there was no way I’d be able to ride another 100 miles if I had to. Clearly, there’s more training to be done before next month’s double century.