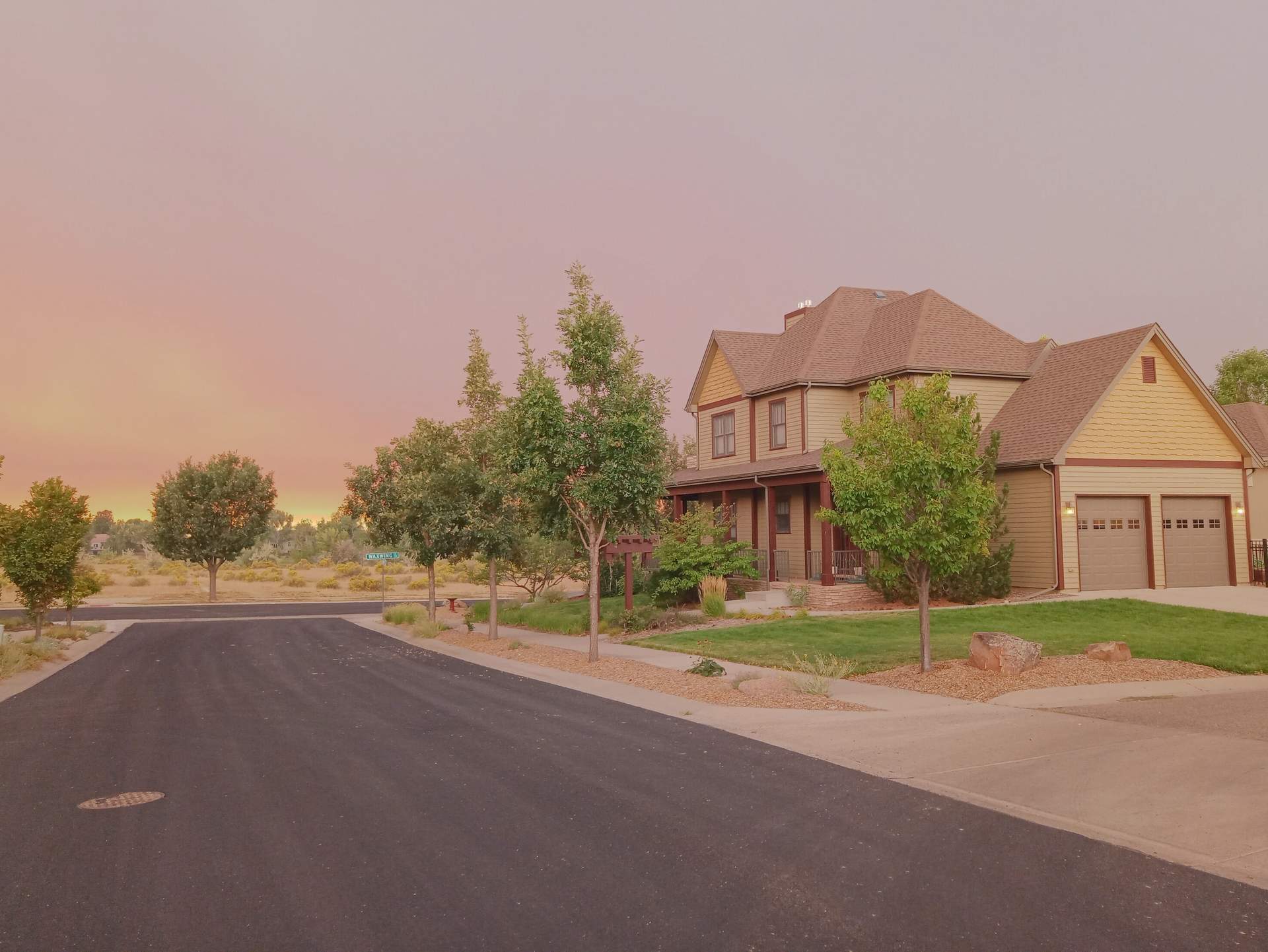 As if 2020 wasn’t already challenging enough, seemingly the entire western United States has been in flames. This includes four large wildfires in Colorado that have been almost 100% uncontained for the last several weeks, with one at Cameron Peak/Chambers Lake being the closest to Fort Collins at 70 miles west.

There actually were two other ones within 12 miles of Fort Collins, but those were put out relatively quickly—a few days, not weeks. So I thought the worst was over, air-quality-wise. But then I woke up this morning. It was remarkably still dark despite being a couple hours after sunrise and the weather forecast calling for sunny skies and 90-degree temperatures today. Ugh, smoke.

In fact, it got so dark that my neighbors’ outdoor lights turned on:

All I could do was shake my head and laugh. With this year’s pandemic, moth invasion of our homes, toxic blue-green algae in Fort Collins’ lakes, grasshoppers eating my neighbors’ gardens, an unusually warm summer with this year tying the record for number of days of at least 90 degrees fahrenheit, sightings of three bears in my neighborhood, and now the thick clouds of wildfire smoke, it really felt like we were doomed.

I had a friend who, every time after just one event (say, rabid skunks) similar to the above happened, would joke that the zombie apocalypse was coming. He passed away a few years ago—rest his soul—but I can’t help but wonder what he would be thinking right now were he still alive.

One thing I have repeatedly learned in the past—be it from marathons or super tough ultra-endurance events, for example—is that when everything becomes all gloom and doom, there’s a good chance that the darkest day has indeed arrived, and things get better. Even if just incrementally.

And so I hope—hope!—today has been indeed the darkest day of the year. Or at least the summer.

As it turned out, Fort Collins experienced one of its largest temperature drops in the last 150 years, going from 96F on Sunday afternoon to 29F on Tuesday morning. With SNOW!

I’m not sure if the snow snuffed out any of the wildfires yet, but at the very least, it cleared out the air. Instead of the Air Quality Index being around 125 like the last few days, it is now… 0. As in the air will never be cleaner.

What a drastic change. We’re saved!

It turned out we were not saved. As of October 22nd, the Cameron Peak Fire is still raging—in fact it’s become the largest wildfire in Colorado history-–and last week several friends living west of the Horsetooth Reservoir had to be evacuated due to the fire approaching their neighborhoods.

It’s amazing how the fire has spread and for how long. Cameron Peak is about 60 miles west of Fort Collins and the fire started on August 16th, more than two months ago.

Then, yesterday on October 14th, the so-called East Troublesome Fire near Rocky Mountain National Park ignited 60 miles southwest of Fort Collins. The smoke from the Cameron Peak and East Troublesome infernos made the skies just as dark, if not darker, than when I first wrote this post. Crazy.

Fortunately, the weather forecasters are saying we should be receiving several inches of snow this weekend. We’ll see if they’re right. If so, hopefully that would be enough to put out the majority of the fires at last.

On October 25th, we received about 10-12 inches of snow overnight. That was for once and for all enough to put out—or at least dramatically contain—the fires. Since then, the air quality has not been a problem—at least until the next fire season.