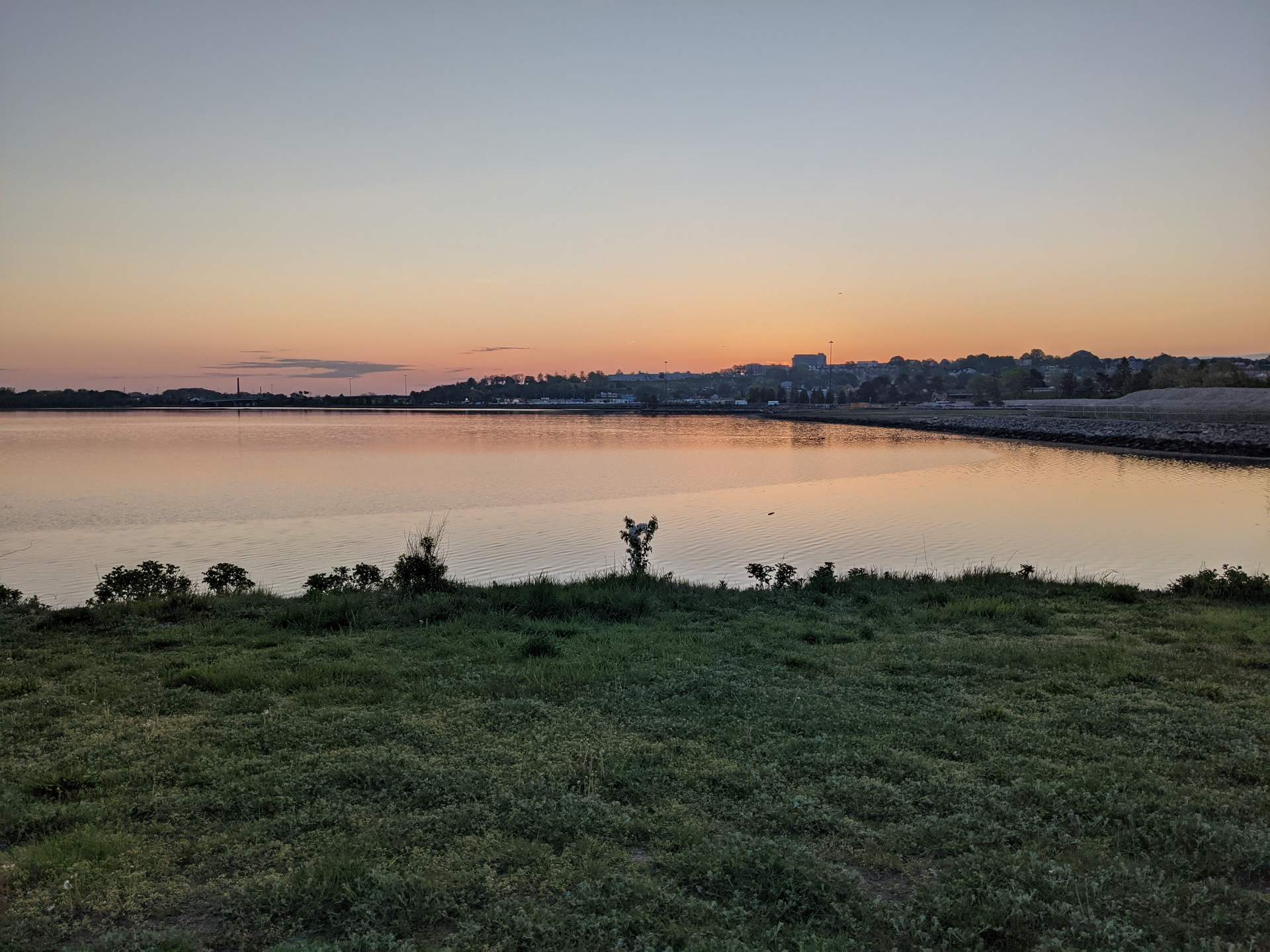 Since this was Marathon #1 of 4 this week, I thought it would be a good idea to conserve a bit of energy for the next three races. Accordingly, I set the Garmin 645’s Target: Pace function for 26.2 miles at 8:35/mile (for a 3h44m finish) so I could track how much ahead or behind that goal I was during the race.

It took only a few miles to realize things were not going according to plan.

“Too fast,” I kept telling myself after realizing I had banked nearly a minute after Mile 1 and about about 45 seconds/mile after that. Yet, I was hardly breathing and the running felt pretty effortless. So I didn’t slow down at all.

Each lap was 3.62 miles meaning that the marathon runners had to run seven total, in addition to a 0.86-mile out-and-back segment at the very beginning to make the race 26.2 miles long. I was running pretty much alone for the first two laps, or eight miles. Then, on the third lap, I realized I had company: a 20-year-old brunette wearing a Camelback with beautifully sculped leg muscles. I wondered if she was an ultra-runner or a powerlifter.

In any case, we pretty much ran together from Mile 8 onward, usually with me a little bit ahead except she consistently slipped by me near the top of the only uphill section of the course: a short, mild gradient that briefly put runners on a path separated from a busy road by a concrete barrier. Then, on the downhill, I’d pass her again. Rinse, lather, repeat.

When 13.1 miles passed in 1h43m I knew that I was going to fairly easily beat my original 3h44m goal. But by Mile 18 and still feeling strong, I started to think sub-3h30m was possible. Considering all the near one-minute misses (four of them) in the last few years, at some point after that I decided I was all in. After all, I wanted to do at least one race in sub-3h30m this year, and wouldn’t it be fantastic if it was the very first one?

During Lap 6 I was still with Emma–in fact I even managed to stay a few steps ahead on the uphill and the downhill. Then came the aid station at the beginning of the final lap, which turned out to be critical.

I could tell my legs were starting to stiffen up so instead of grabbing only a bottle of Gatorade, I grabbed a bottle of water as well to douse and cool myself.

Meanwhile, she grabbed a water bottle and took a quick chug from it (a few laps before, she had shed the Camelback). By the time I had deposited the two empty bottles into a recycle bin, she had gotten a good 50-foot jump on me.

We only had to round the cove one more time so I tried my best to keep her in sight. A couple miles later my legs were on the verge of cramping, so that wasn’t easy!

Of bigger concern was my 3h30m goal. Remembering how I missed it by six seconds years ago because I didn’t look at my watch in the final half-mile in the New York City Marathon, I didn’t make that mistake this time. Also, knowing the course well by this point, I was able to make out landmarks that meant there were only 800m and 400m to go, so I was confident I was going to make it.

My final time was 3h27m48s by my watch or 3h28m06s official; I’m not sure why there was a discrepancy. Emma was sitting down on the ground when I crossed the timing mat; she had finished a full minute ahead of me.

“It was great running with you,” she replied. “I thought, ‘this guy clearly knows what he is doing.'”

We talked for a bit. Apparently she used to live in Toronto, then came to live in Portland, Maine, and hasn’t been able to return to Toronto due to the closed border because of COVID.

This was her second marathon—a big time improvement over her first in Providence, Rhode Island, in which she ran 3h48m—and had been running 70 miles per week in preparation. She asked where I was from, and after I told her Colorado and California, she noted that her brother was going to grad school at Stanford in the fall. “That’s where I graduated from back in 1997,” I replied.

Later I’d learn that she lived less than a mile from this marathon course and ran it all the time. She mentioned we were lucky on race day because there was usually a stronger wind than the gentle, refreshing breeze we got.

Unfortunately I forgot to ask her if she did powerlifting, so I never did find out the story behind her amazingly defined leg muscles.

For me, I was super happy with how the race went and it set a nice tone for the rest of the marathons that week.