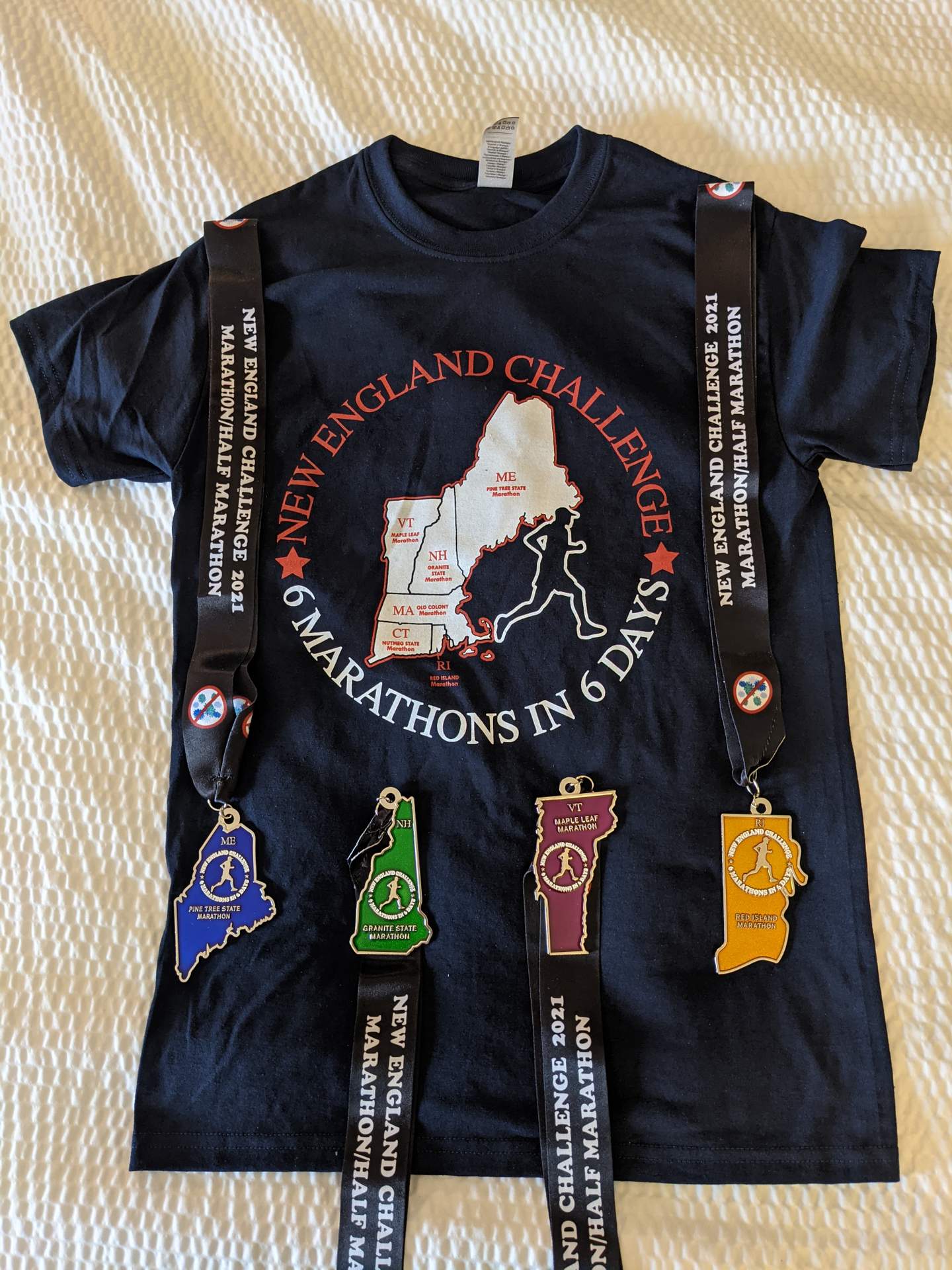 One of the first things I would do after getting vaccinated was to resume traveling and running marathons again. When the lockdowns in the US began, I had run 26.2 miles in 39 American states, but since then had not run an in-person race for over a year.

When the year started, I optimistically thought I might be able to get vaccinated by early summer or late May at the earliest. It turned out I was able to get three injections of the Moderna shot by late April. That would make me fully COVID-proof by mid-May’s New England Challenge, where I could run four states I had not done within six days.

That was an unexpected surprise but fortunately I had been doing long runs since January, starting with 6 miles and adding a mile that every week until I got to 21 miles. I also ran five days a week, including a weekly Sprint 8 session. I felt ready.

The Races in the New England Challenge

Initially, these were going to be the COVID restrictions for all of the races:

While many of these rules seemed like overkill to me considering the low risk of contracting COVID outdoors, I understood that in order to satisfy insurance requirements, the race organizers had to err on the side of caution.

Happily, on the Thursday before the races, the Center of Disease Control (CDC) released new guidelines saying that vaccinated people could safely go about their lives without masks in almost every indoor and outdoor circumstance. Accordingly, the runners who provided proof of vaccination did not have to wear masks.

I was grateful for that because running with a mask would have been uncomfortable and resulted in slower times.

I was very impressed with the organization of this series. Every marathon was run at a very scenic location, usually by water and on non-technical trails. The one marathon I did that was on a road (the Maple Leaf Marathon) also had very few cars, making for a very pleasant experience.

The races involved running multiple laps, but the laps were three to five miles long—long enough to not feel overly repetitive. After running the first couple laps, you also knew what to expect and how to pace each lap accordingly. I actually thought it was mentally easier to count down laps instead of miles.

Logistically, the lap system meant you could pick up water and/or Gatorade at regular intervals. I grabbed a Gatorade on every lap except for the first and also knew where to dispose of it without littering after a minute of sipping.

Another thing I really appreciated about the New England Challenge was that the organizer had struck a deal with a nearby hotel for each race. These host hotels were nice (typically Holiday Inns Best Westerns) and in good locations, and the discounts were substantial. To get the discount, race participants had to book by phone and mention the marathon.

How My Body Held Up

This was the first time I tried running three marathons back-to-back and four marathons in six days. So I really didn’t know how well my body would hold up, particularly for Marathons #3 and #4.

It turned out it held up much better than I thought it would. The first marathon was a shocker because I expected to finish in around 3h45m, but ended up turning out my fastest marathon performance in four years. I also achieved my goal of running a marathon in 3h30m or less at least once this year and unexpectedly did so on my first try.

The second marathon my legs felt pretty good. I ran with my friend Bob Kennedy, who succeeded in his goal of running a New Hampshire state marathon record for 73-year-olds. If I was running on my own and trying to do the best I could, I might have been able to finish a little sooner. But I much preferred to try to help my friend achieve the record.

Marathon #3 was the most difficult. My legs were sore enough that before the race, I had to resort to walking down stairs sideways. The course was also very rolling. However, somehow my legs had actually recovered a lot by the final lap, which was my fastest of the day. The next day my legs were actually less sore than they were that morning.

Marathon #4 was also on a rolling course, but the two full days of rest did wonders and my legs felt much fresher than I had expected. My time was 14 minutes slower than Marathon #1, but that was mostly because the course was slower with lots of turns and undulating terrain. The day after the last marathon I was walking through the airport without much dificulty.

I probably will never run four marathons in six days again mainly because of the lack of a compelling reason (like completing marathon states) to do so. Hence, I am extremely pleased with how well it went.