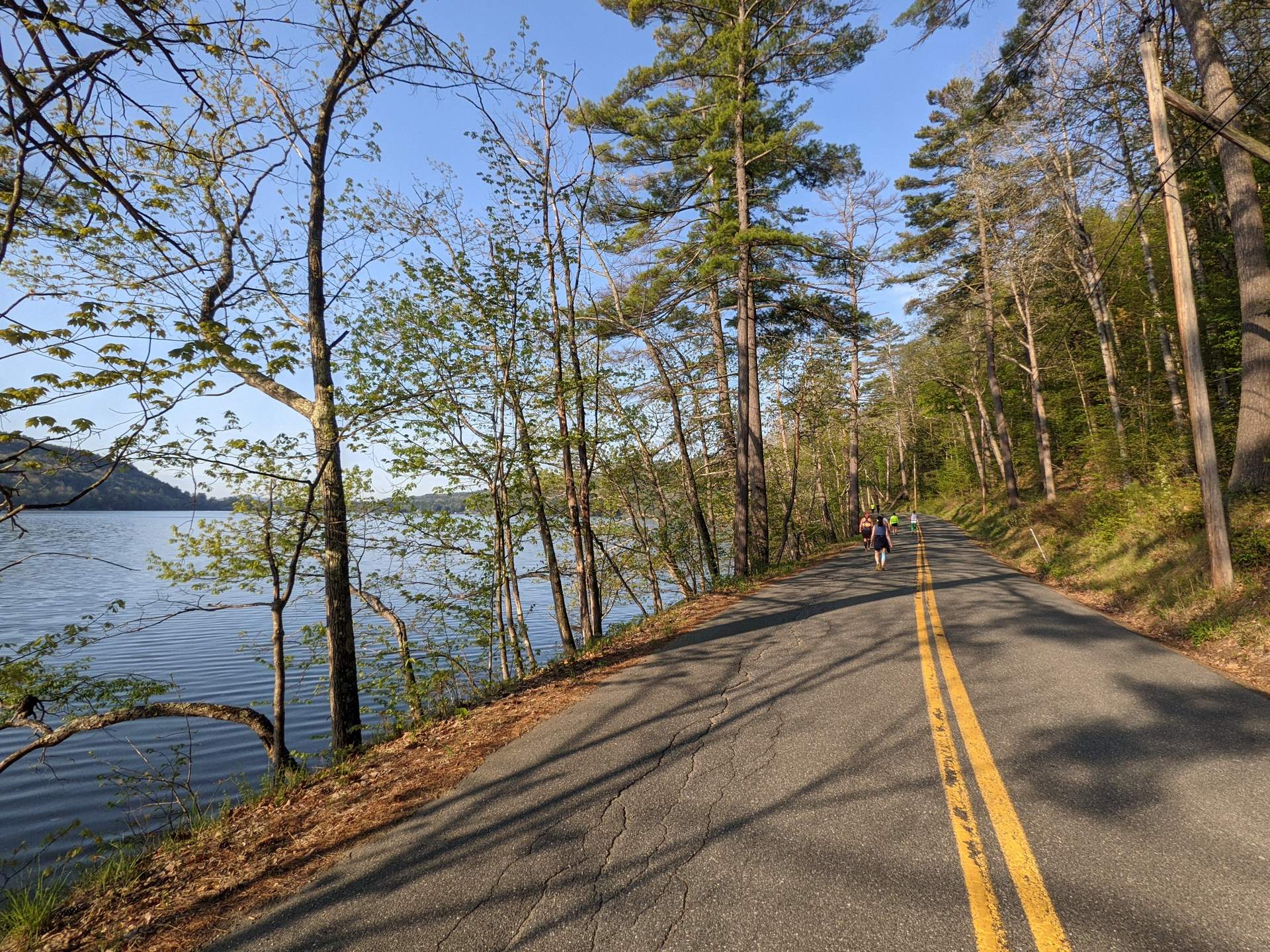 As I looked out of the Lake Morey Resort bedroom window in Vermont at the start line of the Maple Leaf Marathon, I thought, “This has got to be the closest, most convenient starting area of a marathon ever.”

This was a good thing because my legs were notably stiffer this morning than before Marathon #2 of the New England Challenge the day before. Even going from the said sleeping quarters to the start line was difficult, mainly because it involved going from the second floor to the first floor down a set of stairs. Ultimately I accomplished that minor feat walking sideways.

Unfortunately for me, the rolling course had plenty of short ups and downs. It was five laps around Lake Morey counter-clockwise, plus another mile of out-and-back at the beginning to make the race certifiably 26.2 miles.

At least it was all pavement, which is my favorite type of terrain to run marathons on. Also, there were great views of the lake and few cars on this non-closed course.

Because of the soreness of my legs and this was Marathon #3 in three days, my plan was the same as the day before’s: run 0.92 miles and walk 0.08 miles for every mile. This time, however, I was a little more strategic: instead of running/walking based on what the Garmin watch said was the elapsed distance, I did all the walking on the upslopes even if that meant starting to walk sooner or later than I otherwise would have.

The first couple laps I was jogging either a little bit ahead of or behind two unrelated runners—a man and a woman in their forties or fifties—who were very chatty. They talked about race times, other marathons, injuries, and people they dated until long after I had already decided that I’d much rather run in peace and quiet than have to listen to their conversations the whole race.

I finally got ahead of them on a long downhill. But for some reason, the man decided to chase me on the long downhill—from the sound of his loud footsteps, almost an all-out sprint!—before abruptly starting to walk. Did he hurt himself? That was the last time I’d see (or listen to) them.

The third lap I was running entirely alone. During the fourth lap, which I was really feeling slow and sore, I hardly saw anyone either until a tall woman wearing a dress softly jogged past as I was walking.

After drinking an entire 12-ounce bottle of Gatorade at the beginning of the fifth lap, I decided enough was enough and I was going to try to run without walking the rest of the way. After all, there were only five miles left.

I ran past the dress-wearing woman on an uphill. From there, I gained a lot of momentum on the downhills. I ticked off a couple miles running 9:XX/mile pace. That’s still very pedestrian, but these were already my quickest miles of the day.

They’d get faster yet as I realized, by golly, my legs actually felt pretty good!

With a mile and a half I was speeding by other runners like they were standing still. With less than a mile to go I went by two runners so fast that one of them exclaimed, “woah!”

“I’m almost there,” I explained. Normally I hate those words in a marathon unless they were uttered 200 meters from the finish line because late in a 26.2-miler, even a half-mile can seem like an eternity. But this time, I was actually feeling really good and was eager to sprint into finish.

I ran the last half-mile at 6:40/mile pace. Granted, part of it was downhill, but this was de facto Speedy Gonzales compared to the 10:20/mile I’d ultimately average for the whole race.

I was momentarily running 6:02/mile pace at the time I crossed the finish line. Surprisingly, my final time was only one minute more than the day before.

This was probably the first time during a marathon that I actually felt much better at the end than at the beginning. Moreover, the next morning I felt better than when I woke up before this marathon. It’s like jogging/walking the first 20 miles on rolling terrain had actually helped my body recover. Odd.

I didn’t even need to resort to walking down down stairs sideways the rest of the week.