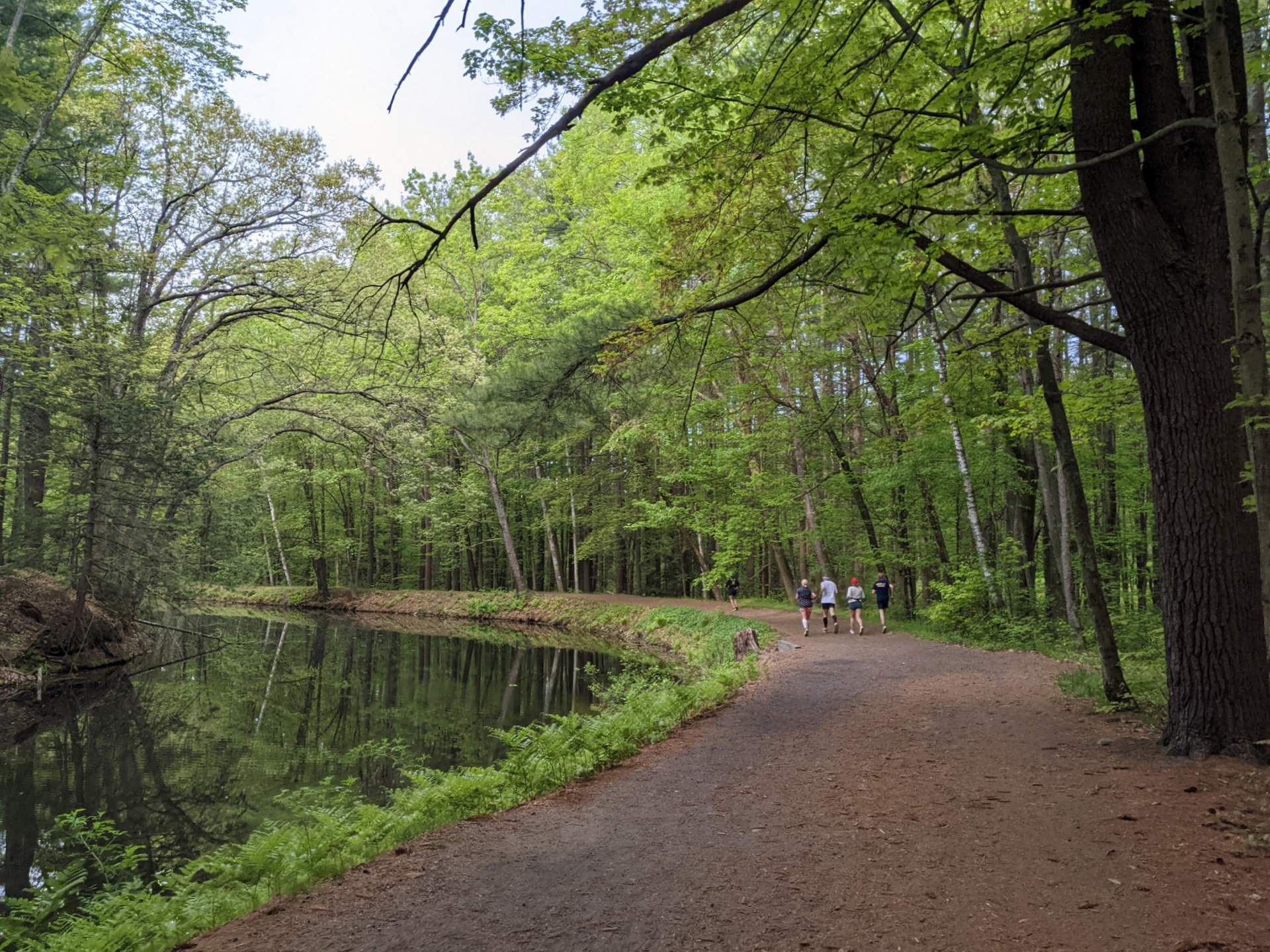 At the mass start of the Granite State Marathon with about 70 other runners listening to pre-race announcements by JC, the organizer of the New England Challenge, I heard a familiar name called out to the right side of me in the crowd.

“Bob Kennedy,” someone said to a white-bearded man standing only four feet away. I immediately wandered over, tapped Bob on the shoulder and said, “Bob… Felix from Fort Collins.”

I first met Bob five years ago when he came to the Fort to organize the first and only Cache La Poudre Marathon and contacted the Fort Collins Running Club for a modicum of support, like getting a few runners to participate in the race. Never mind that the race wasn’t exactly, er, legal (more on this in a little bit). With a mere 21 runners, the size of the “race” was smaller than a lot of training runs. Also with such a small size, I won the race in a time that was anything but world-beating (3h28m, coincidentally the same time I ran yesterday in Marathon #1 of the New England Challenge on five-years-older legs). Fun memories for sure.

I didn’t know that Bob was going to be here at the Granite State Marathon. I shouldn’t have been surprised. After all, Bob lived in the Granite State (New Hampshire). He also had already run 241 marathons before this one, including one in every state (46 in under four hours). Even more impressively, he had won his age group in a race in every single state. The only states he wasn’t able to run a sub-4-hour marathon in were the ones at altitude—including my own state of Colorado (at his Cache La Poudre Marathon, he ran 4h27m at age 68, and later 4h7m at the REVEL Rockies marathon)—but nevertheless, he had run a Boston Marathon-qualifying time even in those states.

A mile into the race Bob and I were still chatting and he mentioned that today he wanted to try to break the state marathon record for 73-year-olds.

Since this was my second marathon in two days, my own pre-race goal was merely to finish, although I thought finishing in less than 4h30m would be nice. Coincidentally, Bob said if he could run 4h30m, he’d have the record.

Suddenly, I had more motivation: I wanted to see Bob break the record. So I ran with Bob, thinking that maybe I could help encourage at the end.

Fortunately my legs were feeling decent despite running my fastest marathon in four years the day before. During he first few miles, we reminisced about how Bob “almost went to jail” for organizing the Cache La Poudre Marathon without a permit and somehow the authorities found out about it and summoned him to court, but he managed to get the case transferred from Fort Collins to a federal court in New Hampshire so he wouldn’t need to book another flight. In New Hampshire, the prosecuting attorney asked the judge to take it easy on him saying that “he was a good guy.” Ultimately Bob was slapped with a reasonable fine.

We were joined by other runners now and then, and while we weren’t always running side-by-side particularly because I was taking a 0.08-mile walking break after every 0.92 miles of running, we were always within conversation range.

“Yes, and we’re well on pace for four hours and thirty minutes,” I replied. “We can even have a little bit of a positive split, but not too much.”

The course was five laps of a five-mile loop through the forest (an out-and-back section was added at the beginning to make the distance a certifiable 26.2 miles). We were both still feeling fine with one lap to go. When there were only three miles to go, Bob said something like “ok, just five kilometers now.”

Soon after that, he was visibly tiring. I gave him a piece of advice that someone gave my Stanford ’97 classmate, Nick Thompson, in his own record-breaking run a few weeks ago.

“If it feels hard, think of something harder,” I said. Bob laughed.

The last couple miles I was running ahead of Bob, trying to keep the steady pace he was doing all race up to that point. But I think Bob’s legs were really fatigued, because he needed to take some walking breaks despite having no more hills to go up and the proximity to the end. When he did I waited and tried to shout some encouragement about the mere miles to go.

Finally, the final turn was in sight and I took one more glance behind me to make sure Bob was still there. I saw a runner wearing a white T-shirt right behind me and thought it was him.

But when I jogged over the finish line and busted out my phone to get a photo of Bob crossing it… it was a woman instead! I waited for another thirty seconds and was so confused. Where was Bob?

I’m not sure exactly what happened, but Bob came in yet another minute behind. His final time was 4:30:50.

The first thing Bob asked for was if anyone had a cold beer. Unfortunately, no one did, so Bob had to settle for a chair instead.

“I really suffered more than usual [at the end],” he explained.

“If you suffer, you know you tried hard enough,” I reassured him.

After Bob rested a little, we got a finishing photo taken together.

Compare it to a photo taken five years earlier when Bob was presenting me with the overall first place award at the Cache La Poudre Marathon in October 2016. We don’t look too much different from then, yes?

I was even wearing the same white singlet!

It was great to see my friend after all these years and run with him to what should be a New Hampshire state marathon record for 73-year-olds. (Much respect goes to Bill Engle who held the record for 17 years, running 4:33:17 on January 1, 2004.) Congratulations, Bob!