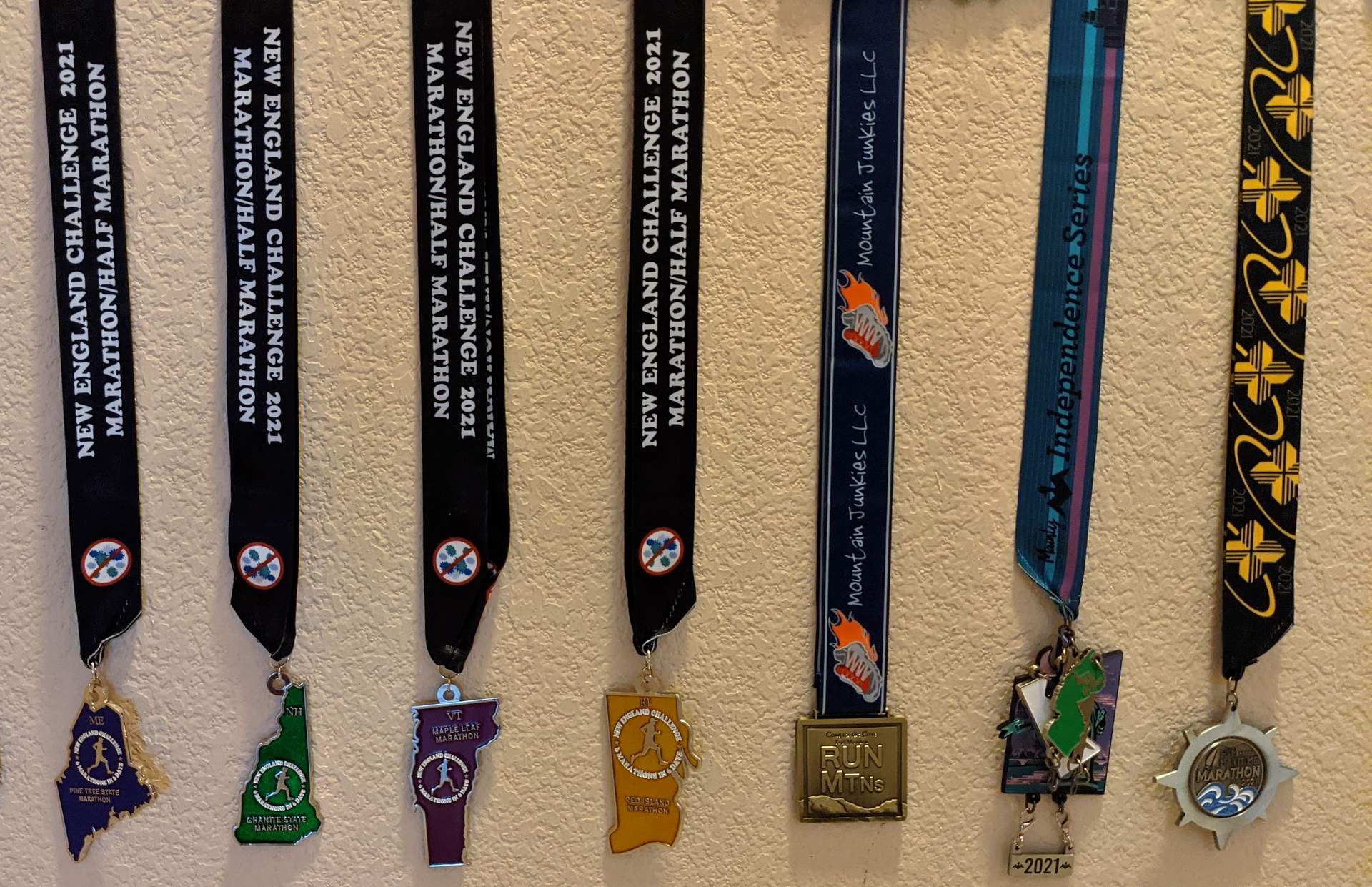 During the pandemic I had resolved that one of the first things I’d do when I was fully vaccinated was to take advantage of the consistent training I had been doing and check off a bunch of marathon states. So when it became clear I’d get my final Moderna shot by the end of April, I started looking for races for mid-May and beyond.

Ultimately, I went a little nuts with the 26.2-mile events and did eight in four weeks! These are the marathons I did:

I was particularly happy to finish five of the eight in less than 3h45m. The one in Virginia was too technical for me, and I couldn’t run the races in New Hampshire and Vermont in sub-4 hours due to having only 20 hours of recovery time after the previous marathon. But apparently 68 hours in between 26.2-mile runs was enough to trot at a my usual marathon pace, and going sub-3h45m in five of them definitely exceeded my initial expectations.

Somewhat surprisingly, I enjoyed the first four events much more than the last four. The last four were afflicted with heat, challenging terrain, dull courses, or some combination of those factors.

Of course, I was happy about increasing my marathon states count from 39 to 47 so quickly. Getting to 50 before age 50 will require doing only one marathon state a year now.

A month ago, I really had no idea how the marathons would go. Would I burn out? Be perpetually sore for days? Get injured? Have to walk some marathons? Happily, the answer to all those questions was no!

Instead, I learned that:

While the marathons on the whole went much better than I initially expected, unfortunately I did not complete them unscathed. Most of the damage came from Marathon #6 when I tripped and fell on the final tree root with 400 meters to go, and Marathon #8 in which I got a farmer’s tan (no sunburn though) and three black-and-blue toe nails from toes jamming against the front of a pair of Nike Zoom Streak 7s. I regrettably used those for the final race instead of my usual Puma H. Street or Lems Primal 2 shoes in a futile attempt to eke out an imperceptible amount of more speed.

I also lost about three or four pounds by the end of the above runs. While you might think that is a good thing, a lot of it was muscle. As I always struggle to keep weight on in the summer, I’m going to have to try to both eat and lift more in the next few months to not lose any more.

The distinct tan lines will fade within 3-6 weeks as long as I avoid the sun during peak hours. The arm scars from the fall, while not very deep, will probably take another 2-6 months to fully fade. I expect to have the black-and-blue toe nails for the next 10-14 months since toe nails grow only 1.5 millimeters a month and the black-and-blue parts are currently at the base of the right big toe and left and right second toes.

They are all battle wounds that I’d rather not have, but will serve as reminders of this remarkable period of marathon mania.