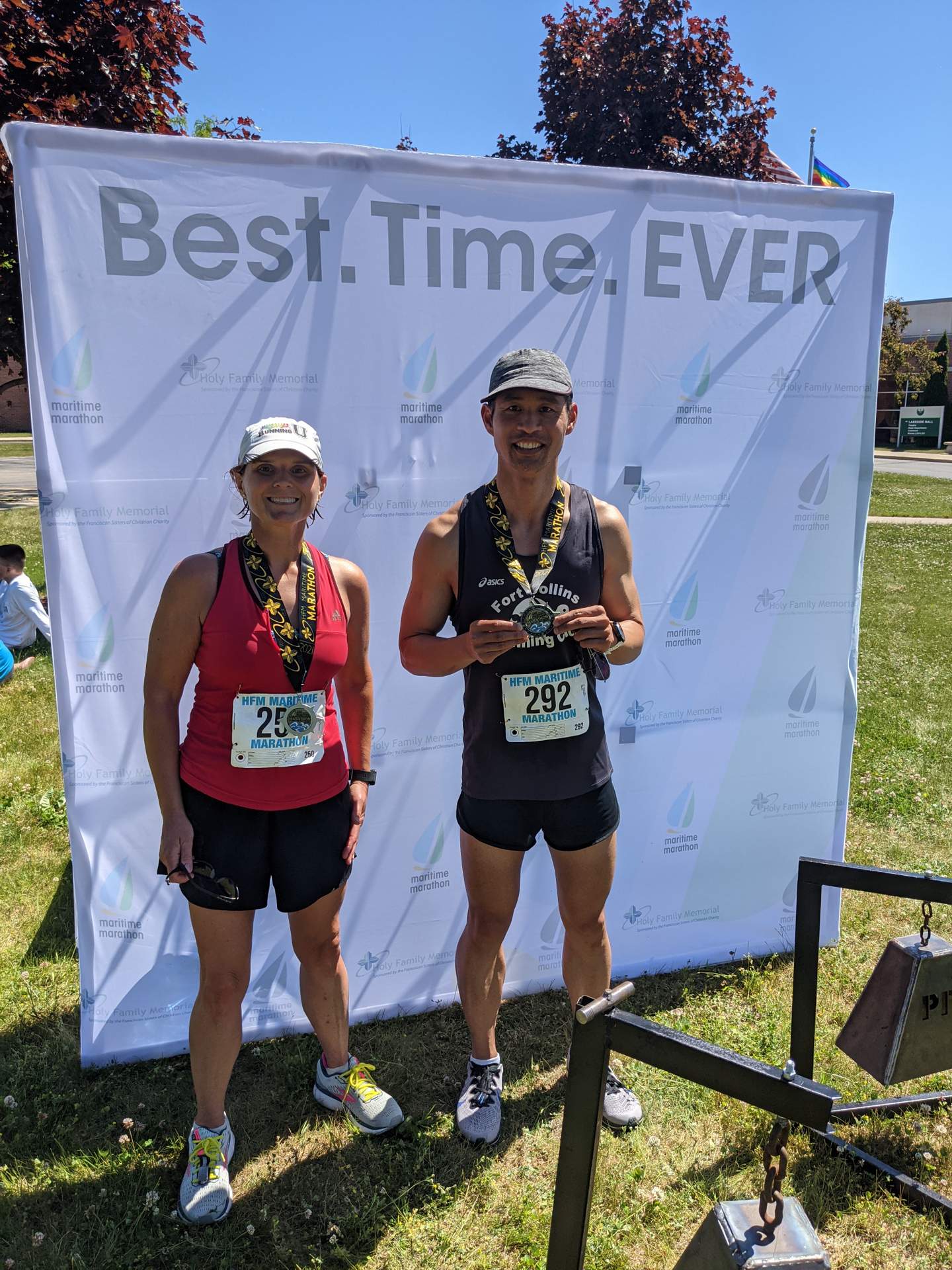 If the last seven marathons over the last four weeks had proved anything, it was that I could maintain even splits over 26 miles with only a modicum of slowing in the final miles, and that my body could recover for another long-distance race with only a few days rest. So I had high hopes for my eighth and final (for 2021, I think) marathon on a flat and fast course in Manitowoc, Wisconsin.

Not only would I have a whopping five days of rest and recovery, but for this paved road course, I’d be using a pair of Nike Zoom Streak 7s that I used to good effect in the 2019 Marshall University and 2020 Run Hard Columbia marathons. I got those shoes after the New York Times concluded in a statistical analysis that the Zoom Streak 7s yielded a performance benefit almost as good as the multiple record-holding but much more expensive Nike Vaporflys, and in both of those races, I finished in 3h31m. Since in the first marathon of this year I ran 3h28 in 2012 Puma H. Street shoes, I believed I was in better shape this year and that the Nikes could maybe help me achieve a 3h25 finish on this day.

The main concern about the Maritime Marathon was about the weather. By mid morning, the temperature was forecast to be in the mid-seventies already. And the midwest is famous for having humidity.

Even that concern was allayed some as my friend Mel—another Fort Collinser who has a goal of running a marathon in all 50 states—and I were hanging around the start area before the race. An announcement was made over the public address system, and while I didn’t hear any of it, Mel heard the words “optional 6:30 start.”

“Did they just say we could start at 6:30?” Mel asked. Happily, the answer was yes—meaning that we could get a 30-minute head start on the heat. Even though we learned about this optional start time seven minutes before 6:30, we were both ready so we just walked 50 feet over to the start line.

Surprisingly, only about a dozen participants partook in the early start. Part of the reason for that might have been because the race director said the early aid stations might not be ready yet because they were supposed to be set up “for the first seven o’clock runners running a six-minute-per-mile pace.”

As I wasn’t planning on grabbing my first cup of Gatorade until Mile 6 anyhow, that was of little concern to me. I was more eager to get the show on the road and have a better shot at hitting my time goal due to the lower temperatures.

“Hopefully I’ll be done by ten o’clock,” I told Mel.

Soon after starting, however, I learned one of the downsides of commencing that early: there was no one to follow due to being the fastest of the small group of early starters. That meant I had to stay as alert as possible to Not Miss A Turn. The front runners also usually feel a little more pressure to not get caught. Lastly, there would be no official pacers to run with.

The way I remediated the latter issue was using the Garmin Forerunner 645’s Target: Distance & Time function set to marathon and 3h25m. The watch would tell me just exactly how much ahead or behind that target I was during the race. Essentially, it would be my pacer.

This strategy worked well in the first half. In the first few miles, I banked a whole minute and maintained that amount to Mile 11. Meanwhile, I managed not to get off course thanks to it being well-marked with orange cones and volunteers standing at crucial turns. The course mostly followed the shoreline of Lake Michigan.

When I crossed the timing mat at Mile 13.1—the halfway and turnaround point—the Garmin read 1h40m and I still was 40 seconds ahead of the 3h25m goal… if only I could maintain the pace.

I was still feeling decent a mile later when I saw Mel coming the other direction—meaning that she was only two miles behind and that she was going to do the first half in sub-two hours. (In fact, she did it in 1h59m.) She did yell to me that she was “going to be slower in the second half.”

Sure, I thought, but how much? I figured to be slower in the second half too, but hopefully by only a couple minutes much like my first and seventh marathons of the last month.

As it would turn out, that would be wildly optimistic.

Firstly, I could tell that one of my toes was blistering and also jamming against the front of the shoes. (Unfortunately, this resulted in having four blackened toenails that I’d have for the rest of the year.) Maybe, I thought, I hadn’t tightened the shoe laces quite enough.

Secondly, it was getting hot. The problem wasn’t so much the temperature, but because there was not a single cloud in the sky and the humidity was 94%. Crucially, there was hardly any shade either. Only twenty minutes into the race I already had perched the sunglasses on top of my hat instead of in front of my face because of how much sweat was dripping into my eyes.

At Mile 17 the Garmin warned me that all the time I had banked previously was now gone. I managed to hold pace for a couple more miles before I could already tell it was going to be a slog the rest of the way.

Curiously, it wasn’t so much my legs. They were feeling ok and never cramped up. It was a general feeling of overall fatigue and malaise. The right toe blister didn’t help. Nor did respiratory alkalosis, something I’ve struggled with in many marathons in the past but had yet to experience all year until now.

What is respiratory alkalosis? As a friend’s dad who is a medical doctor explained to me at the finish of the 2019 Colorado Marathon, it’s when the level of carbon dioxide in the blood decreases due to breathing so much of it out, thereby increasing the pH level of the blood. While I didn’t think I was ever breathing that hard during the race, I knew the symptoms of respiratory alkalosis well: numb hands, sore arms and shoulders and a general sense of unease.

Maybe I had run the first half slightly too fast. But I think in this case, the primary culprit was the heat. If it was only 20 degrees Fahrenheit cooler or there was shade or clouds, I think the second half would have turned out better.

As it was, I was rapidly losing time and had to readjust my goals accordingly. I was not feeling well and even walked through the last aid stations, which thankfully were frequent (there was even one with a half-mile to go). At those I resorted to grabbing two cups of water—one to drink and another to douse and cool myself—and a cup of Gatorade to chug.

With a quarter-mile to go, the first place woman—who started at 7:00, meaning that she had covered the same distance in 30 fewer minutes—trotted by like I was walking backwards. I gave no chase until I saw the finish line with a tenth of a mile to go, which I “sprinted” at a measly 8:02/mile pace.

But my final time was 3h38m, which all considering was satisfactory considering the heat and the performance meltdown the last 6-8 miles.

It wasn’t the result I was hoping for, but at least I was pleased with the 1h40m first half. I had also successfully concluded an epic stretch of eight marathon states in four weeks, something I am unlikely to ever do again in my lifetime.

I got four black toenails during the Maritime Marathon. It took five months for them to grow out.

This effectively ended my experiment using Nike Zoom Streak 7 shoes. I used only Puma H. Street shoes to finish the rest of the marathon states.