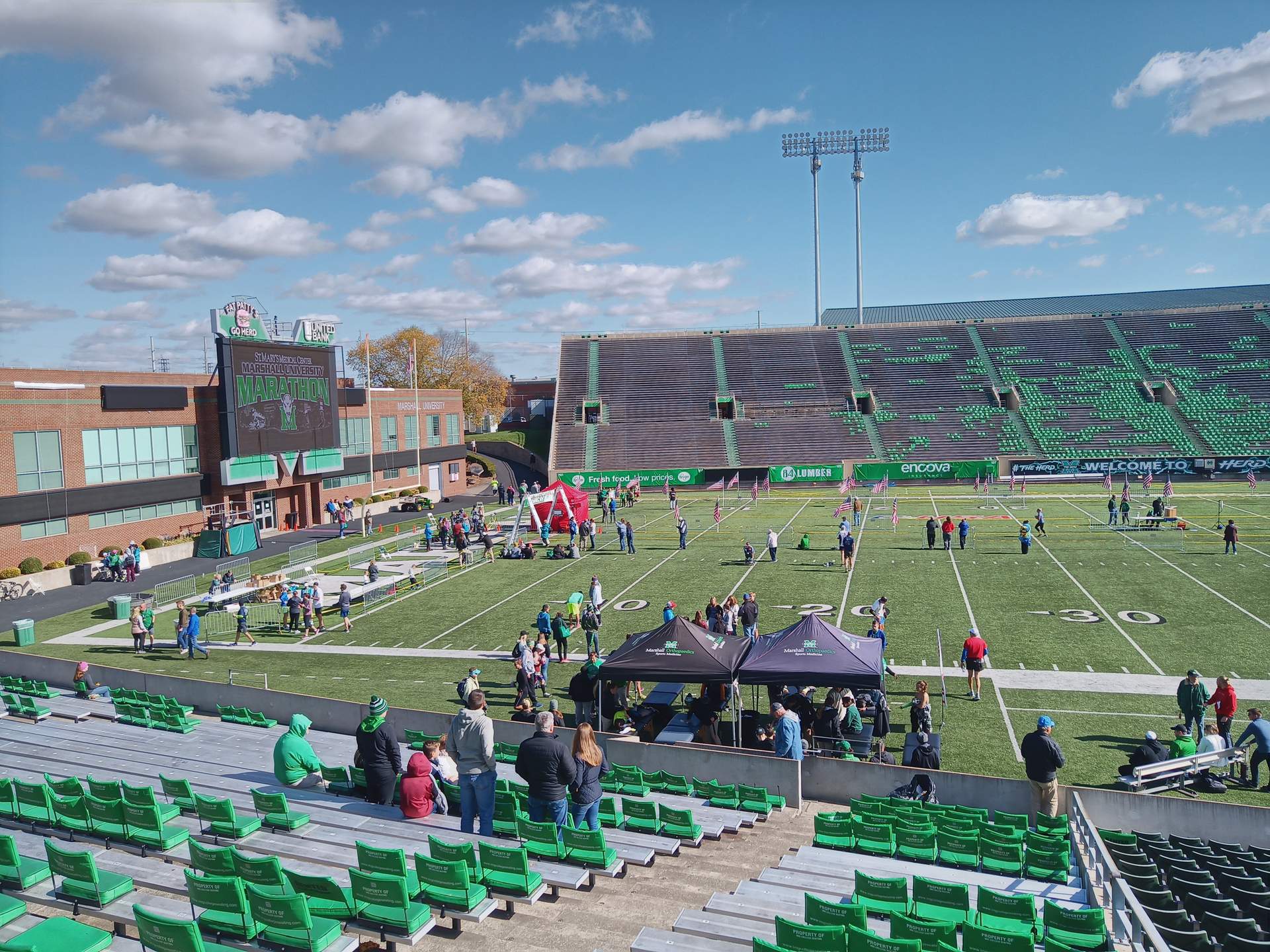 From the double marathon weekend of September until now, I only did one double-digit training run (an 18-miler 10 days ago that completely exhausted me), so I knew that I was going to have to run very conservatively in order not to have an epic collapse towards the end of the Marshall University Marathon. Moreover, watching Eliud Kipchoge run a sub-two hour marathon in Vienna last month reminded me how running even splits is the best way to achieve an optimal time—assuming that the course is flat, which Marshall’s two-loop course was.

So the strategy for today’s race was simple: stick with the 3:30 pacer and run like a robot. Try to hang on for as long as possible.

The conditions were definitely conducive for a strong effort. The temperatures were in the 30s (Fahrenheit) for the whole race. This was cool enough to wear a knit hat, long sleeved shirt, and dollar store gloves, but warm enough to wear skimpy shorts.

I also tried a new shoe—the Nike Zoom Streak 7—making it the first time in 14 years I tried running a marathon in something other than minimalist shoes. I was compelled to give them a go after reading about an independent statistical analysis by the New York Times that concluded that the Nike Streaks provided 75% of the famed Nike Vaporfly 4% shoes’ benefits at 36% of the cost. My thoughts on these shoes are presented in a later section.

Anyhow, back to the race: the 3:30 group contained a whole gaggle of people running next to or behind the Nick the Pacer, who occasionally yelled out helpful reminders such as, “remember, the first 17 miles are a warm-up.” I tried to guess early on who was going to last and who was going to fall off. My first pick for the latter was a tall dude who I’d later call “the bouncing man” because of all the vertical movement he was displaying in contrast to the other runners who were markedly more smooth. Sure enough, right before the half-marathon mark, he was off the back.

After the 17-mile warm-up—which is when I have started to falter during all five other marathons I’ve run this year—I was still in the thick of things and actually still feeling pretty good. We lost maybe one or two people between then and Mile 20, but there was one guy who actually caught up to our group of now seven asking, “Where’s all the women?”

Nick pointed to the lone female in our group. Unfortunately, she soon afterwards fell off the pace.

The next couple miles was when mayhem began for our group. With every mile, two people fell off the back. By Mile 22.5, it was only Nick and I remaining, running side-by-side. And then a surprising thing happened.

“My calf is cramping,” said the pacer, who immediately slowed. “You’re going to have to do it on your own.”

I was starting to feel the fatigue but I was not slowing. I said my thanks to Nick for doing such a good job pacing and focused on an escapee ahead, someone who managed to get ahead of our group a few miles ago. For a little bit, it seemed like I had a shot at catching him.

But then with less than two miles to go, a woman I had not seen all day sped by, and it was clear that I was slowing a little bit. Not catastrophically, mind you, but enough that I was now just doing my best to maintain the pace.

With a mile left, volunteers handed me a flower to place by Memorial Fountain 100 meters further, which was created to remember the 75 people who died in a November 14, 1970 plane crash, including nearly all of the Marshall University football team. To date, the crash was the biggest sports-related disaster in U.S. history, an event that was the basis for the 2006 Disney movie, We are Marshall. A moment of silence, please.

Shortly after, I could hear Nick saying some things behind me. With 1000 meters to go, he had caught me. Way to battle back from that cramp!

He did his best to encourage me the rest of the way. He exhorted things like “half a mile to go,” and “COME ON!” while sensing I was faltering. As much as I wanted to dig deep, I just didn’t have the fitness. I tried to maintain the best I could.

Then we entered the Joan Edwards Stadium, where the Marshall Thundering Herd play their football games. A volunteer gave me a football, and I then tried to do my best Terrell Davis impression. Nick had a gap on me but I did all I could to close the distance. Strava said I averaged 7:00/mile for those last 400 meters, which at this point of the race was definitely satisfactory. Ultimately, I finished four seconds behind him.

My pre-race goal was sub-3:30, but my final time was… 3:31:06. File this one under so close race effort, something that has been happening a lot this year.

“I’m sorry I couldn’t get you through,” Nick said afterwards after I thanked him again for the pace setting. I thought he did an admirable job, running super even splits, working through the Mile 23 cramp, and urging me on during that final mile. My legs just couldn’t quite hang and mentally I just seemed incapable of fully emptying out the “suitcase of courage,” as famed Tour de France broadcaster Phil Liggett liked to say.

Oh well. I nearly achieved an even split, which was something of a victory in itself. Considering the sub-optimal training, I’m happy with it.

For the future, in addition to being in better fitness I’d like to work a bit on developing greater mental fortitude. This might include some envisioning exercises like recalling those memories of Eliud Kipchoge looking so strong and confident in the final miles of his sub-two historic run.

About those Nike Streaks

It’s impossible to make definitive conclusions about the shoes considering that each of the six marathons I’ve done this year were done under vastly different conditions (e.g., hills, snow, altitude with downhill, heat), fitness levels and pacing strategy.

What I would say after today, however, is that I don’t think the shoes are slower than my usual Puma H-Streets despite weighing about 1.5 ounces more, and the greater amount of cushioning might have allowed me to keep up the pace longer.

Other than having more cushioning and arch support than my Pumas (which is not saying too much), they don’t feel that much different, especially in regards to speed.

More experimentation is needed, but for the moment, I think I’ll continue using these shoes for longer distances (half-marathon and up) and the Pumas for shorter ones.

One-and-a-half years later, I ran the Pine Tree Marathon wearing the Puma H. Streets. It was only a couple minutes faster, so I still would continue to say any difference in performance attributable to the shoes is negligible.

But then I ran the Maritime Marathon using the Nike Streaks and ended up with four black toenails despite having the same shoe size number. I suppose the shoes run small, if only slightly. Whatever the case, I stopped using the Nike Streaks and sold them on eBay for a fraction of their original price. It took five months to not have black toenails anymore.