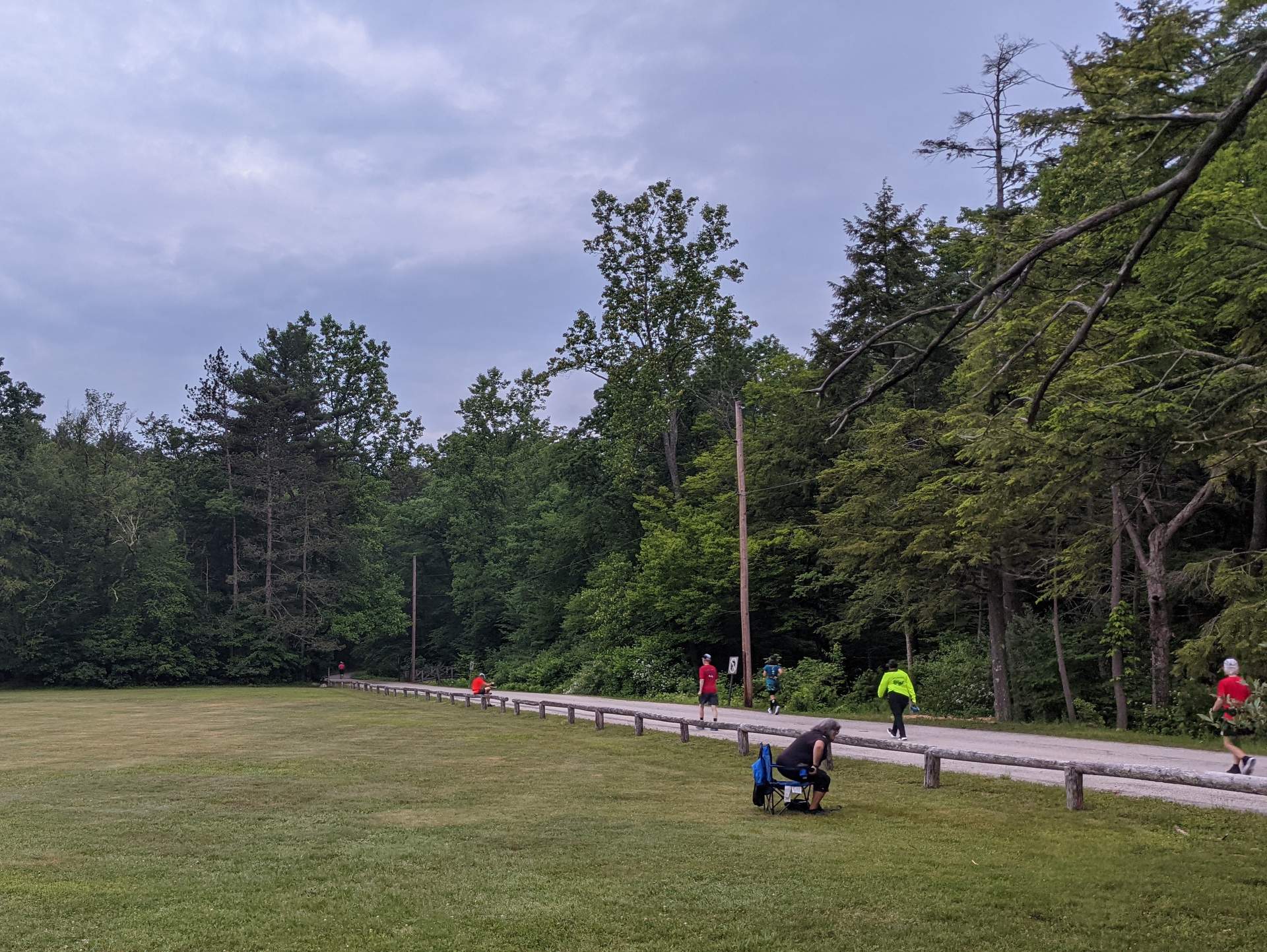 Having the suboptimal experience of the marathon in Delaware put on Mainly Marathons a few days ago, I came into this event with lowered expectations regarding organization, course, and my own performance. Lowering them further was the weather forecast: the East Coast had a record-breaking heat wave the last few days, and even with a six o’clock start time, the temperatures would be in the mid-to-high 70s with over 90% humidity for the entirety of the run.

On top of that, there would be significantly more uphills than in Delaware marathon. Also, despite the course being a mere 1-mile length, half of it would be on a road that sometimes had cars driving on it.

At least the course was pavement and we had to run “only” 14 out-and-backs this time.

Daniel, the race director, led the first out-and-back lap, which was much appreciated considering how I got confused during the first lap of the Delaware marathon. Then he peeled off and almost everyone was walking already. Among the participants doing the marathon (instead of the 10k, half-marathon, or 50k options), there were literally only three guys and four women trying to run the whole distance.

One of those guys, Ezra, caught up to me on the third lap. We talked for a bit. Ezra, a muscular and obviously fit dude, used to be in the army, which brought him to his current hometown of Colorado Springs. He stayed there even after becoming a lawyer, and we’ve run some of the same marathons in Colorado. This was the first and only marathon he was doing in the Independence Series.

In addition to living in the same state and being in our forties, we even had similar objectives.

“I’d be happy with anything under sub-four hours today,” I said.

He then asked me if I was still planning on doing marathons after completing all 50 states, which I anticipate will happen in the next few years.

“I’m thinking of going back to some of the states I haven’t run sub-four hours in,” I replied.

He looked at me and exclaimed, “Me too!”

Shortly thereafter, we were joined by the third guy who was actually running: Jason of Vermont. He mentioned this was his fourth marathon in as many days, having signed for every run in the Independence Series.

“You are running really well considering this is your fourth marathon in a row,” I said.

“Thanks,” he replied. He then started talking with Ezra, who was now a few steps behind. Like Ezra and I, he had done Ironman triathlons and wanted to run a marathon in all 50 states. But his plans were even more ambitious for the short term.

I stayed a bit ahead ahead of Ezra and Jason until the end of Lap 7, which was the half-marathon point. After grabbing a rubber band I grabbed my water bottle and asked for a refill with Coke. (Only volunteers wearing gloves were allowed to handle the refills.) Since that took 20-30 seconds, Ezra got a little ahead of me for half a lap until he had to stop for a refill. From that point on, we stopped swapping leads as he was fatiguing more quickly than I was.

In fact, I never really did tire too much and was able to maintain even splits until the very end, maintaining 8:XX/mile every mile for a 3h44m finish. The final lap Ezra and I fist-bumped as we passed each other in opposite directions—by that time he was just over a mile behind—and he was able to finish in 3h58m. The two of us Coloradoans were the only ones who completed the event in under four hours.

After finishing my clothes were completely saturated in sweat, and as someone pointed out, I was covered with so many dead bugs that “it looks like you ran through a bug cloud.” So I didn’t hang around long, opting to return to the hotel that was a 20-minute drive a way in order to shower.

Thoughts About the Independence Series and Mainly Marathon Events

As I mentioned in this writeup and the one about the marathon in Delaware, the marathons in the Independence Series—and probably Mainly Marathons’ other series as well—are not your typical 26.2-mile events for the following reasons:

There are also no marathon expositions before or after, and Mainly Marathons didn’t strike a deal with any “host hotels” to give discounts for marathon participants.

If the above sounds to you like the events aren’t real races and sound boring and no-frills… I would not argue otherwise.

I finished each event thinking that I might as well have just loaded up my car with three Gatorade bottles, driven over to a state park, run an out-and-back or loop section that passed by my car multiple times (but less than 14 or 16 times!) to drink fluids, and timed the run with Strava. Honestly, it would have resulted in faster times, not having to contend with so many marathon walkers blocking the path, pick up rubber bands to count numerous laps, or having to wait for the volunteers to refill water bottles. It also would have been much less expensive.

This is because each of Mainly Marathon’s 26.2-mile events are generally priced like big city marathons that have a closed course, police officers directing traffic, live bands playing music every few miles, a dozen aid stations, a post-race party, and thousands of spectators. For example, the registration fees are as follows:

This makes the Mainly Marathon events an extremely poor value in my opinion, the worst of all marathons I have run in my lifetime. For the registration price, the main things you are getting versus running on your own are a t-shirt, participant medal, and the opportunity to mingle with other marathon walkers.

Your results are published too… but if you merely ran on your own, using a GPS tracker (even your phone) with a (free) app like Strava is already good enough “validation” if that’s important to you.

I’m happy to have checked off a couple marathon states and am also lucky to be able to afford such expenses. But for anyone considering signing up for Mainly Marathon events, I’d strongly suggest considering running on your own in a nice park somewhere on your own time, as there really isn’t much of a difference.

In my case, I will be a lot more selective about the marathons I sign up for in the future.