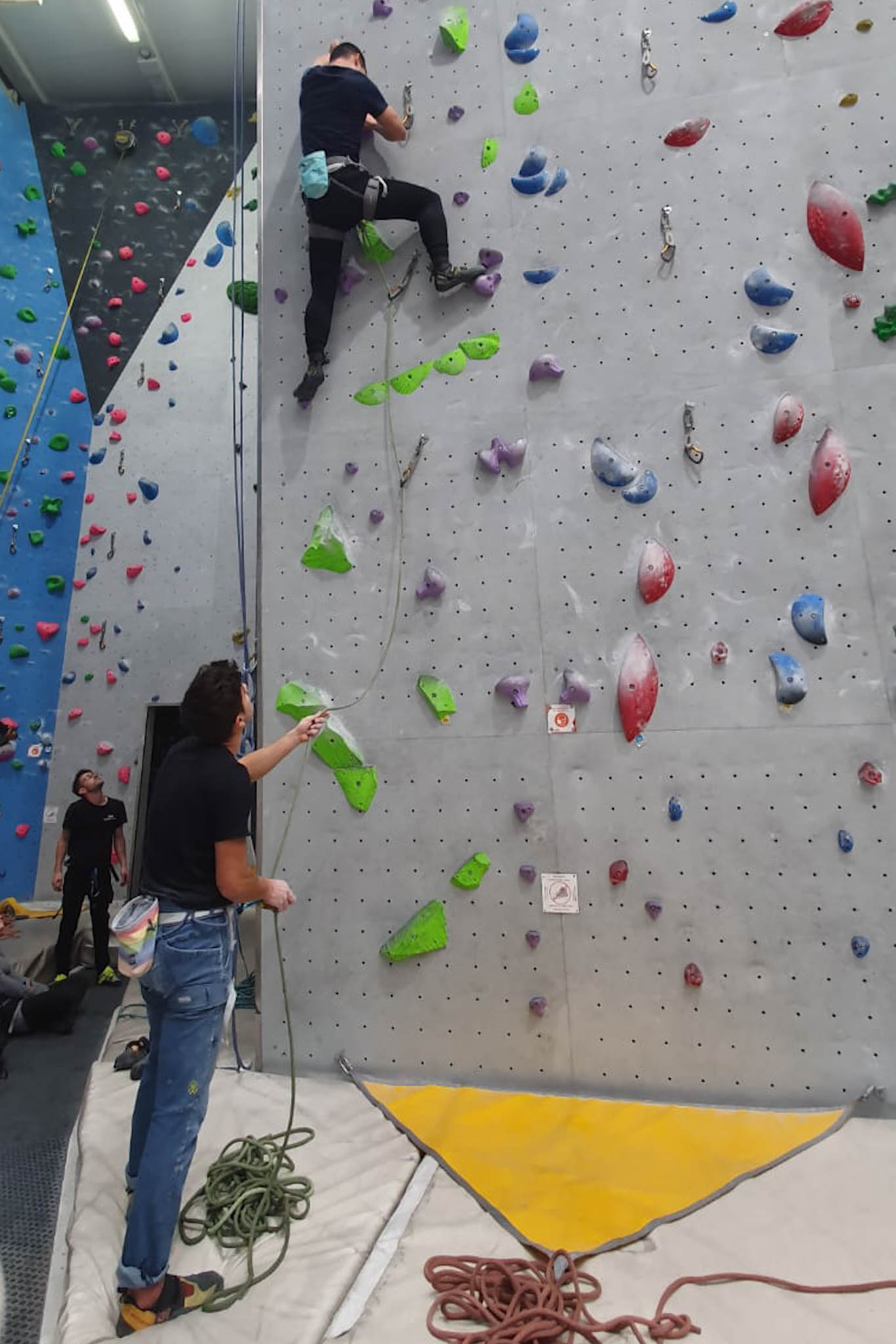 A few weeks ago, Andrea and her friend Tamara introduced me to Marcos, Tamara’s boyfriend. I was excited to meet him because he is very adventurous. Marcos went on a rock climbing excursion in Mallorca in March. He is also planning on mountain biking from Lisbon to Porto in May. I instantly liked him.

He must have thought I was alright too because he invited me to go indoor rock climbing with him. Before that, I did not believe there would be opportunities to do so. That would explain why I had left my rock climbing gear in Colorado. Of course, climbing gyms rent equipment like shoes and harnesses.

We climbed at a rocódromo in Santiago de Compostela. It used to be named The Other Climb, but now is called Indoorwall. Indoorwall is a franchise with 15 climbing gyms in Spain.

I had last climbed on March 5, 2020, in Fort Collins. That day was one week before the United States went on lockdown for the COVID-19 pandemic.

At that time, I did not imagine that the next time I would climb would be two years and two months later. I definitely would not have predicted it would be in Spain!

Climbing for the first time in a different country meant there was some preparation I needed to do.

First, I needed to learn rock climbing terminology in español. Below is a list of terms I deemed crucial.

I got most of these terms from OpenBeta’s Essential Spain: Spanish climbing vocabulary.

Another thing I had to learn was a different rating scale.

In the United States, people rate climbs with the Yosemite Decimal System (YDS). In Spain, the French System is more common.

Below is a conversion chart. I list only the ratings for climbs I would do in a gym. Anything less than 5.6 YDS (4b France) is too easy. Climbs rated 5.12a YDS (7a+ France) and above are beyond my ability.

From the above chart, I surmised that I should be doing only 5s and 6s. The 5s are easy to moderate. The 6s are moderate to difficult. Anything lower would be a waste of time, and anything higher would be beyond my capability.

We checked in with the registration desk. Since it was my first time, I had to fill out a form and waiver.

Surprisingly, I did not have to do a test to show that I could belay or lead climb safely. In American gyms, those tests are mandatory if you want to do either.

This gym had many automatic belay devices serving as a toprope. I did my first three climbs on auto, including a 5, a 5+, and then a 6b. The first two were easy. I climbed the third route well until two moves from the top. Then I peeled off the wall.

My fourth climb, a 5, was on lead. I did it cleanly. After that, we moved on to some bouldering problems and then lunch.

After eating, Marcos’ friend Angel arrived. His presence was great news for me because it would allow me to rest more. My forearms were useless by this time. I could not even get five feet off the ground on a 6a!

In contrast, Marcos and Angel successfully led several climbs rated 6a, 6b, and 6c. Eres una maquina, I said to Marcos. We had been climbing for hours and he did not look tired.

I finished off the day with two more climbs rated 5. The first one I did cleanly on auto, which increased my confidence that I could still climb something. Then I led another. I took a fall two clips from the top due to exhaustion but was able to complete the route moments later.

Marcos and Angel told me that there is a small climbing gym in my town of Pontevedra. I will need to check it out sometime.