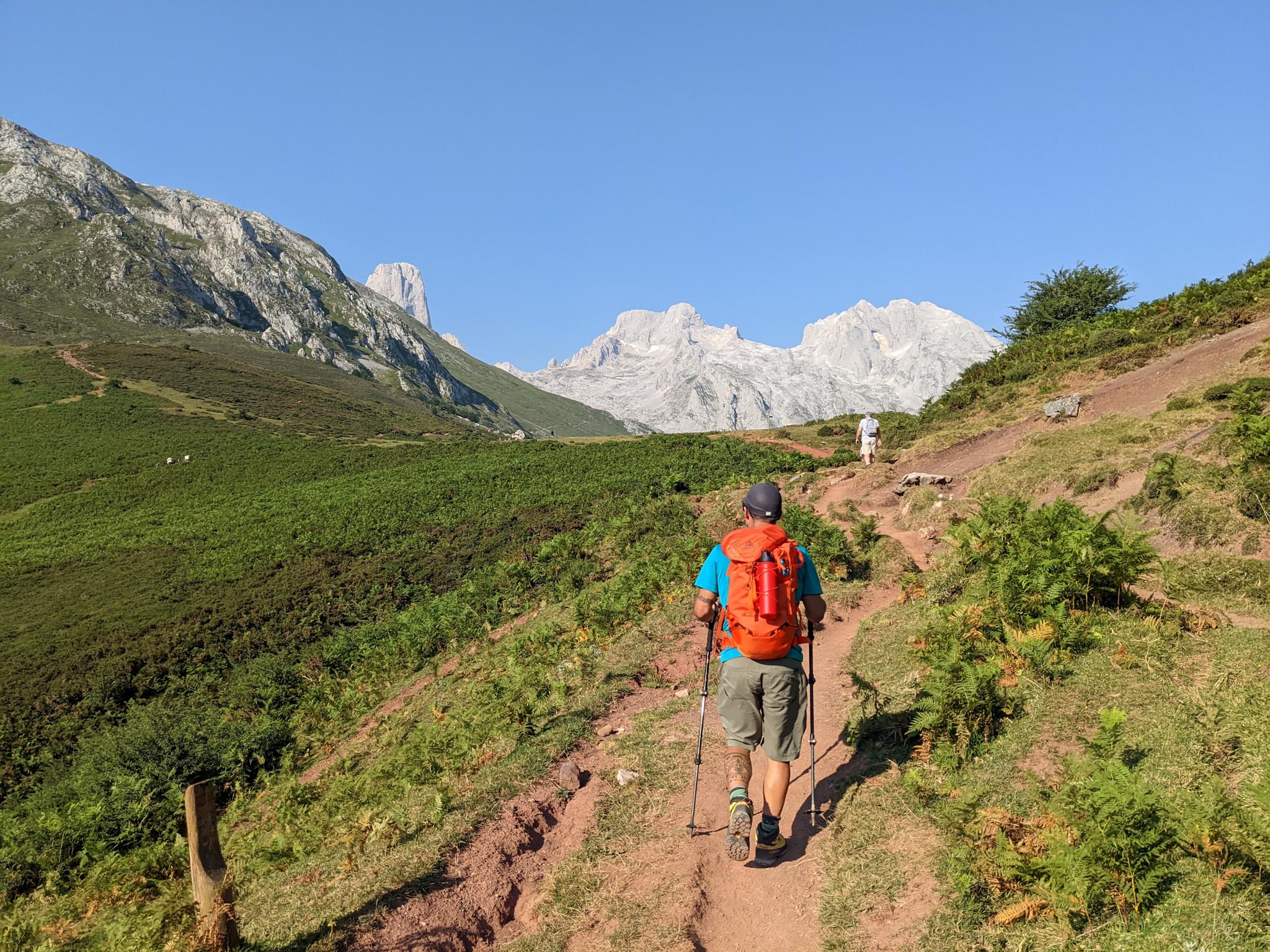 For our second adventure in Asturias, Marcos and I hiked 30 kilometers in the Picos de Europa mountain range. Specifically, we trekked past a crag called Urriellu, up the Torre de los Horcados Rojos where there were a couple of dozen cables, and continued to the start by passing the Refugio de Áliva.

We started in Sotres where we stayed in an albergue (hostel) the night before. A very friendly and helpful shop owner named Raquel allowed us to store our bicycles in a storage room in her store after we talked with her for nearly an hour. In the morning, we drove from the center of Sotres to a parking lot near rustic homes by the trailhead.

The start of the hike was mellow, but after a few hours, the trail got rockier. The closer we got to Torre de los Horcados Rojos, the more technical the trail became.

En route, we passed by Urriellu where one of Marcos’ friends had climbed the day before on a multi-pitch route. Marcos was hoping to be able to climb it too this week, but that never panned out. (I have only climbed once since the start of the COVID-19 pandemic, and therefore did not have the form to climb. Besides, after the terrifying rock climb up the back side of Half Dome, I think I am done with big walls.)

Near Urriellu were a couple of dozen teenagers watching a helicopter going back and forth over the mountain and occasionally landing on a nearby landing site. Marcos later heard that a girl from summer camp had twisted her ankle, and a guy had hurt his leg. Due to the remoteness of this area, the only way they could get out was by helicopter.

Shortly after that, Marcos warned me to be careful on the Torres de los Horcados Rojos. He explained that while he had insurance for an evacuation by being a member of a mountain climbing club, I did not and would be on the hook for three thousand euros if a helicopter had to rescue me.

He didn’t have to warn me twice. Having enough accidents and medical issues last month, I was going to be very careful, even if it meant going slow.

Marcos had taken a mountain climbing course in Asturias and gave me some helpful tips like taking shorter steps and using the full surface area of the sticky rubber of the Mammot hiking shoes he had thoughtfully lent me. For the kilometers before Urriellu, he also lent me a trekking pole, which was useful for maintaining balance in areas where the footing was sketchy.

The section with cables was predictably the slowest section. You can watch Marcos climbing a cable at 0:41 in the video below.

Descending the trails past the Torre de los Horcados Rojos was a joy, especially when the trail got less technical. Marcos said we would have to hurry back before a storm came later that evening, so I picked up the pace. We passed a lot of hikers who had hiked in from a hotel farther down. We stopped at the hotel to buy water, go to the bathroom, and take a little break.

As the video above and the photos below show, the views from hiking through the Picos de Europa were spectacular. We also encountered many animals, including mules used to carry supplies, free-range cows, and even mountain goats. There were also many rustic, stone-walled dwellings and caves.

Before we did this hike, we had briefly pondered breaking it up into two days. Yet, we comfortably did it in one. For folks who are in shape and do not get vertigo, it is very doable as a day trip and I’d recommend it.