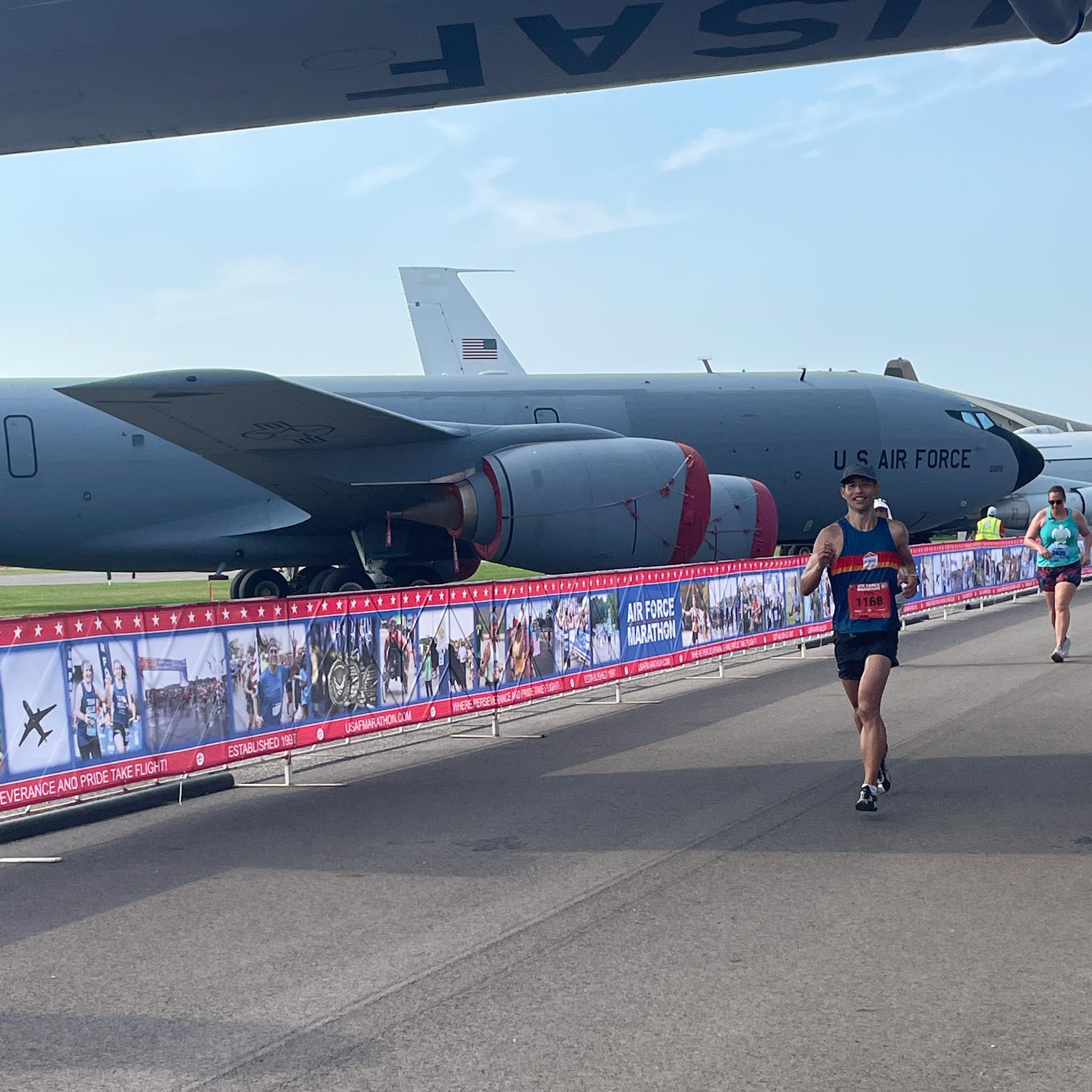 I was excited about doing the Air Force Marathon in Dayton, Ohio for many reasons. It would be my 49th marathon state. The course conditions would be much better–flatter, cooler, and less humid–than in Hawaii a couple of weeks ago, so I was expecting to finish in a much better time.

But the most exciting thing was that my girlfriend Andrea would run the half marathon. It would be her very first race.

She was a late entry for whom I signed up only a week prior. She was waiting for Dave and me to finish our respective races in Kauai when she had a moment of inspiration.

“People were walking,” she explained. “There were people of all ages and abilities.”

American races, she realized, were much different than Spanish ones. In Spain, only serious athletes enter. Most participants are male and even the older participants are fast. When you finish, you are given a bag of fruit and a bottle of water.

So on Saturday the morning of the race, both of us were up at 4:20 a.m. Why so early? We needed time to dress, eat a little, drive to a parking lot at the Air Force Museum, and walk about a mile to the start line. The parking area was a field of long, wet grass, so we wore flip-flops and carried our running shoes in clear plastic bags. We checked in the bags at a Gear Drop area 15 minutes before the 6:30 a.m. start.

The sunrise start typical of US races was something that Andrea was not a fan of. In Spain, races begin at 9 or 10:00 a.m. The early commencement hour and the anxiousness of running 21.1 kilometers for the first time ever made her proclaim that this would be her “first and last” half-marathon ever.

“You’re going to have a lot of fun!” I assured her.

The race begun with military planes flying overhead and fireworks going off. I started running with the 3h40m pace group. But after cresting the Mile 1 hill, I sped up and made a beeline towards a guy carrying a yellow 3h30m sign.

The pacer’s name was Bill. He said this was his 112th marathon and that he had run every marathon in under four hours. A few conversations later, I figured that he was 60 years old despite looking 40.

Running with him were ten other people. Two were running the marathon distance for the first time, including one military dude who said he had “not run in six weeks, but had done a lot of CrossFit.” There was one woman among them, who was very talkative and looked like she was 20 but was in fact 30-35. One man was 55 and had qualified for Boston.

The group stayed together until Mile 15. Then it developed a gap in front of the pacer, something I had not expected nor experienced before. But I trusted the pacer, so I stayed back with him. He seemed to know what he was doing, including running at a steady rhythm and taking the shortest line. The woman, in contrast, ran with a fast shuffle instead of a smooth, classic running gait, and also seemed to be wasting a lot of energy zig-zagging along the course to give cheering spectators high-fives.

At Mile 17, I was the only one running next to the pacer. Mile 18 passed and I noticed we ran a slightly slower mile.

Then at Mile 19, the pacer made a startling admission.

He then offered to give me the 3h30m flag to carry, but I declined. While it could have been a cool story to say that I became the 3h30m pacer partway through a big race, I wasn’t confident about being able to achieve that time. I’ve had so many one-minute misses before that I knew that even though I was still feeling decent, I could easily become undone in the last five or ten kilometers, especially with some hills ahead. I also thought carrying the sign would adversely affect my arm swing and slow me down.

The promised hills at Miles 21, 23, and 24 came and went, which I ran up pretty well but was happy there were no more afterward. My body was tired and I thought about Andrea to keep me going. I caught a few runners, including the CrossFit guy, from the 3h30m group that had left the pacer many miles before.

I was still holding steady in the last mile and could tell from my watch that I was likely going to finish in 3h30m. I could not muster any motivation to make a mad dash for the line to try to finish sub-3h30m.

With 100 meters to go, I commenced a sprint. Fifty meters later, I saw Andrea and I blew her some air kisses.

My final time was 3h30m30s. I finished a minute behind the shuffling, zig-zagging woman. I should not have doubted her. Nevertheless, I was pleased with my race.

The first thing I asked Andrea was how did her half marathon go.

“I started running with a 2h30m group,” she said. “But after a few minutes, the pacer said, ‘One, two, three, walking!’ I thought there was no way I was going to finish in 2h30m walking so soon. So I left the group.”

Andrea ended up running the whole way even though her previous longest run was 13 kilometers, with me in Spain many months ago. She finished the race in 2h12m in the top 20% of all women. Moreover, she affirmed that she did have fun and that perhaps it was premature to proclaim in the hour before the event that this would be her “first and last” half marathon. I’m so proud of her!

Andrea, very impressive! Congratulations to you! Felix, well done on your race too. You both had excellent times. What a fun and memorable race this will be forever for you both!☆☆☆

Thanks Tammi! It was very fun and memorable indeed.

I will always be cheering for you too! Take care in the Fort! ↩ Reply