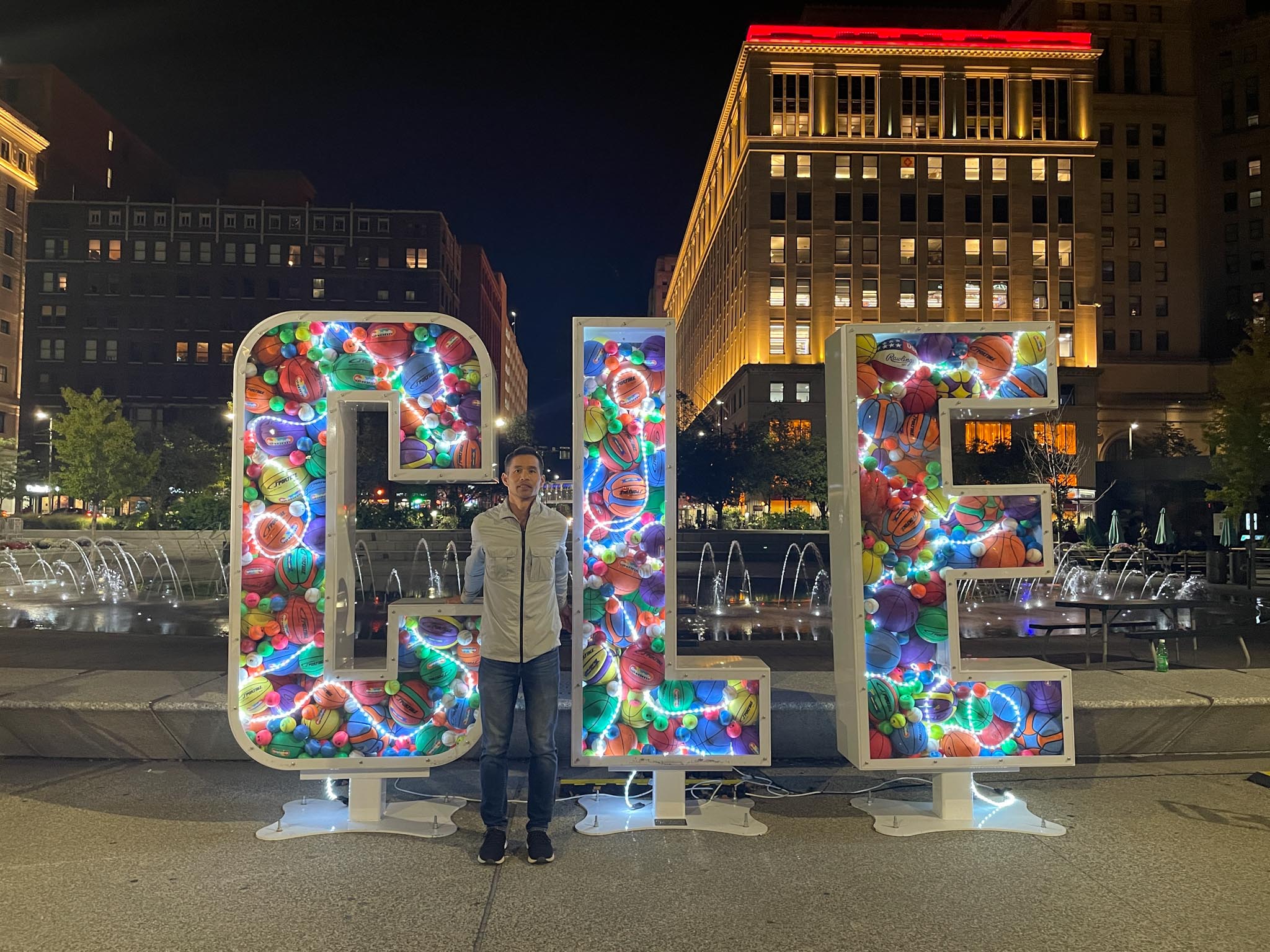 “There won’t be much to see in Ohio,” I told Andrea before the trip. “Therefore, we won’t spend more than three or four days there.”

The first part of my prognostication turned out to be wrong. We ended up having a splendid time in Ohio. There were plenty of pleasant surprises, too!

First up was Cleveland. We flew directly to the airport there from Denver. Inside the terminal was an advertisement proudly proclaiming that Cleveland was home of Duck Tape. I laughed because the Duck brand was one of the worst duct tapes I have used. For one thing, it doesn’t tear cleanly, so you often need to use scissors.

From there, we drove to Edgewater Park. We saw the beach, the sunset, and even the downtown Cityscape from there. When at the park, I learned via Tripadvisor that there was an Instagram-worthy Cleveland sign. So we even took a nice walk through this beautiful park.

Next, we went to Bar 32 to get some drinks. It is on the 32nd floor of the Hilton Cleveland Downtown, and Andrea had read that there were great views of the city from there. What she had read was correct. A one-man band was also covering famous rock songs from the 80s and 90s.

The next day we drove to Dayton, Ohio. On the way, we stopped off in Springfield. Andrea thought that was the town in which the Simpsons supposedly lived.

Whether that is true or not is academic. In any case, it turned out to be true since Springfield had a… Tim Hortons. Yes, the famous Canadian fast food chain. I had no idea Tim Hortons made it to the U.S. So we even got a taste of something Canadian, including tasty Tidbits.

Later that evening, we explored downtown Dayton. As with many American cities, the city center had more office buildings than boutiques and bars, in contrast to Europe. But it was clean, modern, and peaceful, and eventually, we found a pub (the Mudlick Tap House) with food and drink and great service to match.

The next day, I ran the Air Force Marathon, and Andrea ran the half marathon. That was her first race of any distance ever. But that is the topic of another post.

It was one of the best-organized athletic events I had ever participated in. Later that day, we went to the “after party” at the Greene Town Center in nearby Beavercreek, Ohio, which was more like a “lifestyle mall” that had become en vogue in the last couple of decades in America. At night, we went to a couple of bars by our hotel. One was very empty, and college kids packed the other. We talked with two mothers doing a girls’ night out. The four of us were the only ones there not around 20 years old.

The next day we went to a museum that was a tribute to the Wright Brothers and the African-American poet Paul Laurence Dumbar. All of them had lived in Dayton. I also learned that Huffy, the bicycle company (and maker of my second favorite bicycle), was founded there. We had lunch across the street before heading to Orville Wright’s last home, an impressive mansion.

Between those two stops, Andrea had left her purse on the chair outside that she was sitting on! She thought of it only 10 minutes after we had left, and of course I turned the car around right away when she did. Still, she was convinced that the purse would be gone/taken when we came back there. She already started making a list of everything we’d have to do: cancel all her credit cards, file a police report, etc.

“Maybe it will still be there,” I told her. “It would not surprise me if someone had seen it and turned it in. Dayton looks pretty safe.”

When we arrived, the purse was no longer on the back of the chair. So Andrea rushed inside the restaurant, and when I saw her, an employee was asking her what was the brand of the purse. Someone had indeed turned it in.

“This is a good town,” we agreed. Andrea assured me that such a good deed would not have happened in Spain, which has low rates of violent crime but lots of theft.

Later that evening, we went to visit my friends Ben and Tina. Tina was the founder of MiHEC, a non-profit organization that benefits her home country of the Democratic Republic of the Congo that I had served for the last decade or so. She moved to the Toledo area because Ben had gotten a better job there. I asked them how they liked Ohio.

“Sometimes I miss the mountains,” Ben said. “But it is all right!” He also beamed with pride when he told me how his kids responded when he asked them what they thought about the move. They said that “home would be home” no matter the place or however big their house was.

They were plenty happy in their quiet, well-manicured suburb in Ohio. It didn’t matter if there wasn’t so much to see.