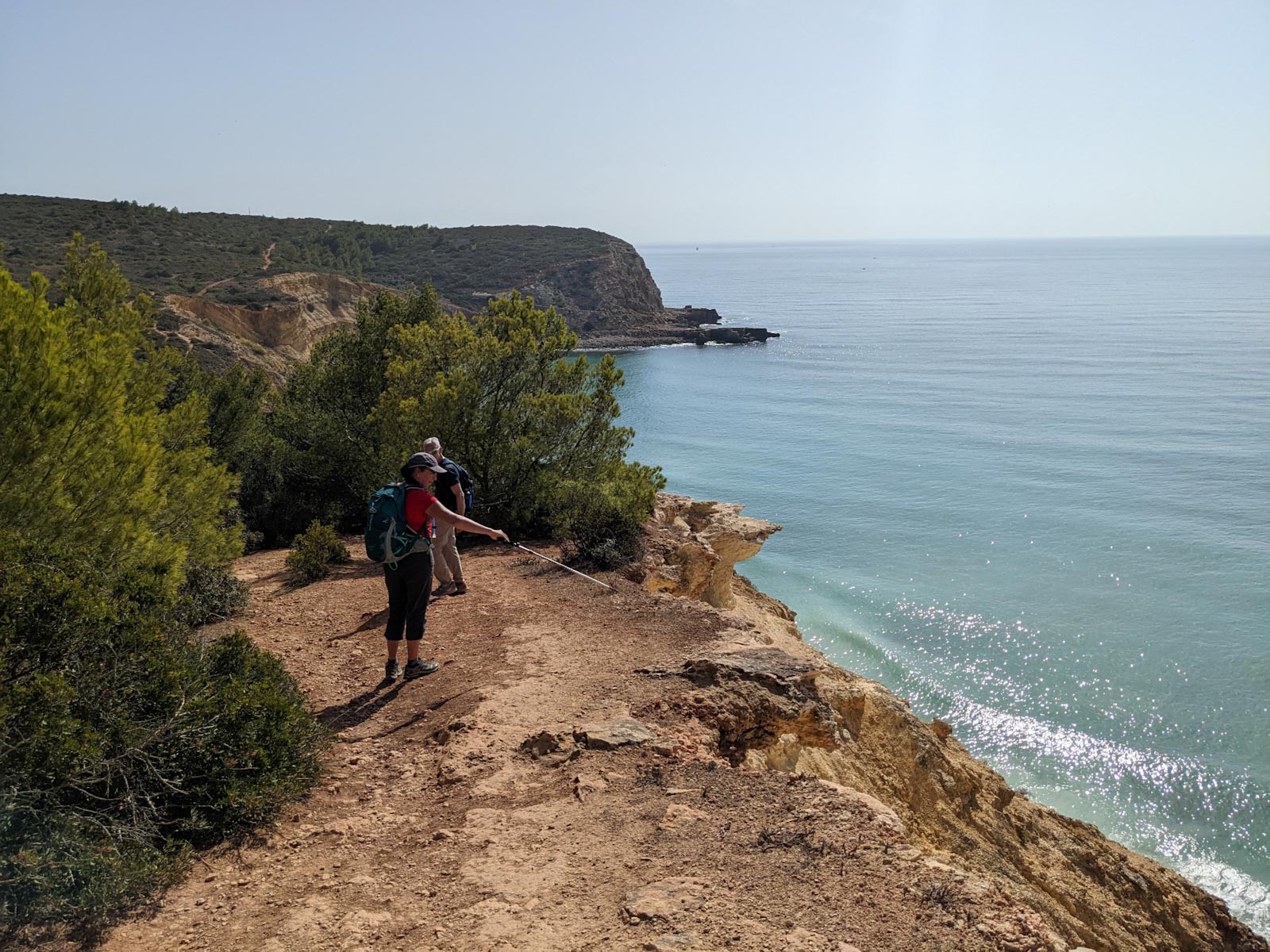 “Finished planning Portugal trip,” wrote my dear friend Tori. “September 24 to October 12. You are welcome to join me at any point. I can send you my itinerary.”

Andrea and I were already planning to travel through the United States during the entire month of September. But we were returning to Spain on October 2, which left open the possibility of joining my friend at the tail end of her trip.

Tori, it turned out, was hiking 225 km of the Rota Vicentina (Fisherman’s Trail) in the Algarve region of southern Portugal with her friend Dave. Having good memories of hiking the last couple of days with Tori on the Camino de Santiago, I was looking forward to joining her on a trail again.

Galicia–the Spanish autonomous community that I live in–and Portugal are on the west side of the Iberian peninsula. So I thought the distance between my town of Pontevedra and the Algarve region was not too far apart.

In fact, I could take mass transit to the Algarve region without hopping on a plane. But it would involve five trains, one bus, some hiking, and around 20 hours of travel time if you include layovers.

I ended up leaving Pontevedra on Friday afternoon. I ate a late but fantastic Indian dinner a couple of blocks from the Porto-Campanha train station. Then I mostly slept on the subsequent trains.

At noon the next day, I was in Lagos. I took a city bus west and walked a couple of miles to Salema after getting off. Then I picked up some groceries for the trek–a bit time-consuming since I had to wait for one of the only two markets to open after traditional siesta time. Finally, I went to look for my friends on the trail.

About half an hour after a leisurely up-and-down stroll through a forest on singletrack by the coast, I spotted a tall, thin, white-haired man ambling up a short climb.

“Felix?” he replied. We had found each other.
Tori arrived another minute later.

It turned out that the hiking they had done that day was the most strenuous leg of the route, with steep hills and sweat-in heat despite moderate temperatures in the high 70s (Fahrenheit). While I missed most of that, I did change into shorts behind a tree only five minutes before encountering Dave.

In contrast, the next couple of days were easy walking. The photos below show the views from the trail. The highlight was watching dolphins jumping in the water near surfers along the beach in Burgau.

A close second was the Indian food we had in Luz for dinner.
We reached the end of the hike in Lagos. My friends finished traversing roughly 140 miles in just over two weeks, including a couple of rest days.

We had our final dinner later that night at a restaurant called Peperino. The instant I sat down, I received a phone notification for a comment from my friend Josh. He later explained that he had opened up the Strava app for the first time in several days and saw that I had just done a hike in Lagos.

“Yo Felix,” he wrote. “I am staying in Lagos for the next couple of days. Hit me up if you want to run.”

I couldn’t believe it. A few days ago, I had not even heard of this town of 31 thousand people. Now yet another friend from Fort Collins was here! What are the odds?

I immediately replied that I’d be leaving Lagos early in the morning but that he should have dinner with us. So an hour-and-a-half later, Josh and his wife Adrienne stopped by.

Josh explained why they were in town. After working for a company in Fort Collins for 20 years, he earned a four-week sabbatical. Adrienne and Josh wanted to go to Portugal, and our friend Ruth (who also lives in Fort Collins but is originally from Manchester, England) recommended the Algarve region. She even had an uncle (I think) who had a home there.

So Josh and Adrienne flew to Portugal, rented a car, and here we all were. Wild.

Initially, I thought I was coming to visit with two friends from Colorado. It was a happy surprise to end up seeing four.