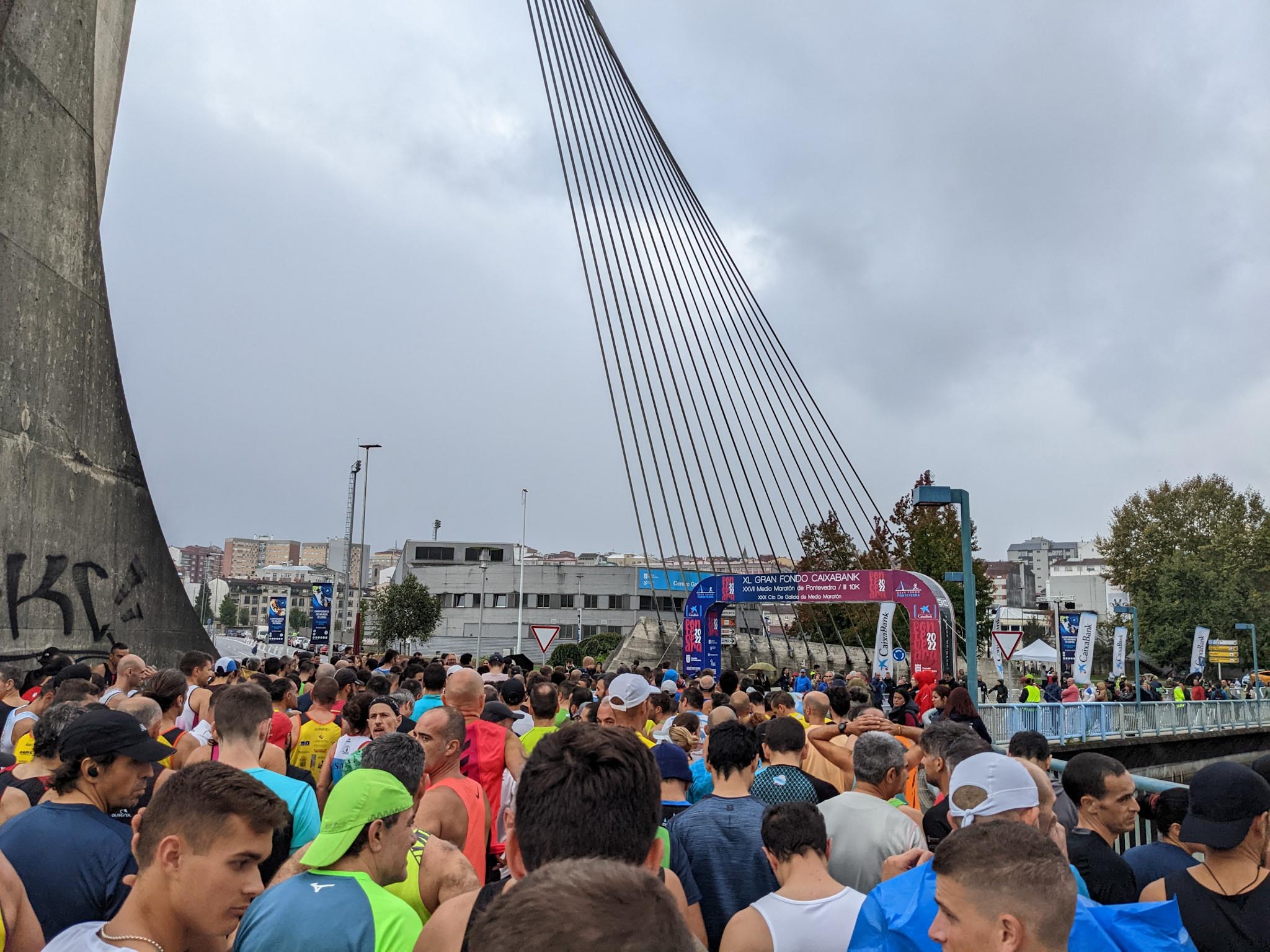 “On October 16,” I wrote my friend Adam in September, “I will use the Kinvara 13 shoes in the Medio Maratón de Pontevedra. I did that race last year in the H. Streets in 1h36m, and I feel like I am in similar shape this year. I’m very much looking forward to seeing what I can do in the Kinvaras.”

I picked up the Saucony Kinvara 13 shoes during the week in September we were in Fort Collins. I chose it because it was the closest “mainstream” shoe to the long-discontinued Puma H. Street that I had used for the majority of marathon states during the last 15 years. Both shoe models are very light and flexible. They also have a low heel-to-toe drop (4 millimeters for the Kinvara and 5 mm for the H. Street).

Between my message to Adam and the Medio Maratón de Pontevedra, I completed the last of the marathon states. I also ran (in the Puma H. Streets) my fastest 26.2-miler since 2014. So maybe I was in slightly better shape than last year.

Pontevedra’s half marathon, then, would be a good indicator of whether the Kinvara 13 was as “fast” of a shoe as the H. Street. At least, if I were to be slower this year than last year, I could say with some confidence that the shoe was worse for my speed.

Here’s how the race went.

It was drizzling much of the morning. At least the wind did not seem overbearing. Because the race commenced at 10:30 a.m. only 200 meters from home, I was able to sleep in and stay warm inside until half an hour before the start.

There were no COVID protocols this year and it was nice to see other people’s faces. I lined up several rows ahead of a 1h40m pacer and set the Garmin’s target time for 1h33m. The Garmin would be my de facto pacer today.

For most of the first half, I was off the pace, but never more than 25 seconds behind. But on after a downhill at Mile 10.5, I was back on target.

The second half went remarkably the same. I also had enough in the tank to slightly pick up the pace the last kilometer, and then sprint the final 300 meters around the track at the Centro Galego de Tecnificación Deportiva.

The final time per the Garmin was 1h34m04s. For some reason, the official results do not have the correct “chip time” for me. They show my “gun time” as the final time.

The Medio Maratón de Pontevedra went very well. I was two minutes faster than last year. However, there were significant differences compared to the 2021 course:

Because the course was 380m shorter, my Strava average pace was only 0:04/mile faster this year. Considering all the other factors, I’d say the Saucony Kinvara 13 and Puma H. Streetwere equal in performance.

But the shoes feel different. The Kinvara has noticeably more cushioning, bounce, and traction. It also might have more stability.

The H. Street is noticeably lighter, even though the difference is only 1.5 ounces. It’s also more flexible.

I suspect the Pumas would have the edge in sprinting and maybe short races. It would be interesting to do a mile test in both.

But I think I’d much prefer the Kinvaras for longer distances because of the softer landings.

I may experiment with modern “super shoes” again (those with a plate that act as a spring), such as the Saucony Endorphin Speed or Endorphin Pro, for speed work and long runs. But in the meantime, I am glad to have a widely available, mainstream model that can fill the shoes of my old H. Streets, so to speak.

The video below summarizes the event, in Spanish. It shows many of the landmarks of Pontevedra and our condo is in the video several times. You can see what conditions were like that day.

At 12:15 into the video, I crossed the finish line for a split second on the right side of the frame.