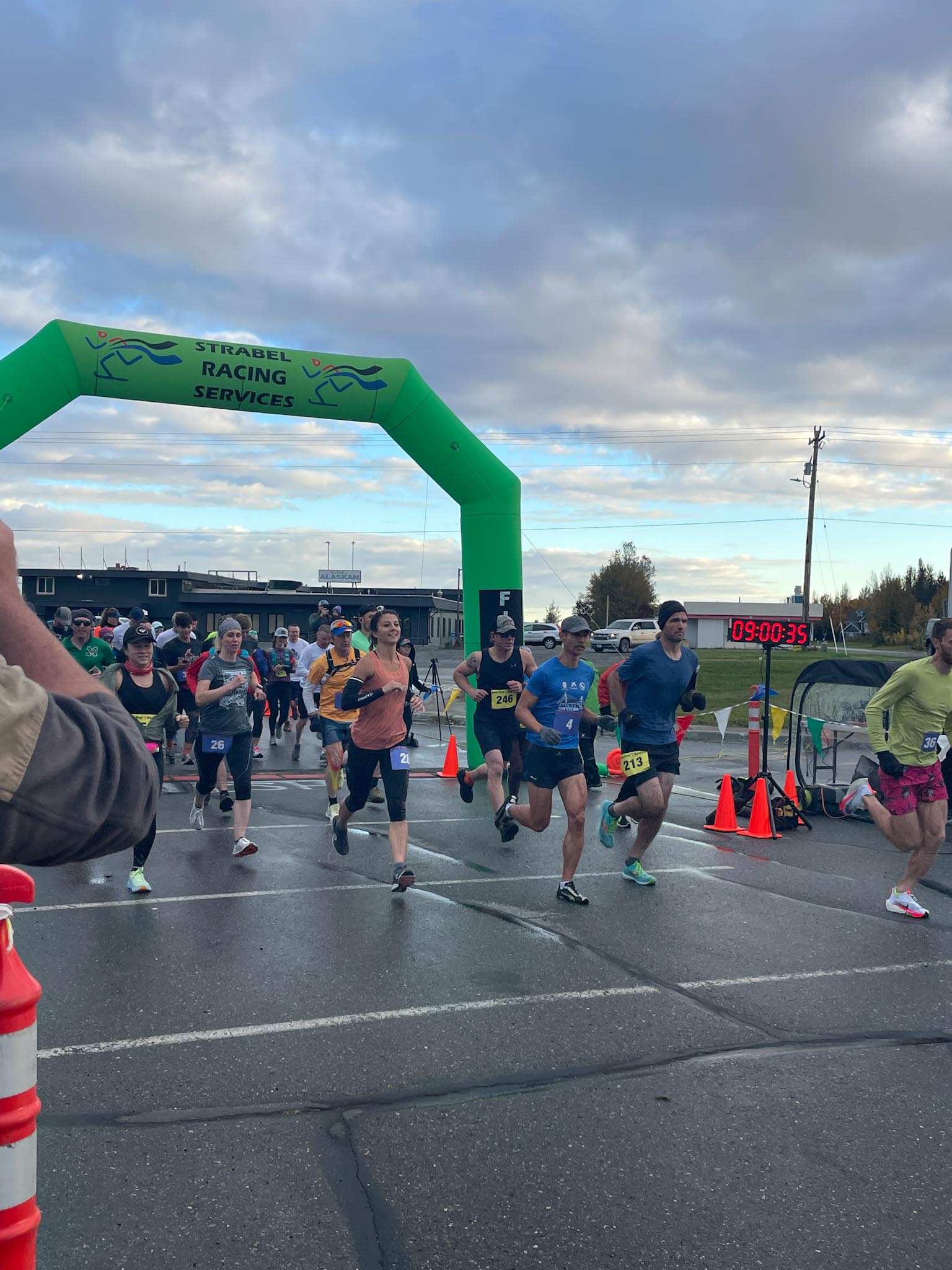 “I think I will be able to put in a special effort in Alaska,” I told my dad a month before the Kenai River Marathon.

Unlike the last dozen 26.2-milers I have done, the race was to be both cool and flat. There also were not going to be any crowds to need to weave around. In other words, this was going to be a classic No Excuses Race.

Accordingly, I set the Garmin’s pacing function for 3h27m0s, or 4:54/km (7:54/mile). The idea was to run even splits slightly faster than that goal pace, allowing an inevitable slowdown at the end.

That strategy went out the window shortly after the organizer shouted “one, two, three” and clapped together two wooden fish to start the race.

Within thirty seconds, a tall man sprinted wildly ahead like he was being chased by an angry Alaskan moose. I barely got a glimpse of him; within a kilometer, he was out of sight. Was he doing the half or full marathon? I could only hope it was the former.

Meanwhile, I settled in immediately behind two women. Due to their brisk pace, I suspected one of them might be the female racer who won the race outright last year in a sub-three-hour time. But after two miles, it became clear that both of them were already breathing harder than I was, so I passed. I glanced over and noted their bib colors (blue) to confirm that they were indeed running the full marathon.

After that, I never saw another runner in front of me again except for a speedy relay runner at about 19 miles. And when I dared look back at Mile 7, I couldn’t see anyone behind me either. The race had become a solo time trial.

At least the course was well-marked with frequent orange cones. My only nitpick was that the printed arrowheads on them were small. I couldn’t tell if a horizontal arrow was pointing left or right from more than five meters away. So occasionally, I missed taking the shortest distance around a bend because I could not see far enough in advance of which direction I needed to turn.

Otherwise, being all alone kept me focused. I concentrated on running with a slight forward lean from the ankles, inhaling from the nose and exhaling from the mouth every three steps, and keeping a cadence of at least 180 while staying relaxed. Moreover, I thought of Formula 1 and hitting all the tangents. Only the grab, pinch, pour, and toss Gatorade-filled-cup routine every few miles interrupted my rhythm.

The Garmin ticked off 4:27 every kilometer, which was way faster than I had initially planned to go. After 13.1 miles, the watch read 1h34m30s which was faster than any half-marathon-only race I had done since 2009, including last year’s Medio Maratón de Pontevedra.

Of course, I was unable to maintain the pace. The slowdown began at roughly Mile 15. My hamstrings were more tired than usual from all the pulling they were doing at the faster pace. The good thing is that the quadriceps and calves were less tired. I’d need them for the short, infrequent, but unappreciated uphills that appeared in ensuing miles.

I got to Mile 20 still feeling pretty decent but felt increasingly taxed during the last 10 km. With eight kilometers remaining, I thought about running that distance with Andrea in Huntington Beach a week ago. With five kilometers, I imagined our frequent runs in the park by the Ría Lérez across the road from where we live in Pontevedra, Spain.

Each kilometer couldn’t come quickly enough and, in fact, took roughly five-and-a-half minutes. The sight of a Walmart and then a Home Depot on the main street through the City of Kenai only brought slight relief that the race was going to be over soon.

Before most marathon races, I imagine doing a heroic speedup with one or two kilometers to go and a wild sprint at 400 meters. In this case, I could do neither and was barely hanging in there to Not Slow Down any further.

It was not until I made one last turn into the 50-meter finishing chute that I was able to pick up the pace.

“It’s Felix Wong from Fort Collins, Colorado,” boomed the race announcer. Shortly after that, Andrea came running out from the Kenai Visitor Center, where she was sheltering. Before the race, I told her I would finish between 3h25m00s and four hours “if I have a bad day.” Furthermore, I said I was predicting 3h27m, so she wasn’t expecting me to come in for a while longer.

The only question was whether I was first or second. As it turned out, the runner who was off the front thirty seconds into the race was indeed running the full marathon. He was Lars Arneson, an elite ultrarunner who was the guest speaker the evening before the race. We missed his presentation due to doing a four-hour afternoon cruise of the Alaskan Fjords in Resurrection Bay. He was a well-deserving winner, and I was more than content with a second-place overall finish.

I was thoroughly spent; Andrea even asked me if I was ok despite giving her multiple kisses and beaming an I-can’t-help-it smile.

“Yes, I’ve felt worse,” I managed to say between breaths. “If I weren’t super exhausted, then I didn’t try hard enough.”

In the next 15 minutes, I ate a hot dog and a whole bag of Volcano Chips. The hot dog was “the best hot dog I’ve ever tasted,” which I don’t think was because I had just burned 1700 calories in the last few hours.

I also guzzled a can of Coke, then a Pepsi, and then a Mountain Dew, despite my pledge to avoid cola since getting my first (and hopefully last) kidney stone a few months ago. I needed a quick energy boost and lots of caffeine for a long drive ahead. Moreover, special days warranted dietary exceptions.

This was indeed a special day. In addition to the fast (for me) time and the overall placing, I had completed my 50th marathon state. That was a lifetime goal that took 23 years.

There was another life event that occurred later that day. But that is a story for another post!

In both of the articles below, I got a brief mention. But they were both in the context of how badly I was beaten!

Congratulations on completing your goal and what a race Felix~ well done, well done indeed!☆☆☆

Super race and special moments forever for you both! Your thoughts of Andrea the whole time were quite motivational. Your heart is happy ~ really nice to see! ↩ Reply