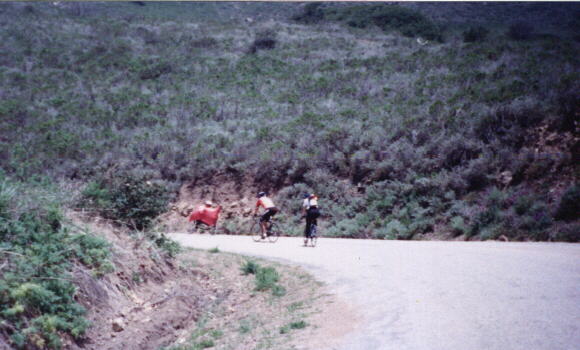 The Central Coast Double was my third double century of 1999. Being the second—and least “extremely difficult”—ride of the California Triple Crown Stage Race, I felt it would be the best indicator of whether I’d be able to finish the Terrible Two later in the year under its 16.5 hour time limit. If I could do this ride in 16.5 hours, I thought, I just might have a chance in that sufferfest.

The night before, my friend Dave and I headed down south together. He was going to be biking in Morro Bay while I rode the double.

The new equipment I used for this ride included Diadora Trivex cycling shoes—my first new pair of cycling shoes since I got a slightly too large pair of Performance-branded ones in 1994. Yep, I had been wearing somewhat ill-fitting shoes for 5 years. The Diadoras proved to be airy, stiff, light, snug-fitting, and comfortable. I can’t quantify how much faster—if at all—they made me, but at least I am running out of excuses for poor performances.

Riding from the hotel Dave and I were staying in to the start of the ride, I checked in way before the mass start of 5:00 a.m. and munched on a doughnut provided at the start. After completing the Devil Mountain Double, I had few misgivings for this ride except for a strictly enforced time limit: riders had to be at the Mile 178 rest stop by 9:30 p.m., or 16.5 hours into the ride. If my time splits would mimic that of the Devil Mountain Double, I would barely make it .

I decided to take it slow and easy at the beginning as I had not ridden much in the two weeks prior to the ride while a friend was visiting from Florida. Consequently, I was dropped by the majority of the riders at the start. I later made up some time on the climbs.

The ride began with some of the most spectacular scenery in CA. Lush, green, tree-lined hillsides led to the Pacific Coast and then to the halfway mark of the ride. I got into a meditative zone, not very aware of what was going on. Time flew by while I felt very much at peace.

Reality hit at a rest stop around Mile 87 when I overheard the volunteers discussing how many more people would be coming into the rest stop after I. “There’s only seven more people on the course as two people dropped out already,” they said. I was surprised—there were more than 100 riders on this ride, and I was at the tail end of them. I really didn’t think I was going that slow.

But as I was still on pace for making the Mile 178 rest stop on time, I wasn’t too concerned. And after the rest stop, there were significant climbs in which I began to catch, and even drop, other cyclists. I was feeling good while enjoying the view of the waves of the Pacific. The effective pacing early on had paid dividends like they had on the Devil Mountain Double.

The second half was the real test. At approximately Mile 110 came a climb in which I had no idea how long it would be, but it looked plenty steep. But I was feeling good due to early energy conservation and was passing a lot of cyclists despite the heat starting to scorch us. The climb seemed to last forever. After an hour passed, I wondered when we’d finally be descending. Finally, the top was in sight.

Then came a nice long descent. I wasn’t exactly wasted after the effort, but was definitely sleepy—and several of the riders who I had passed on the hill caught up on the descent while I was dozing off. Memories of falling asleep during the 1997 Davis Double came to mind, but I hung in there.

From that climb to Mile 150 was a strong headwind. The ensuing miles until Mile 180 were a blur and as I write this (in June 1999) I don’t remember much of it. I do remember thinking that I was making good enough time to definitely finish by the Mile 178 time deadline, and even finishing in 16 hours was within reach. All I had to do was ride the last 30 miles in two hours, which I could have easily done especially with an awesome tailwind we had on the way back, except for a certain problem explained in the e-mail I wrote to a friend, below.

I could have likely finished in under 16 hours were it not for my lights. All I had to do was ride the last 30 miles in two hours, which I could have easily done, especially since we had this an tailwind, but then it got dark. Now, usually this wouldn’t have been a major issue (I’ve done many rides at night), but 1) the roads were unlighted in Boonieland, 2) the moon was not out, 3) there were no reflectors on the road, 4) there were no stripes on the road, and 5) I rode alone and hence could not take advantage of other riders’ higher-powered lights.

So, I had to rely on my $15 two-watt headlamp (compared to the other riders’ $150 20-watt lights), which was totally inadequate. I could hardly see a thing and, to add insult to injury, the batteries went dead and it took over 10 minutes to swap in four new ones in pitch blackness. They went dead again in 30 minutes.

So I rode Miles 200-207 in absolute darkness, and was practically braking the entire way, until I was “rescued” by some other riders with functional lights who caught up to me. A little too late to salvage any of the lost time, but oh well. I have now resolved to invest in some decent lights.

That’s how the ride ended. Looking back at the ride, it gave me a confidence boost that I could ride the Terrible Two Double Century within the allotted time limit, if just barely so, as I finished this longer ride (208 miles vs. 206 for the Terrible Two) in not much over 16.5 hours while feeling very fresh at the end due to going so slowly for the last 30 miles while not being able to see.