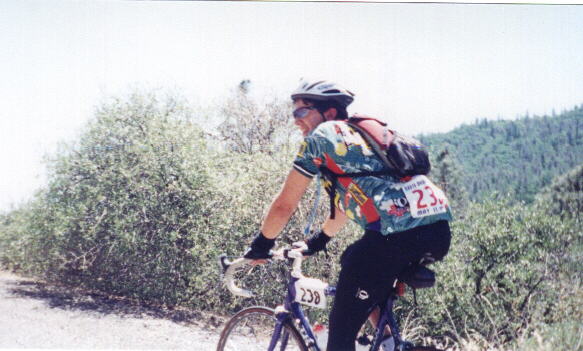 “What have I gotten myself into?” wrote my friend and aspiring triathlete Dan, who had earlier this year committed to riding his first double century in Davis. Quite frankly, I had complete confidence in Dan, whom I seen make remarkable progress early in the cycling season, especially after riding numerous centuries on consecutive weeks. Yet he expressed nervousness a week before the ride over this “crazy” idea. After all, this is 200 miles, the distance from, say, Palo Alto to San Luis Obispo.

Having riding ten doubles in the last few years, including Davis three times already, I tried to convince him that when you’re in as good shape as he is, it’s mostly a mental game. I was mainly concerned about the weather. Davis weather has always been nasty for me, ranging from the shivering rain in the 1998 Davis Double and the spring 1999 200km Davis Brevet to the record heat of the 1997 edition of this ride. Earlier in the week, the weather forecasters were predicting showers.

Thankfully, however, upon arrival in Davis the evening before, no clouds were evident anywhere and the weather forecast had improved. And as with my last few rides in Davis, I got a good night’s sleep at a friend’s place (thanks Pin-pin!), after a great dinner with my old high school friends.

Dan and I met at the start and were rolling on bicycles by 5:40 a.m. The air was crisp and cool and the sun was peeping out enough over the horizon that lights were unneeded.

Dan made a comment about “taking it easy” in the early part of the ride because “we are going to ride 200 miles!” That was totally okay with me. I had no thoughts of going for a personal record; the main goal for the ride was to help Dan get to the finish while having fun together.

It didn’t take long for us to discard the “taking it easy” plan. After some conversations with other cyclists and 10 miles, we joined a long paceline going at a decent clip. Then we could no longer converse due to the wind howling in our ears.

The pace of the group increased further. At Mile 20 the paceline whittled down to only 7 or 8 riders, and I lost track of Dan. I knew he couldn’t be far behind and I’d see him at the first rest stop, so I kept the hammer down until the first rest stop.

There I checked the average speed on my cycle computer: 19 mph. Not bad at all.

At the rest stop, I filled up the water bottles and only had to wait a few minutes before I see Dan. He seemed to be in good shape despite the quick pace of the first 26 miles, but he didn’t notice me at all despite my snapping a picture of him 10 feet in front of his face. After he saw me, we didn’t linger at the checkpoint long. One strategy we would employed for almost the entire ride was spending minimal time at the rest stops.

As we would be approaching the hills shortly, including the famed-but-overrated “Cardiac Hill”, we agreed to “take it easy” again. But once again, we got swept up by another paceline. We traded pulls until getting to the hills, when the paceline got strung out. “Well it was nice riding with ya,” said one of the riders in this paceline who was no longer keeping pace.

But I was still feeling strong and evidently, so was Dan who was not far behind at all. I stopped at Rest Stop #2 at the Monticello Dam to join the long line for the Port-O-Jets, and less than a minute later, I heard Dan yell while still powering up the hill. “I’m going to skip this rest stop, but I’ll see you later!”

Seeing him go, I really wanted to take off too, but I really also needed to take a leak.

When I left the rest stop I checked the time since I last saw Dan. It was five minutes. I guessed that Dan was 1.3 miles ahead already. I thought of back to the 1997 Foxy Fall Classic (also in Davis), when it took me over 40 minutes to make up that amount of time on my cycling partner Ken. So I decide to put on the hammer.

I was feeling strong—clearly, the more-than-usual training early in the season and having done already done three doubles this year had helped my conditioning. I passed ten riders, then twenty… maybe even thirty or forty? On the long sweeping downhills, I made up even more time.

Finally, I saw the red and white Stanford windbreaker that Dan was wearing. “I knew you’d catch up on the downhills,” Dan said.

There were only a series of small rolling hills to the next rest stop, so we got there in little time. “We’ve done 60 miles already and it’s not even 9:00,” we realized. We are blazing right along.

During these miles the terrain was similar to what we have done before–no major hills with a series of rollers–and our pace was still very decent. We were in such a zone that we even skipped the Pope Valley Grange Hall Stop at Mile 75. I’m not even sure of what I was thinking about during all of those miles, if I was thinking about anything at all. One thing that always happens to me during these ultramarathon rides is becoming “meditative”, where the mind is at total ease, not really thinking about anything, just watching the surroundings rush on by. It’s during these moments that I am most relaxed and the time goes by most quickly.

Before we knew it, we were at Middletown High School which was the rest stop at Mile 95. I recalled that in the 1997 Davis Double, the day was already very hot and the Davis Bike Club thoughtfully set up “mist showers” to help people cool off. Not this year. The weather was absolutely beautiful. It was a welcome change from years past.

I also recalled the next 10 miles would be the hardest and the steepest. The subsequent 30 miles would be no joke either. Up to this point, the ride had been smooth sailing. But how would we fare now?

After my “warnings,” Dan and I agreed to take it easy yet again. But it was the next few miles where Dan started to show his strength. I think he got a boost in confidence that he was feeling so good with half of the ride behind him.

“Okay, here’s the start of the climbing,” I shouted. Nothing was really steep yet, but it was a steady, long ascent. We caught and dropped many cyclists and Dan said he was still feeling good. I was okay with the pace, but had some misgivings about the relatively steep climb up Big Canyon ahead.

When we got to the base of Big Canyon, there was a water stop. Some riders were there taking a break.

We continued on. The grades leading to the top of the ride was not trivial. But Dan was hardly even breathing as we blazed by some more riders.

Not too long after, we were descending. “That wasn’t so bad,” Dan said.

We coasted the downhill all the way to lunch. But I was surprised at how fast and easy that climbed. Up to that point, making it up to highest point of the ride was the highlight—but pleasantly, even better things were yet to come.

We spent 40 minutes at lunch and were ready to hammer afterwards. Next up were a series of moderately steep, long climbs dubbed “The Resurrection.” For a novice double-century rider having 120 miles under his belt, I imagined the Resurrection could be daunting. Yet, Dan looked absolutely unperturbed and completely confident. It was during those miles that I realized just what a great rider he is.

“I’ve never felt so alive in my life!” Dan said to another rider. I later summed up how Dan looked in the following email:

Let it be known that this was Dan’s first double century (he is an experienced century rider and aspiring triathlete), and yet he was absolutely phenomenal. The most memorable experience for me was The Resurrection, the name given to one of the more challenging 2500-foot climbs that came after 130 miles. Here we were just blazing up this mountain, dropping scores of riders who were straining, grimacing, and panting. Heck, I was rather quiet myself, as Dan and I were climbing this mountain fast, and I can’t talk and do anything else effectively at the same time. Yet, here Dan was actually singing (and very loudly and even quite harmoniously might I add) all the way up this hill.

Imagine this scene and the look on the faces of 50 or so highly trained cyclists totally struggling up this hill, and then us just whizzing past them while Dan the Tri-Guy is singing “America the Beautiful”. It was awesome.

It was an experience I won’t forget soon. Here is a pic of Dan and I taken right after we conquered The Resurrection.

After the Resurrection was a long, rewarding downhill. Now entirely confident Dan cold keep up with whatever pace I go, I got into an aero tuck, shifted into the big ring, and lead us downhill. My cyclometer registered speeds in the high 20s and mid-30’s, and felt like we were doing a near time-trial effort.

We continued at those speeds for the next 20 miles, where there is a paucity of riders compared to the first 75 miles of the double century. Whatever riders we saw, we quickly passed.

But when the road leveled out fatigue started to set in. Dan might have a little tired too because he was reluctant to trade pulls anymore. Fortunately, however, a few miles earlier three riders latched onto our formerly two-person paceline. Seeing that I was tiring, they took a few turns at the front so that our pace wouldn’t drop too much.

With our five-man train, we even decided to pass up Rest Stop #9 at Mile 165, even though both Dan and I were only pulling for less than 30 seconds at a time. Perhaps from Miles 135-165 we had set a pace that was a tad too fast.

At this point, finishing was long a foregone conclusion and we spent more time than usual—about 10 minutes—at this rest stop. Dan also needed to pick up his lights here, not that he’d need to use it. It was only 5:00 p.m. so the sun would be up for another three hours.

When we got going again, we joined yet another paceline. We meandered through the yellow farmlands of the area west of Davis, with the only real excitement occurring when, on a left hand turn in which half of us had to stop, our paceline got split into two distinct groups. Not wanting to lose the first group, I got into an aero tuck to pull our train, and we caught them them after a couple. It was the last Herculean effort for the day.

When the businesses and residences of Davis were in plain view, we relaxed the pace. A few miles later we rolled into Davis High School on Oak Street, the end of the ride.

It was only then that fully comprehended what we had accomplished.

“Dan”, I yelled out while looking at the time on my watch. “Twelve fifty-seven. We finished just under 13 hours.”

We were ecstatic. Before the ride, the main goals included Dan finishing his first double century ever, and just having a fun time. But not only did we finish under 14 hours—something I have never done—but under 13. There was a tremendous sense of satisfaction for both of us. We did it!