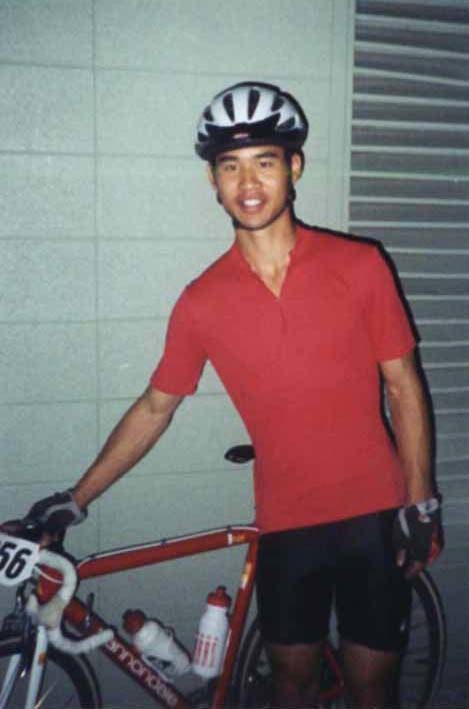 I thought it was going to be easier—one of the easiest of the California Triple Crown events. I had already done the Davis Double Century last year, and completed the grueling Death Valley Double just a month and a half before. This year I had upgraded my wheels and gearing, and the weather forecast called for sunny skies, unlike last year.

“I’m going for a personal record,” I told my friends.

It should have been an ominous sign that during the three-hour gridlocked drive the day before, I was sweating all the way to Davis. Goldie, the 1969 MGB, was getting pretty close to overheating at times and so was I. But more on the mind was arriving in Davis on time to meet a couple of friends I have not seen in ages.

It is good to see Ken and Pin-pin. We went to Baker’s Square for dinner and talked for 3.5 hours. Then we hung out at Pin-pin’s place for a few hours more.

It got really late and my friends wondered if I’d be able to stay awake during the ride. I was very sleepy but stated it is impossible to fall asleep on a bicycle, pedaling at 90 rpm and heart rate at >150 bpm. I cited past rides I without getting much sleep the night before, and nearly convinced myself that sleep deprivation won’t be a problem.

In fact, back at Ken’s place, I stayed up even later to replace Canny’s old 7-speed RX100 rear derailleur with a new 8-speed 105SC one that I just received in the mail earlier in the day. Setup was pretty simple, and shifting was much better.

But I got no sleep whatsoever before departing Ken’s for Oak High School, the start of the ride, at 4:00 a.m. It was still warm outside, even at this time of night.

At 5:20 a.m. I was ready to roll. The air was cool, not cold, and the sun was ready to snap out of its long night’s rest. Remembering that last year I did not have to use my headlamp, I left it in the car.

The winds seemed tame and I was feeling okay. The first (and last) 30 miles of the Davis Double is mostly farmland with nothing really memorable or noteworthy. Relaxing for sure.

It was perhaps too relaxing and I found out that it is possible to fall asleep on the bike. I was constantly, especially during miles 40-70, and ended up taking three 20-minute naps during the day. It is not a good feeling to fall asleep on the road, only to be woken up by a speeding car or a rider who suddenly shouts, “on your left.”

But sleep deprivation was not the worst of my problems. As noon approached, the sun was in full fury and the temperatures reached near-record levels of over 100F.

Moreover, I was totally struggling going up hills I didn’t even notice last year. I keep on thinking, “They must have changed the route for this year,” but others assure me that they didn’t. What a humbling experience.

I was feeling pretty miserable and persisted. Finally, after hours of low energy, a thirsty mouth, and feeling, quite frankly, brain-dead, things got better after 160 miles. Temps got back to normal, the terrain was flat, and I was feeling strong again.

I also encountered a Palo Alto native named Jim Michaels and we rode together with some others until the end. It was good riding with Jim.

We did the last 22 miles in just one hour, but I still only got back to the car a 10:10 p.m. This was the worst I felt during a triple-digit ride up to this point.