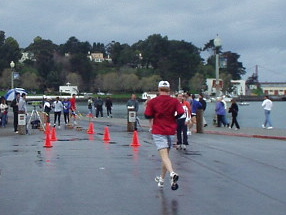 The rain of the previous night had paused and there were near-perfect running conditions for Bob Borck and I in the Waterfront 10-mile Run in San Francisco. This is another great run hosted by the Dolphin South End Runners—their events tend to be inexpensive low-key races in picturesque areas in the City and are quickly becoming my favorites.

Bob picked me up at 6:30 and we got to the start with plenty of time to register and hang around before the 8:00 start. There were probably about 100 runners with noticeably more younger runners this time than last month’s Windmill Run (the last DSE run I did). The course was out-and-back along the Embarcardero, past Fisherman’s Wharf and SBC Park (formerly Pac Bell Park), and had splendid views of the bay, the Bay Bridge, and even the Golden Gate Bridge (at the beginning and end).

I started out in 6th place and was even in 5th place for a couple of miles with a nice view of the front, but of course others would pass me (at least until Mile 6). The wind was at our face going out, and there was a not-very-steep hill near the turnaround point, all of which meant that coming back we would have a downhill and a tailwind!

I really enjoyed the last half. The reason for this is at Mile 6, the first-place female—a particularly pretty woman—caught up to me. Since she had made up some good time after being about 30 seconds back at the halfway point, I was expecting her to pull away at some point, but I was determined not to fade and make her earn it if she was to beat me. As it was, we ran side-by-side all the way to Mile 9.75, after which I picked it up, pulled away, and had enough to sprint in and finish about 9 seconds ahead. After she came in we smiled, gave each other high-fives and I said to her, “you kept me going” and she replied, “I was like, man, he’s not letting up!”

My final time was 1:13:44, or 7:22/mile pace—good for 12th place. While that was slower than I had hoped, I was happy with the way I ran as I did not fade and felt comfortable yet still trying hard. I wasn’t sure how well I would run as during a couple of short training runs earlier in the week I felt very tired, as if my legs had not fully recovered from the Butterfield Double (even though they were never sore). Here are my time splits:

Bob had a great race too and was happy with his time.