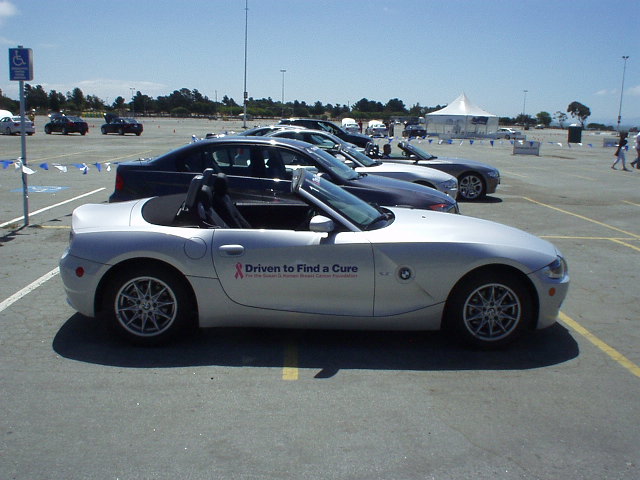 For the last few years, BMW has been hosting their Ultimate Drive event to benefit the Susan G. Komen Breast Cancer Foundation. The deal is to come in for a test drive, and for every mile that you drive BMW will donate $1 towards breast cancer. Seemed like a great deal to me. Besides, I got invited this year, presumably due to previously being the owner of a new 2000 Z3 for a few years.

The Ultimate Drive was held at Monster Park (originally Candlestick Park, then 3Com Park)—or at least that is where registration and the start/end point was. You signed in at a makeshift BMW tent—which had a 3- and 5-series sedan on display, along with a couple of couches and plates of fruit and hors d’oeuvres—and waited until your name was called. Then, you were handed a 7-mile route sheet going through the streets of South San Francisco, which included 0 highway miles. I had an appointment 11:00 a.m. for a Z4 and one at 12:00 for a 3-Series sedan, but as it turned out 3-Series sedan was available for me at 11:45.

To my utter dismay, the vehicle—like all of the others—was not equipped with a manual transmission. The car did, however, have BMW’s “manumatic” transmission, which is basically an automatic transmission that you can shift manually by tapping the lever up or down. While better than a transmission that was strictly automatic, the tranny left me wanting. The actual upshifts and downshifts lagged the nudge of the lever by a significant fraction of a second, and the transmission would sometimes still have a mind of its own and do something I did not want it to do. Now, its taking over control is fine in the case of self-preservation, as in the case of potentially over-revving the engine by downshifting when the revs are already near the redline. However, this particular slushbox would automatically downshift sometimes when it felt that too much throttle was being applied In other words, there were scenarios when I felt an automatic downshift was unnecessary, yet it believed its advanced algorithms were more intelligent than the human. In any case, certainly caught me by surprise.

Now, the drive. Most recent articles had lauded the Z4’s new suspension, saying that it was a “great improvement” over the Z3’s. (Never mind that those same publications had heaped accolades on the Z3’s just a few years ago.) Now, how a “great improvement” manifests itself over an already excellent suspension setup is beyond me, and after the test drive, I was still left wondering. Maybe it would be best felt at the limits, either on a race track, or, say, really irregular surfaces where “superior” suspension might make a difference? In any case, try as I might, I could discern no perceptible difference between the Z4’s steering or suspension and the Z3’s. If anything, the Z4’s was a little harsher.

Regarding the engine, the Z4 supposedly was capable of putting out 13 more horsepower out of the same engine as my old Z3, and hence should should have been faster. Of course, with this “manumatic” transmission, I could not make a fair comparison—my Z3 with a stick felt more direct and responsive, as I’m sure a Z4 would with a proper transmission. However, according to BMW’s own promotional material, the Z4 takes 7.1 seconds to go from 0-60 mph, whereas the Z3 required only 6.9 seconds.

Finally, to wrap up the impressions of the car, I must talk about the styling of the Z4. While it looks all right from some angles, most notably from the rear or rear three-quarters with the top down, it still has not grown on me. Top up, the car looks at best awkward and at worst atrociously cartoonish.

For sure, it is not nearly as beautiful as a Z3. Even today, when I see a Z3, I look and think “what a great-looking car,” whereas the Z4’s aesthetics are interesting, but not gorgeous. According to BMW, the Z4’s shape is the result of “twisting planes” and is “a dance between light and shadow”. Now if only Chris Bangle’s styling artists could create a shape as well as BMW’s marketers can write!

The same applies to the interior: whereas the Z3’s was classic, evoking the chrome-faced gauge-laden dashes or many older British sports cars, the Z4’s tries hard to look stark and avant-garde. By having “knee-airbags,” the need for knee bolsters is eliminated and results in a thinner-looking, more minimalistic dash. But the interior looks a little too plain to me.

I drove this sedan to see if a sporty sedan could ever tug at my emotional strings the way a roadster can.

It had the same engine as the Z4, but for some reason the 3-series I drove seemed more powerful than the Z4. Maybe I got that sensation from being able to hear the engine rev better in the sedan (I drove the Z4 with the top down, of course). Otherwise, even with the sunroof fully open and handling that was as good as just about any sports car, the quick and short answer was: no. At least not as a replacement for a sports car—I will always have to have at least one two-seat convertible in my stable.

While it was fun to be able to test-drive BMW’s latest offerings and truly appreciate them inviting me to try them out (and especially applaud them for contributing to breast cancer research funds), I came away thinking if I ever had to choose between a Z3 and a Z4, I would choose the Z3 in a heartbeat. Z3s are also a lot more affordable since there is a large used market for them now.

That said, I don’t have to choose between a Z3 and a Z4, as a couple of years ago I already replaced my Z3 with another convertible I love—my ’91 Alfa Romeo Spider. While the Spider cannot match either of those in terms of raw handling or speed, the Spider has about twice as much cargo room as either of them and gets as much as 35 miles per gallon, all while providing a very satisfying motoring experience. It doesn’t depreciate, and eludes a certain Italian charm that neither of the Bavarians have (in contrast, the Bimmers scream yuppie). Furthermore, I greatly prefer my Spider’s styling over the Z4. Like the Z3, the Spider’s styling is simply classic and timeless, rich with heritage and low on gimmick.