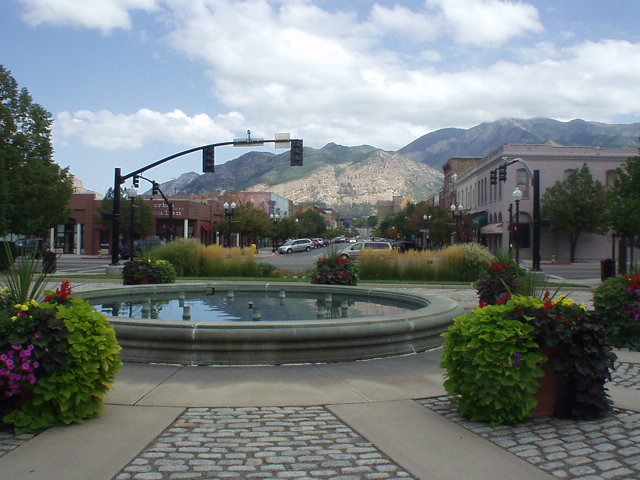 I hadn’t given any thought about visiting Ogden until I met a climber chick named Jennie at the City of Rocks on top of a rock I had just climbed. She told me how much she liked Ogden, which made me resolve that I’d have to at least drive through the town which had hosted many of the events in the 2002 Winter Olympics. When I arrived in town, I was pleasantly surprised by what I saw.

First off, unlike most of southeastern Idaho, there were trees on the mountains and the land did not look a sickly yellow or brown. In fact, from downtown, the views of these mountains were just awe-inspiring.

Downtown—both clean and colorful—also was very pleasant, with shops with lots of character and an abundance of restaurants. I was here on a Sunday, however, so downtown was very quiet.

Weber State is closer to the hills, where there are also a number of newish, attractive homes with views of the stunning mountains. I was stunned to see that homes of my liking (three bedrooms, two-car garage, nice neighborhood, mountain views) were going for $210,000.

Recreation is also supposed to be very good. Skiing opportunities are definitely world-class, which is why there were several events in the 2002 Winter Olympics that were held here.

I left the city feeling that this was a viable place to live, if I could reconcile myself with the abundance of snow in town during the winter and the reputedly conservative Mormon population (something between 40-60% of the city?) Ogden was one of the great surprises of my Great American Road Trip.

You are a wonderful person! I love this clear, objective, impressively detailed work/labor of love you do. You say the things I care about- like morbidly obese people, and the disappointing browns of the hills, etc. I lived in Logan in the winter one year, and it was pretty, but when the snow left- ick! The bare hills are not what I expected for a mountain town. Were there ever trees there? And, how can people live in Pocatello? Ohh...

I just moved from Colorado Springs, back to Wisconsin. C.S. is a big city, high crime, huge population increases; I hope to see an article about C.S. sometime. P.S.- they hate Boulderites! Trucks with US flags...

I do like Ft. Collins, and can se why you live there. I was considering it, but the university indoor track is off limits to the community. Nice country around there, the farms are great.

I am actually traveling to Ogden in April, and may move there. Thanks so much for the good info. The trails in the hills look great there, and it has 3 university tracks! Priorities, you know?

Anyway, you do a truly fine job at this, and you are so enjoyable to read.