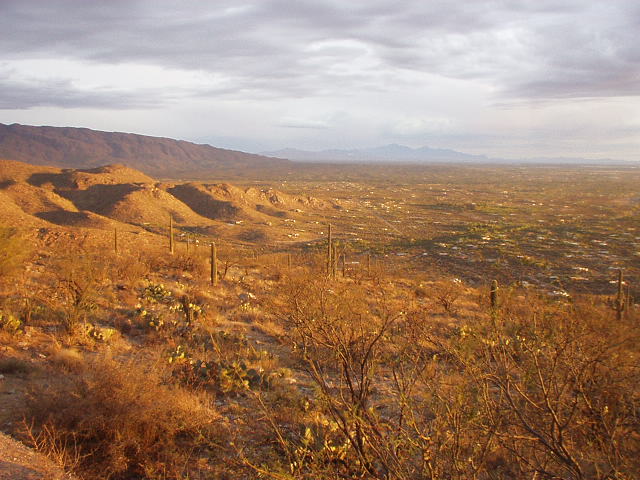 After Ironman Arizona I went down to Tucson to visit my friend Sarah, who just moved there from the San Francisco Bay Area a few weeks ago. The entire area, quite frankly, was a pleasant surprise. Here are some impressions:

Sarah isn’t too fond of the strip-mall-lined streets of the city itself, but I thought that downtown had some character. To begin with, there are bicycle racks made from different bicycle parts, giving them an artsy, rustic look. There seem to be many bars, restaurants, and bookstores. Sarah isn’t particularly fond of all of the college students who attend the University of Arizona at Tucson—especially all of the “young women wearing tight shirts and short skirts”—but I can’t say I minded that. We had lunch at Bison Witches Bar & Restaurant downtown, which served okay food, but what was particularly fascinating were all of the hotties in there mid-afternoon, and also, all of the older men who seemed to be (successfully) trying to pick up on them.

In the town itself, Sarah assures me there are plenty of tract homes, but at least in the periphery of Tucson, there are lots of adobe homes reminiscent of (but a shade paler than) those of Santa Fe, New Mexico. That was another pleasant surprise to me.

Perhaps Tucson’s greatest attributes are in its scenery. It is surrounded virtually on all four sides by the Catalina Mountains and Saguaro National Park West and East. Despite this being one of the driest parts of the world, these surrounding areas are remarkably green and lush with cacti and other desert plants.

In the evening, Sarah and I went through Saguarao West to a viewpoint high above the city and watched a sunset. It was spectacular, especially with the setting sunlight bouncing against the clouds in the sky and the easterly mountains. There are many scenic meandering roads through these mountains and national parklands which are probably great for a sports car or a road bike.

At least in this particular week in April, Tucson seemed a little cooler than the Phoenix area. Daily high temps from June to August are about 100 degrees though. It is more tolerable than Phoenix, but still a bit on the hot side.

All in all, the town feels a little rough on the edges with an old-west feel, but that gives it charm. There are almost half-a-million people living here, but it doesn’t feel too densely populated. Traffic seemed worse in Tempe, which only has 160,000 people. The surrounding landscapes make Tucson a stunning area.