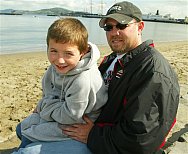 Who says today’s youths are lazy, spoiled, TV-watching, Nintendo-playing, ADD-affected juvenile dilenquents? Ok, so I am sure there are plenty but there also seem to be a rising number out there out to do some rather noteworthy things during their time on Earth.

In March there was the 12-year-old from Denver who scored perfect on the math section in the SAT exam. Then a couple of weeks ago there was the 4-year-old from India who ran 40 miles. Now, 7-year-old Braxton Bilbrey just swam 1.4 miles from Alcatraz to San Francisco, becoming the youngest person to do so.

Just as remarkable was he did so in 55-degree temperatures (wearing a wetsuit) and in 47 minutes. 47 minutes! Considering that my best open-water wetsuit-laden swim was during the Wildflower Triathlon in 2004—swimming 1.2 miles in 47 minutes—this second-grader would have beat me. Amazing. I couldn’t even doggie paddle when I was in second grade.

Apparently, this kid has been swimming 2 hours a day 4 days a week, and has done some short youth triathlons. He got the idea after reading last year that a 9-year-old did the swim. Hey, another thing this kid deserves kudos for—he reads the newspaper!

So now on my “list of things I want to do before I die” is the Alcatraz swim (I’ve been thinking about it for a few years now), even if the water is 55 degrees. Heck, if a 7-year-old can do it, so can I (gulp).