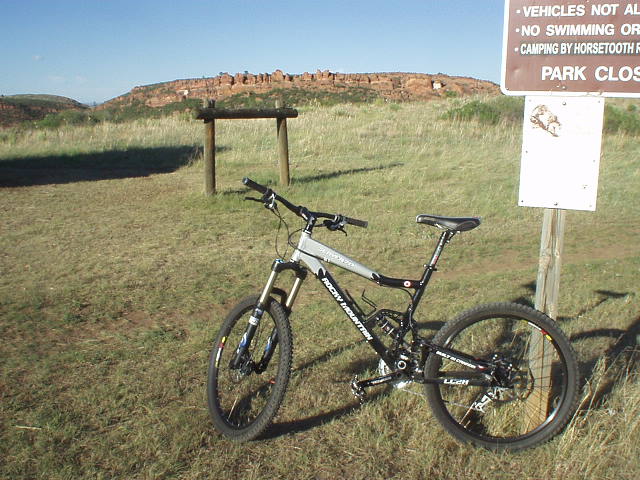 “I’m sure I’ll get another chance to test-ride a full-suspension mountain bike one day,” I said to my friends Kathrin and Guy over the weekend when we reluctantly left the Cycologists’ Bike Demo Day after only test-riding Salsa road bikes due to lack of time.

Never would I guess that another opportunity would present itself just three days later. As it turned out, Diana invited me out for a run at Lory State Park where Rocky Mountain mtb’s were being offered for test rides by a local bike shop whose name I do not recall.

Rocky Mountain Bicycles is a Canadian company (i.e. of the Canadian Rockies), something the company is very proud of. Why do I say that? Because all of the bicycles had maple-leaved paint schemes plus some rather large and garish “Made in Canada” decals on the rear seat stays. Each of their frames are handmade which “results in closer tolerances” according to a local enthusiast present who owned 4 (or 5?) of them. All of their frames contained aluminum, although some had a few carbon tubes as well.

This being my first time on a full-suspended mountain bike—or any high-end mountain bike for that matter—I was eager to try the bike on some trails and singletrack. The first impression was that these bikes are very tall with a high bottom bracket, presumably for clearance. This hit home when I stopped and tried to put my left down without taking my butt off of the saddle, and I could barely reach the ground.

Another impression was that there was a lot of suspension bob (both front and rear) whenever I would stand to pedal. One could adjust both the front and rear suspension settings on the fly if he was coordinated. I tried to adjust the dampening of the rear shock but could not perceive a big difference in ride while doing so; admittedly, the trail I was on during then wasn’t too rough.

When I did hit some rough singletrack I did really appreciate the full suspension. The suspension allows a lot more control over bump and hence one can ride faster than on a non-suspended bike. Otherwise, on well-groomed trails I would much prefer a hardtail.

The price tags of these bikes were steep; $3300 for the one I was on, and $3700 for the Shimano XTR-equipped bike Diana rode. I noted that was more than either of my first cars and Diana said she would rather spend the dollars on a new sprinkler system. Still, this was a good experience and thanks to those bike folks for hosting the demo rides. For sure, there will be more mountain biking in my future especially with trails and views such as the ones below in Lory State Park!