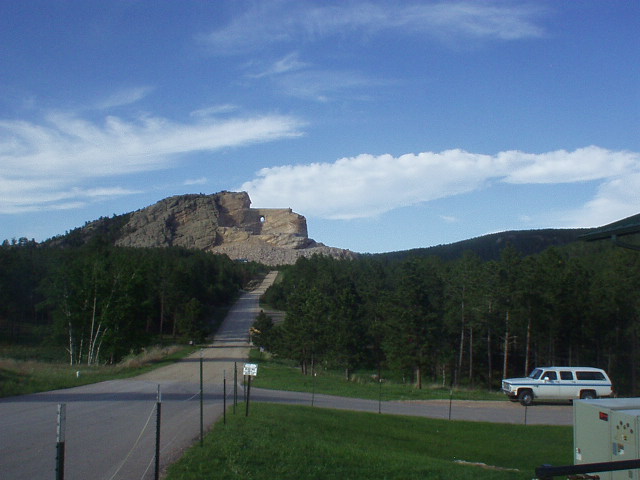 “My lands are where my dead lie buried,” proclaimed Crazy Horse sometime during his short 35 years of life.

No wonder, though, the U.S. kept antagonizing the Native Americans here in the late 19th Century. The Black Hills of South Dakota—accurately described as “an island of trees in a sea of grass”—feature the tallest peaks between the Rockies and the European Alps. The Lakotas and other tribes considered them sacred, and after seeing them myself, so do I.

The main feature of the memorial is a granite mountain carving—the largest in the world—that was begun in 1948 by Korczak Ziolkowski at the request of the Lakotas. The Lakotas conceived this project as sort of a Native American response to Mt. Rushmore. The sculpture is a work in progress; so far only Crazy Horse’s head is completed. Korczak passed away in the 1990s but his family continues to be in charge of the project. The head of the horse he is riding has been blocked out and will be sculpted next.

The visitor complex also features an Orientation Center, Indian Museum and sculptor’s studio-home and workshop. This is a privately funded project—funded largely by visitors and not the federal government (that is how Ziolkowski wanted it)—with admission being $10. This seemed like a reasonable amount considering the proceeds help complete what will be one of man’s greatest “natural” creations—a sculpture that dwarfs Mt. Rushmore and even the Egyptian Pyramids.

For more information on the memorial, read this Wikipedia article.