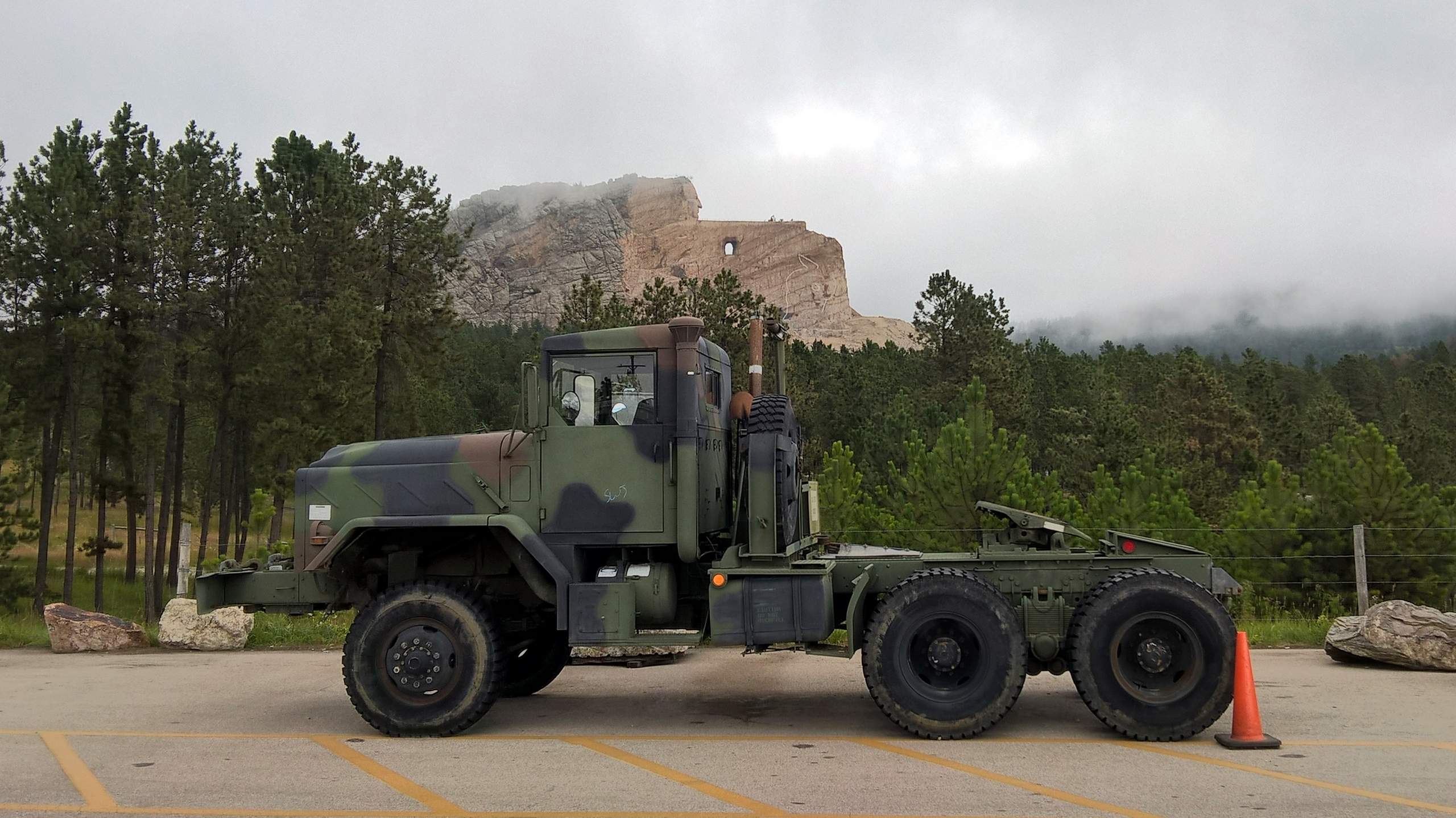 It was nine years since I had visited Crazy Horse Memorial for the first and last time, so I was happy to go see it again, this time with Maureen. The mountain sculpture had been under construction since 1948, so I wondered how much has the monument changed in the last nine years?

The answer, which can be confirmed by comparing my 2006 photos with those on this page, was a bit disappointing. It appeared that the sculpture looked the same. Nothing had changed.

Well, almost nothing. As Maureen quipped, “they managed to draw the outline of the horse’s head on the mountain in the last nine years.” Also, there were some changes at the visitor center. For example, the car-sized yellow air-compressor that Korczak Kiolkowski intermittently used when it was working now had a sign on it that said kaput, to represent all the times it conked out on the sculptor. A university for North American Indians was now on the grounds and boasted about 20 graduates last year. The Harley-Davidson motorcycle inside the visitor center was different.

But there is no denying that for a monument that rakes in several millions of dollars annually in visitor fees and has garnered $19 million in donations from wealthy philanthropists over a recent five-year period, the amount of progress on the actual sculpture itself has been eensy-weensy. The Chinese government, were it in charge, would have likely completed the entire project within Barack Obama’s two presidential terms—or maybe even one of them. Even the U.S. government would have probably been done within two or three decades. After all, it did manage to complete Mt. Rushmore in 12 years using Depression-era technology, although that sculpture is only an eighth of the size the Crazy Horse Memorial is envisioned to be.

One reason for the snail-like pace was that there has been essentially only one man—Korczak—and his family working on the project. Korczak worked nearly single-handedly on the mountain for 34 years, and then his widow spearheaded the project for another 32 before passing away a couple years ago. The couple had 10 children, of which 7 work on the project, but that is few compared to the hundreds that worked on Mt. Rushmore.

Another reason is that the Kiolkowskis have refused federal aid and help. Korczak felt that the U.S. government would not follow through on their promises; he pointed out its broken promises made during the Treaty of Laramie during the 19th century. The project, hence, is entirely privately funded.

You have to wonder if Korczak got in over his head on this. Initially he was planning on doing a sculpture about the size of Mt. Rushmore; then suddenly he became extremely inspired and decided to carve up the entire mountain. He also came up with the grandiose vision of having an Indian university, medical center and museum on the grounds.

Whatever the case, you have to admire his ambition. And I suppose there has been progress on all those things. I do not think I will hold my breath, however, about the sculpture being completed within my lifetime.

At night, Maureen and I returned to Crazy Horse Memorial to watch their narrated laser show. Essentially, the mountain was turned into a drive-in theater projection screen, with lasers producing images and words that told a story. The presentation was about 45 minutes long. I would recommend seeing it if you ever make a visit to this monument-with-no-completion-deadline.