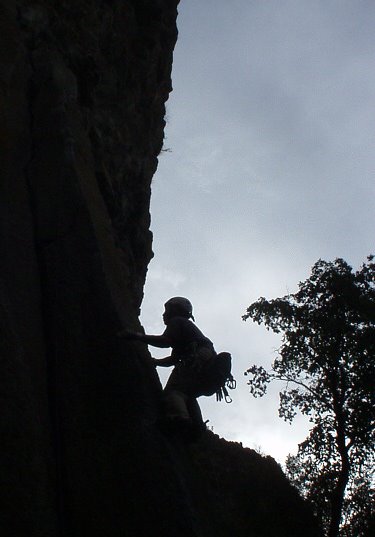 I biked over from Stockton to Ripon on The Tank and met my friends on a corner where a convenient outdoors country market was located, replete with fresh fruit, nuts, and port-a-potties. From there, we went in Tori’s “SUCK” (SUV/truck) over to The Grotto, located in the Sonora Pass area. When we turned off onto a rugged dirt road where Chris even had to step out of the SUCK to open rusty tubular gates, I could see why Tori wanted four-wheel-drive plus high ground clearance five years ago when she was shopping for a new vehicle. Her Explorer Sport Trak was near-perfect for this, with generous cabin space for 4-5 adults and a covered trunk bed with enough room for my mountain bike and lots of bags and bins full of climbing gear. These attributes—at least on this day—more than made up for the 17 mpg the vehicle reportedly gets on the highway!

We then hiked up some rather steep trails up to Table Mountain, which overlooked a picturesque body of water encircled by oak and rock.

After scrambling down some rock we found ourselves surrounded by vertical granite walls sporting several thin, longitudinal cracks. One other group of five were present when we arrived; later on in the afternoon, these people were supplanted by another group of dudes who lived locally. The weather was virtually perfect today and much warmer than the normally frigid temps that Tori and Chris said were more the norm here.

Tori, Chris, and I started out by climbing a 5.9 chimney. This was the only climb I would not fall on, and I was happy I was not going to be leading anything today. We then muscled ourselves up increasingly harder climbs, including the 5.10b “Three Fingered Jack,” a 5.10c hand crack, and a 5.11 column.

The 5.11 was the most interesting, which required us to grasp the outside edges with our hands and constantly shift our weight to gain good traction while smearing with one of our feet. I had to hang on the rope multiple times as numerous neurons were firing at pain receptors in my forearms.

I noted that climbing was the most tiring thing I did all week. I still felt pretty fresh after the long runs and double century bike ride, but after just 2-3 climbs (not to mention 4), my entire body was more exhausted than if it had made a few rounds on a fitness gym training circuit. Yet, the climbing was fun, and in the company of friends, a great way to spend the day.

Driving directions to The Grotto are at colororange.com.