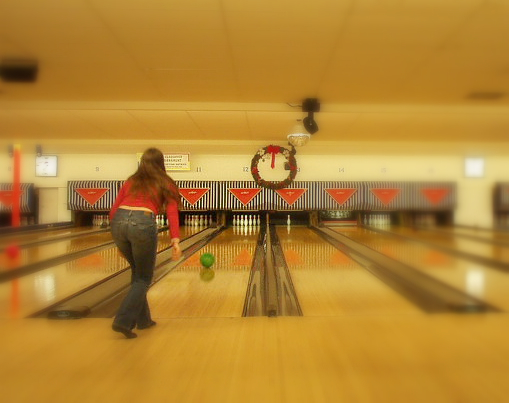 Yesterday was another snow day for Fort Collins. Never mind that this time we only received about 1.5″ of new powder and compared to last Saturday’s two-degree day, it was positively “toasty” at 20 degrees F. It was a day where for some snow-weary people may have preferred to stay indoors.

Never fear, because there are plenty of indoor activities to do out here.

For example, on this day, Ryan, Josh and I went bowling. This was Ryan’s idea as it was her b-day. So we met up at Chipper Lanes and put on those colorful, flat-bottomed shoes that bowling alleys love to carry so that their customers can look like clowns. Then it was time to throw some balls in the general direction of the bowling pins.

Josh and I showed off our bowling prowess by picking out the most manly bowling balls we could find (15 pounds) and then promptly guttering them. Meanwhile, Ryan was striking or sparing every other time she picked up a ball. Soon Josh and I were succumbing to achy forearm syndrome and after a few throws we traded the 15-pound boulders for lighter balls. We were successful at guttering those too.

Despite the travails my scores ended up being quite good, or at least would have been if I was three years old and the game was, say, golf. However, the game soon degenerated into a “can the two guys beat the one girl if you added up the two guys’ scores together” match. Pathetically, we still lost.

After saying goodbye to Josh and the b-day girl it was time to head over to the Gym of the Rockies to climb with Rhea and Cooper. Rhea had warned me that she wanted to take the lead test today. Cool. Never mind that we had only practiced leading one time together two months ago, and in the interim, Rhea was spending more time surfing out in Southern Cal than scampering up rock holds.

The Gym of the Rockies, it turns out, is pretty lax when it comes to lead testing, at least compared to gyms in the San Francisco Bay Area. For example,

Rhea ended up backclipping twice (once during the “mock-lead” and during the real test), but passed anyhow. Anyhow, hooray! We can lead climb in the gym now!

After I got home, it was football time. When I turned on the T.V. I was surprised that the Colts-Patriots game was tied up in the 4th quarter at 31-31, because the Patriots were leading at one point by 21-3! Anyhow, it was a really great game even though I was rooting for “anyone but the Colts” (since they had beaten Steve McNair and the Ravens last week) and the Colts won. This merely continues my streak of rooting for teams who end up losing this year.

In a couple of weeks I will once again root for “anyone but the Colts”—i.e., the Bears in the Super Bowl. Of course this means that they will now surely lose (sorry, Chicago). Go Bears!

[...] For example, today Ryan, Josh and I went bowling. This was Ryan s idea as it was her … Josh and I showed off our bowling prowess by picking out the most manly bowling balls we could find (15 pounds) and then promptly guttering them. … – More – [...] ↩Reply