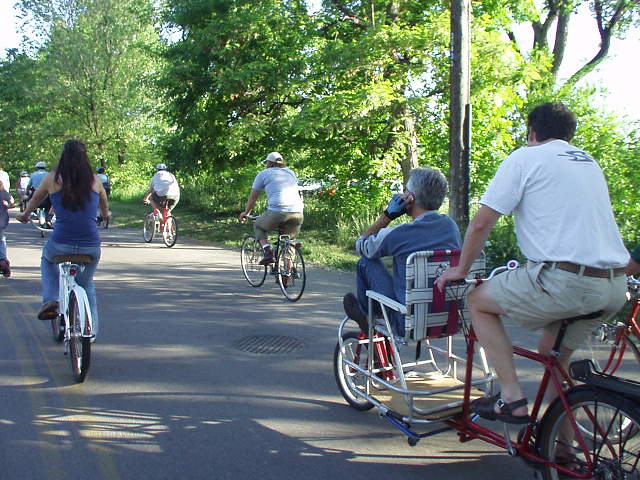 As I mentioned a few weeks ago, it seems like the bike-crazy town of Fort Collins has some sort of cycling event seemingly every weekend. This weekend was no exception, with the Colorado Cycling Festival being held Friday-Sunday. Kicking off the festivities was a Vintage Cruiser Ride through Old Town Fort Collins.

My friend Sarah was visiting from California for the weekend, and happily she was keen on joining me for some cruisin’. We rode over to Old Town (with me riding Carrie the Commuter Bike and her riding Cranky the Mountain Bike) where we joined up with 100 other Fort Collins for a mini-version of Critical Mass.

This ride differed from Critical Mass, however, in that the CM rides usually are in-your-face rides that try to raise cycling awareness among the communities (and usually end up annoying lots of drivers). In contrast, this ride was more like a party on wheels that mainly took neighborhood roads or bike paths, with most drivers and their cars being considerate and accommodating. Some driver’s even gave a thumbs up or honk of approval.

Three-quarters of the ride in, we all stopped at Lee’s Cyclery across from the CSU campus where there were cups of water and free cookies. Yum. After the ride, slick Australian-designed Knog LED headlights about the size of a wrist watch were given out to all participants as another perk.

Only about half of the participants were actually riding cruiser bikes, and I noted afterwards that this was “probably the longest five-mile ride I’ve ever done” (taking over an hour). Yet, it was also one of the most fun five-mile rides I’ve ever done, all in the festive Fort Collins spirit.