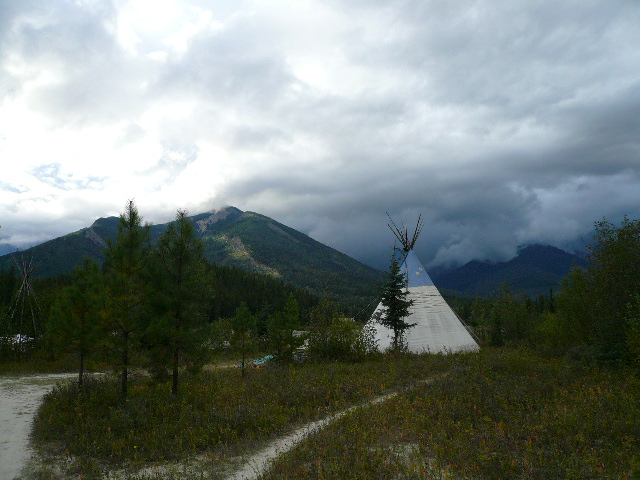 “In addition to staying in a hut,” I emailed Lisa at one point before our Canada road trip, “we can stay in a teepee.”

In contrast to other folks who, I imagine, focus their vacation planning time on what museums and historical landmarks to visit, our discussions degenerated and revolved around the most bizarre or interesting structures we could sleep in.

Lisa started it. She sent me a link to the “coolest hut ever” that also happened to be the highest inhabitable structure in Canada at over 10,000 feet.

Unfortunately, we ended not making the trek up to the Abbott Pass Hut due to there being too much snow, but were able to stay in the lower Elizabeth Parker Hut. Normally one needs to make reservations for the huts months in advance, but we got lucky and were able to claim the last two spots the morning we arrived in Yoho National Park.

The hut actually was a pretty posh log cabin with tables, chairs, gas stoves, and cooking utensils, so the teepee we stayed in the night before in Golden, BC was the more novel experience. Inside the teepee was a campfire ring and four very comfortable beds. As a light rain soothingly tapped upon the rawhide walls of the teepee, I got one of the best nights of sleep during the trip.

Another great place we stayed at was a mundane-but-decent hotel in Tacoma, Washington, which was not so interesting because of its structure or furnishings, but because of the restaurant next door. This restaurant—part of an internationally renowned chain—was famous for its buffalo wings and good fun. And girls in skin-tight shirts and super-short shorts.

Somehow I got Lisa to agree to eating here with me (maybe because it was late at night, the restaurant was just a one-minute walk away and she was both very tired and hungry!), and she maintained a good humor about it despite being the only woman in there aside from the scantily clad waitresses. She even laughed about the sexist signs in there such as, “Men – no shirts, no service; Women – no shirts, free food.” She even thought her salad was pretty decent. She did keep her shirt on, though.

Aside from snoozing and doing things such as running through the evergreen forests of Squamish and hiking at Yoho National Park, we spent a bit of time in the car. Actually, a lot.

There were various ways we passed time in Lisa’s Honda Accord Hybrid. For example, when I was driving, I’d pop in some French language CDs into the CD changer.

“Remember,” piped the voice of a now-deceased French linguist out of the speakers of Lisa’s Honda Accord Hybrid over and over again, “there is no is-ing, am-ing, and are-ing.” After Michel Thomas repeated this for the umpteenth time, I had to check with Lisa to make sure she was not being driven up the wall with my French lessons, ready to scream, “Non! Pas plus! Pas plus!”

Lisa, on the other hand, resorted to a habit more becoming of a Californian valley girl: text-messaging. She text-messaged a lot inside the car, and I just don’t mean while she was peacefully sitting in the passenger seat. She’d text message with one (or zero) hands on the steering wheel while I nervously watched her glance up and down from her phone to the road, sometimes while the car weaved back and forth. Fortunately (miraculously), we did not get in an accident. Never mind that this practice is now illegal in the state of Washington and should be made illegal everywhere else!