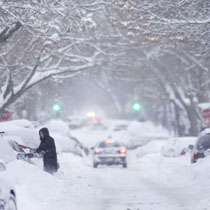 The other night I got a frantic voicemail from the new owner of Goldie, my former MGB. It was in the form of a question.

“I forgot to ask you what kind of antifreeze you had used—a summer type, or winter type?”

At first I was a little confused by the question because as far as I know, most antifreeze manufacturers do not sell different formulations specific to certain seasons. But then I realized Steve (the new owner) must have wanted to know what antifreeze-to-water ratio I had used. (About 50/50.)

I actually did not think much of this question, but two days later, I received an email forwarded by my friend John. His friend in Montreal reported,

15 inches of blowing snow, roads are crazy, 3 to 4 foot snowbanks. The city looks like this (see photo above).

Hmmm, I think I agree with John when he commented,

Ok…I like snow but I think Montreal is off my list of places to move. Hehehehe! This seems to be a regular thing with Montreal. They have it as Hot as it is in FL and then the freezing tundra in winter.

I like snow too, but living with those quantities would be difficult. Thankfully, Fort Collins gets a whole lot less than that. In fact, so far this season it has only snowed once—and only about five inches that melted off the roads very quickly.

Not sure if this is due to global warming, but during this mild winter, I’m not exactly sweating it. Or driving through three-to-four foot snowbanks for that matter.