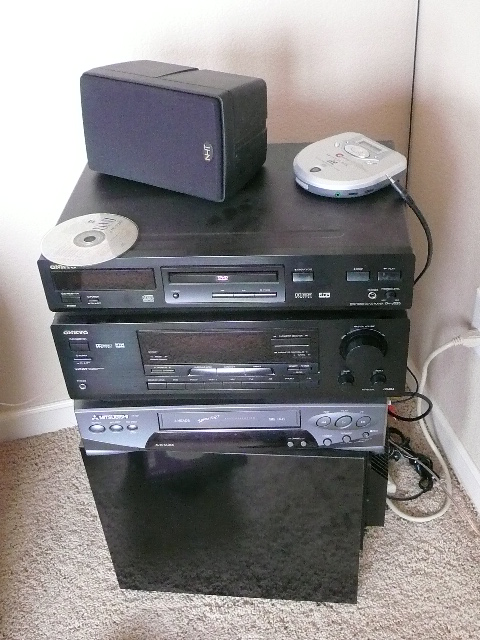 Here are two more to add to my stash of broken electronics. Both of these are from 1999 and include a portable compact disc player and a powered subwoofer.

At least the portable CD player is not a big loss. First of all, thanks to China, it only cost $25-35 (I forget the exact amount) at Geekland, er, I mean Fry’s Electronics. I was using that in the MGB through a cassette adapter, and of course, I don’t have the MG anymore. (Incidentally, the cassette adapter also broke several years ago.) I won’t bother replacing the CD player especially since my $17 MP3 player has been working well.

The subwoofer is a bigger deal. First of all, it was an NHT Subwoofer that cost $400 (clearly, this was before my frugality phase). It—like my NHT main speakers—sounded fantastic , but over the last year started humming loud enough to shake the neighbor’s house off of its foundation even without any music piping through it. I thought it was a ground-fault issue, and could get the subwoofer working 50% of the time, but now, it is dead. Unfortunately, there aren’t any authorized NHT repair shops outside of Benicia, California, and according to NHT’s website, non-warranty repairs typically cost $75-150 anyhow. Add on shipping, and the potential cost could be as much as $200. No thanks; I’ll either buy a $80 brand new subwoofer that is almost as good, or none at all.

At least the Mitsubishi VCR, Onkyo DVD player (both from 1999) and Onkyo receiver (circa 2002—a replacement for a Harmon/Kardon receiver that broke twice!) are still working. I think they are the oldest electronics I have in the house at only eight years.

I wonder how many more years I can squeeze out of them.