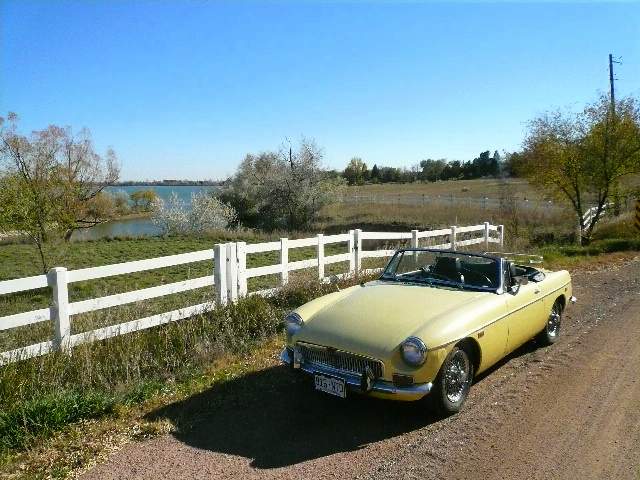 The end of an era. Goldie—my (usually) faithful British roadster that was the subject of my very first web pages 12 years ago—is leaving me. Last Thursday was our last drive, the Last Dance, and tomorrow morning will be the Big Goodbye. A trucking company is coming to pick her up and transport her new owner, Steve, in Quebec (yes, Canada!). There she will get to mingle with Steve’s other MGs—including an MGA—and presumably be driven more than under my care, at least when the snow up there rescinds.

The decision to sell the MGB was not an easy one. I’ve been vacillating about doing so for the last three years, and admittedly, a major turning point was during the epic drive from California to Colorado last year when Goldie had gotten three flat tires, was running on three cylinders for the last 500 miles, but nevertheless made it to Fort Collins from Stockton in 25 hours (1150 miles total). During that adventure, I had text-messaged my friend Lisa Z. asking her to “remind me to sell the MG”—something she had not been good in nagging me about, but ultimately, I needed no reminder.

The reasons for selling her include the following:

Hmmm, the voice of reason. Guess I am getting older.

One nice thing about classic cars is that it’s not unusual for them to not depreciate. In Goldie’s case, I actually was able to sell her for a few hundred dollars more than what I bought her for 12 years ago even the car is in worse shape now than back then. Of course, during that time (and approximately 75,000 miles) I’ve spent a lot on parts (which are relatively cheap for MGs, but they add up) and labor (even at my labor rate of two cents per hour).

Rationalizations, breakdowns, and practicalities aside, it’s been a memorable 12 years with Goldie, and her departure marks the end of an era for me. Full speed to the next one. The British roadster may be gone, but the spirit of adventure that she embodied remains. I promise.