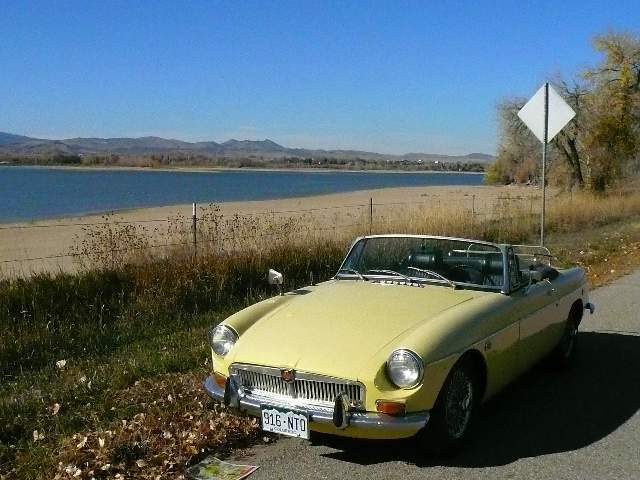 It’s always great to hear from old friends who were an important part of my life—even the gal who now speaks in tongues or the psycho chick whom I’m not exactly sure why I dated in the first place. Hence, I was thrilled to hear about Goldie today for the first time in two years. It’s not like she can compose a thoughtfully typed out e-mail or post a status update on Facebook. She’s a British roadster, you see.

But, thankfully, her current owner—Steve G. of Quebec, Canada—keeps me in the loop now and then, including tonight. He called with a couple questions but mainly to tell me about the yellow ’69 MGB that he is enjoying immensely. Remarkably, since taking delivery of the MGB in November 2007, Steve has driven the car from Buffalo, NY to his home near Montreal along with subsequent trips to Toronto (Ontario) and Vermont. These were trips of hundreds of miles in which Goldie did not break down once and had gotten only one flat tire. In light of my epic 1,150-mile drive from California to Colorado where she got three flat tires and was reduced to running on three cylinders, I consider this amazing. Miraculous, almost.

Not that I had completely lost faith in her. After all, in 1997-1998 she made it down to Los Angeles, Death Valley, Yosemite and San Diego from the San Francisco Bay Area without leaving me stranded or making me lift her bonnet more than a couple of times. But that was over a decade ago when she was decidedly less tired. Since then her not-so-ingenious-even-when-new British engineering had degraded even further, and even with her rebuilt engine of 2002 the rest of her had aged quite a bit less gracefully than Madonna.

Happily, Steve is a true MG enthusiast who has been trying to get Goldie back into tip-top shape. This is what he has already done:

Work Steve intends to do includes the following:

Phew! Just typing all that makes me tired. Working on vintage sporting machines is a labor of love, something that Steve is clearly keen on doing. I wouldn’t say I have completely lost the passion for working on beautiful, heart-stirring machines, but I am rather glad the type of automotive tinkering I do nowadays is limited in scope to routine maintenance on brilliantly engineered vehicles like the Audi TT as opposed near-restorations. It’s like doing light exercise versus undergoing liposuction and plastic surgery.

Speaking of plastic surgery, that is one thing Steve is not focusing on performing on the MGB for the meantime (aside from replacing the front left fender). Aside from having rather pronounced tan lines, the car (Steve reports) still looks good so he is focusing on mechanical soundness and reliability in the meantime. To him—as she was to me—she’s a fun daily driver and not a trailer queen that does nothing but pose at car shows.

It was one thing I was delighted to hear about my old friend. Now if Steve would only send me some photos of her. Once he does I’ll be sure to post them here.