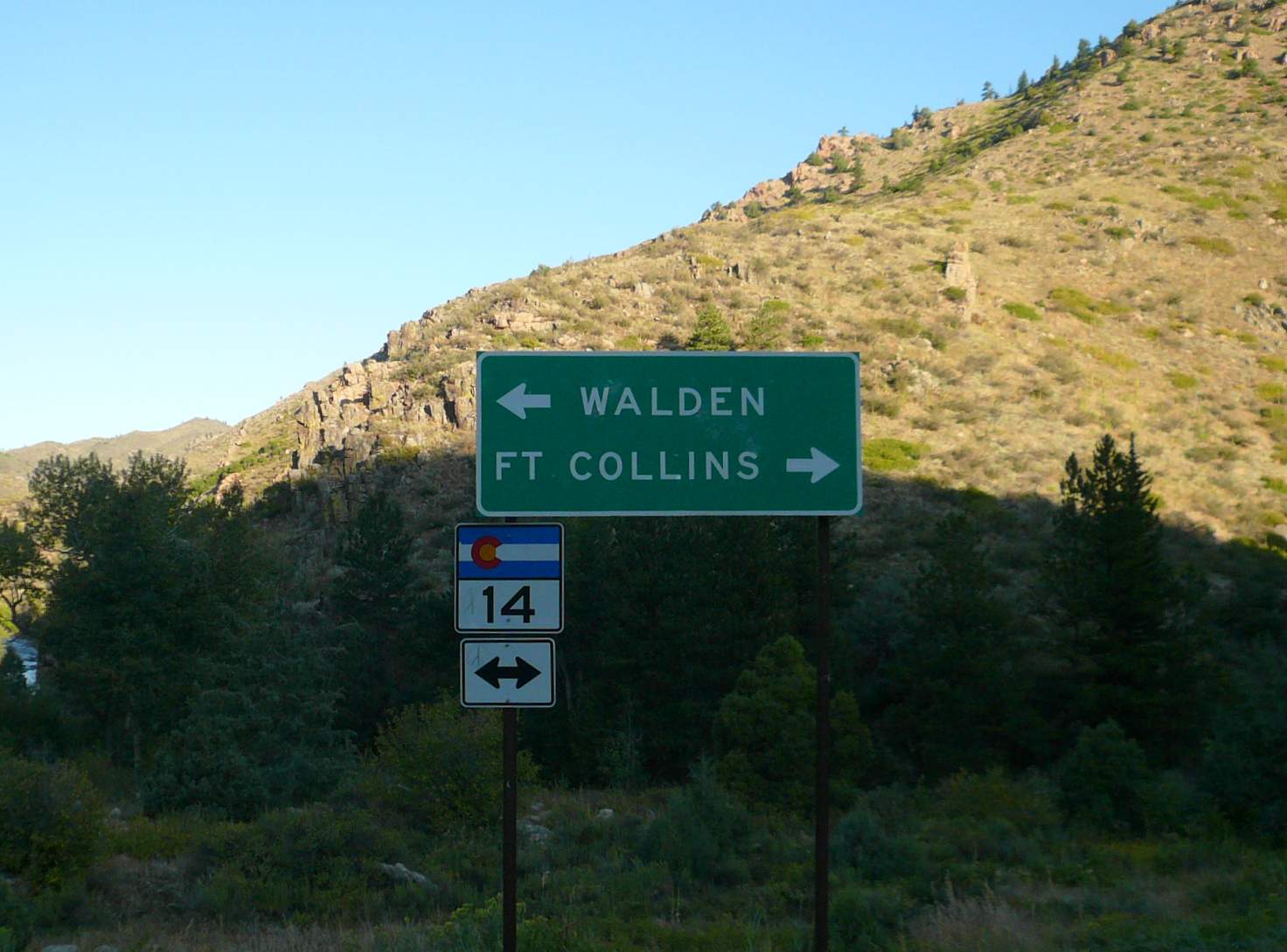 “I went to the woods because I wished to live deliberately, to front only the essential facts of life, and see if I could not learn what it had to teach, and not, when I came to die, discover that I had not lived,” said Henry David Thoreau.

These words resonated in my mind as I biked over to Walden for my annual double century. Never mind that this was not the Walden in Massachusetts where Mr. Thoreau lived the life of an ascetic between 1845 and 1847, but rather a town of 600 people 60 miles east of Steamboat Springs in Colorado.

Why Walden? For one thing, the edge of town was exactly 100.0 miles from my doorstep, making a logical turnaround point for my annual double century. Getting there from Fort Collins is a no-maps-needed affair as Highway 14 through the Poudre Canyon leads right to it.

Secondly, the idea of going to a town named Walden by bicycle appealed to me spiritually. I envisioned a simpler village that was not besieged by the materialism or complexities of modern day life. The journey would require no motors except a human-powered one; no electronics except the elementary cyclometer on the handlebars and a cell phone for safety’s sake. It would just be me and my bike from dawn to dusk on a road winding through the wilderness, with a brief lunch stop in that town west of Gould and the Roosevelt National Forest.

I started riding at 5:25 in the morning, which placed me in darkness for another hour but offered glimpses of the horizon changing color from black to orange to blue as the sun lifted itself up behind me through the sky. On Highway 14 along the Poudre River, traffic was more scarce than American-made goods at Wal-mart and particularly uneventful until I had already pedaled 50 miles. Then a few motorists and I were stopped by a road construction crew for 12 minutes, and the friendly construction worker holding onto to a stop sign advised me to “try to keep up with traffic as much as you can” once we got rolling again.

“Will do,” I replied. Thankfully, none of the vehicles exceeded 20-30 miles per hour through the construction zone . A worker holding another stop sign at the end of the zone even remarked as I passed him, “You kept up with traffic pretty well!”

A couple hours later, I crested the top of Cameron Pass (elevation 10,276 feet) with a sigh of relief. Effectively I had reached the top of a 72-mile climb. And now it was all downhill to Walden.

Twenty-eight miles and 1.2 hours later I pulled up to a convenience store in the town with the famous name. Made it! I purchased a liter of water, a bottle of Gatorade, Fig Newtons, Nature Valley Trail Mix granola bars, and a jumbo bean-and-cheese burrito. It was the first burrito I had eaten since the charred-but-frozen burrito fiasco since the Curecanti camping trip with Tanya, and I text-messaged her saying that I was eating one in her honor. Despite not burning it or catching it on fire in the store’s microwave, it was delicious. Even convenience store food can taste divine when you’re hungry.

I then leisurely pedaled up and down the main drag in Walden, noting its Wild West feel and the dozens of chromed-out cruisers (motorcycles) parked in front of a movie theatre. Movies, gas stations, and Harleys were all things that Mr. Thoreau never even dreamed of, I mused. When he passed away in 1862, crank-driven bicycles were just being introduced.

Heading back the way I came from, I crested Cameron Pass once again and was especially pleased to think that the next 60-70 miles were almost entirely downhill, albeit a gradual one. This would be fun.

At Mile 150 I went through the road construction zone in the Poudre Canyon again and a worker who recognized me from earlier in the day yelled, “You don’t get tired, do you?” I replied with a half-truth (“NO!”) and a smile and then was really inspired to put down the hammer for the next couple miles, keeping pace with cars and trucks going 30+ mph.

Farther down the canyon near Rustic I made my second-and-final resupply stop (just for water) in Rustic. After continuing on, I focused on riding just inches way from the right-most edge of the road as for the first time all day I was encountering cars every few minutes. With the virtually non-existent shoulder I was a little concerned about encountering any redneck drivers here, including one who screamed an unintelligible mono-syllabic guttural sound out the window of his pickup truck.

Somehow I didn’t see a motorcycle accident or a wildfire in Boyd Gulch despite passing by their locations at roughly the times they occurred. Perhaps it was because by this time I was preoccupied with getting home before dark.

Pulling into my driveway at 7:45 p.m., I did win the race against nightfall by half-an-hour. Back in the comfort and safety of my home, I reflected upon how in Henry David Thoreau’s time no one had to worry about motorcycle accidents or getting run off the road by a truck driver. But I also thought about how lucky we are to have modern conveniences like electricity, clean running water and central heat.

All in all it was a great day on a road bisecting the woods. “We should come home from adventures, and perils, and discoveries every day with new experience and character,” said Henry David Thoreau. I believe I did.