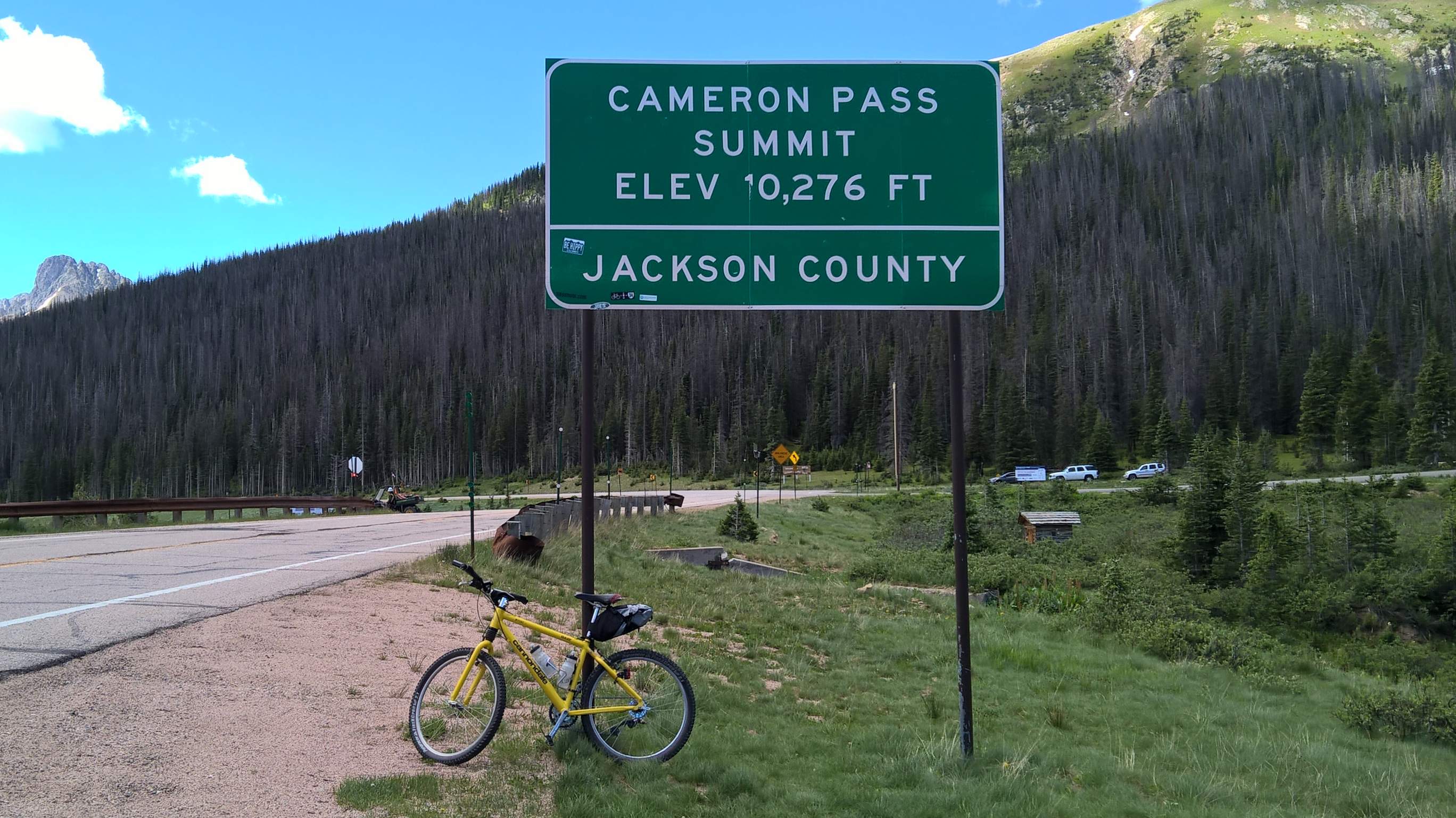 When I went over to Walden to cheer on the leaders of the Trans Am Bike Race the other week, I fully had envisioned bicycling instead of motorcycling there. There was not enough time to do so, however, so my nearly annual 200-mile bike ride to that quaint town on the other side of the Poudre Canyon got pushed back to now.

On each one of my four previous non-motorized journeys to Walden I had ridden four different bicycles: my red and classic aluminum Cannondale 3.0, a blue and even more classic steel Gitane Criterium, the modern and carbon fiber Litespeed Archon C2 “Super Bike,” and a completely nontraditional red Reynolds Wishbone recumbent.

Only a pair of bicycles in my garage had not made the journey: the yellow aluminum Cannondale F700 and the bronze pot-metal Huffy Cranbrook Cruiser. Despite the former’s knobby tires, it undoubtedly was the faster of the two. Now was its turn.

I woke up at 3:00 a.m. and was out the door by 3:40. Part of the delay was in trying out the excellent Cycle Tracks GPS app that works with Windows 10 Mobile and Windows Phone 8 devices. I loaded it on my old Nokia Lumia 820 for the first time. The app is free but for a few dollars it can download routes created with RideWithGPS.com (enabling it to give turn-by-turn directions) and then upload to Strava. It’s a great app that ultimately would make me not mind that the RideWithGPS app is not available on Windows phones.

The sun started to peak over the horizon an hour later. It was surprisingly cool enough outside that I stopped at Ted’s Place to put on lycra leg warmers.

Then I entered the Poudre Canyon and started the long, but gradual, nearly 60 mile climb. During the roughly six hours of ascending, I noticed that the ring and pinky fingers on each hand were occasionally going numb, suggesting that my ulnar nerves were getting compressed somewhere. This was a little discouraging as I had added ergo grips and bar end extensions and even flipped the stem for a more upright position and less pressure on the hands.

I tried rotating the ergo grips up to keep my wrists more aligned with my forearms (much like a palm rest on an ergonomic keyboard). I’m unsure if that helped, but moving my hands to the bar and extensions seemed to reduce or eliminate the numbness. So did raising my hands and shaking them out occasionally, or stopping completely. Throughout the rest of the ride the occasional finger numbness was not a problem and my hands retained all sensation after the ride was done.

It took seven hours to reach the top of Cameron Pass (Mile 70, marked by highway mile marker 65), meaning that I averaged 10 miles per hour on the way up. I was quite happy with that and was especially happy to be descending now.

However, as there almost always had been every time I’ve previously biked the Poudre Canyon, there was road construction which delayed me by 10 minutes. Worse, from Gould to Walden was a massive headwind which entirely nullified the downhill. Fortunately I brought an “emergency” 16-ounce bottle of water as the store in Gould I was hoping to resupply at was closed for the day.

When I reached Walden I was ready for my traditional convenience store microwaved burrito. I also chugged a 32-ounce Dr. Pepper and packed some mini-donuts to go.

The second half, or the return trip, was much easier with a strong tailwind or a long descent. Thus, the only time I stopped was at Mile 155 for water and a 12-ounce can of Pepsi.

I even made it home before it got dark. So now five of my bikes have made the 200-mile round trip journey to and from Walden. Only the Huffy cruiser remains. Maybe next year?

Comparison of Bicycles for this Ride

While the comparison of the ride times for the five bicycles above does not constitute a controlled scientific study (particularly because my fitness varied year-to-year and ride effort varied ride-to-ride), a few insights can be gleamed.

This venerable 20-year-old, 26-pound, cantilever brake-equipped mountain bike (which also was one of the original eight finishing bicycles of the Tour Divide) thus deserves respect!