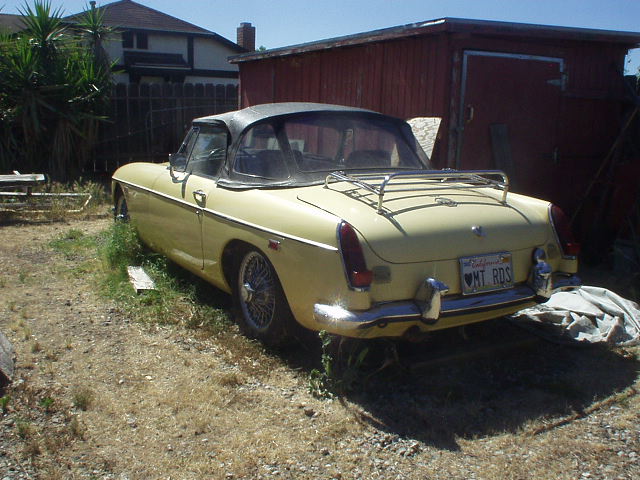 I received a surprise on Christmas Day: a phone call from Steve, the current owner of the 1969 MGB (dubbed Goldie) I owned for 12 years, including for a couple of years during college. Steve lives in Montreal and is remarkably old-school who doesn’t text or email. But some years he will call with a welcome update on the car. This was one of those years.

He left the following voicemail:

Hi Felix. Merry Christmas, it’s Steve, the guy who bought your yellow MGB and just wanted to say hi. Haven’t spoken to you in a few years.

I haven’t driven the B in a few years. I’ve left it in a barn and this coming year, I’ll take it out. I got a gas tank. There’s a lot of crud in it and it keeps clogging up my fuel filter and I got to change a brake master. It’s leaking.

I’ve got the tank and the master; just going to have to pull it [the car] out of the barn and take it into the garage here and put it up and do it. And so I am running with it this year.

I’m doing a lot of work. I did a lot this past summer on my MGA. I’ve been busy getting parts for the past twenty years and I hope to have it ready late this summer and that’s it.

I wish you a very healthy, happy New Year. Just watch yourself as COVID is a pretty nasty thing. And that’s it, my friend. Take care, bye-bye.

I returned his call a couple days later. Since he has an MGA, I told him about the Ford v Ferrari docudrama which shows an MGA in Ken Miles’ garage and has Matt Damon and Christian Bale as some of its stars. He had never heard of the movie and I hope he gets a chance to watch it.

Otherwise, he assured me he will try to get the MGB running this spring after replacing the brake master cylinder and gas tank. Those are two items I did not have to replace on the car during my ownership. His remark about the brake master cylinder reminded me about how I had to rebuild the clutch master cylinder due to a leak. Because of the leak, I had to bleed the clutch at midnight in a Stanford parking lot using a can of beans (after I ate the beans) so that I could drive home. That was during my senior year of college when I lived off-campus.

Steve asked for my address so he could send some photos of the car later this year via the post office. If that happens, I will be sure to post those photos on this site. It would be fun to see how the car looks like after all these years.

I received the following holiday card from Steve. He hasn’t been able to take any recent photos of the MGB yet, but he did send me this photo of his 1958 MGA parts car.

Maybe later this year he will send me some photos of the yellow MGB. Between that and his 1955 MGA, it sounds like he has plenty to keep himseld occupied in 2022.