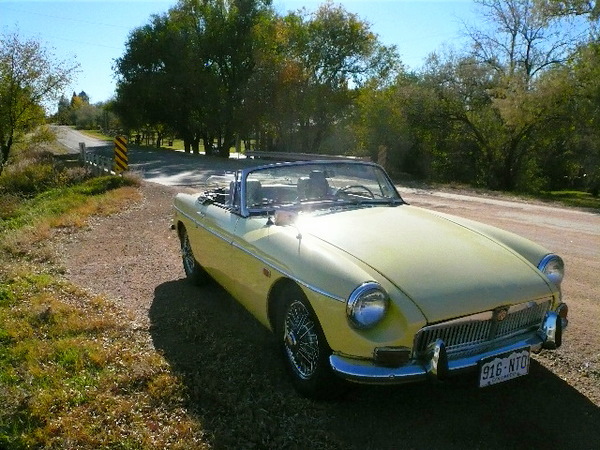 “How are you doing without the old MG?” is a question I’ve been receiving a lot lately. And the answer may be a surprise:

And of course, there’s Goldie‘s replacement: the Buell.

Ah yes, Boo. She’s been running absolutely perfectly ever since I got her—a total hoot to ride. I’ve already written about her advantages over the MG, and they still hold. But there’s more than just the benefits of being thoroughly modern and maintenance-free and the astoundingly good gas mileage. Boo actually reminds me a lot of Goldie. Never mind that Boo is a motorcycle.

How can this be?

Well, for one thing there is the open air aspect. There’s also the noise. Even though both the Buell and the MGB have small-displacement engines, they sound (and feel!) much more substantial than they are. The MG roared while the Buell (with its single-cylinder thumper and Harley roots) rumbles. They both sound pretty mean when opening up the throttle, with generous amounts of tractor-like torque even at low rpms, without sounding tinny or pretentious like those lowered Californian Honda Civics with aftermarket glass packs wailing out a high-pitched scream.

The onslaught of the air and the exhaust and engine music collude to make riding the Buell or the MGB feel like you are going much faster than you actually are. The end result is that despite the Buell’s top speed of about 105 mph or so (roughly the same as the MG’s), I haven’t even exceeded 65 mph yet. I’ve felt no need to. That’s one thing I appreciated about the MGB: that you didn’t need to flout the law and speed limits in order to have a lot of fun.

Both machines are also light and a joy to carve corners with. All controls and gauges (or gauge in the Buell’s case) are simple, direct, and “right at hand,” as the British say. You feel like one with the machine.

Admittedly, there is also the sheer romantic impracticalness of the machines that draws me towards them. Or, rather, the complete expectation of their impracticalness, with often is unwarranted.

For example, I remember how Goldie once carried three people (including myself), their rock climbing gear, and a mountain bike (okay, only for one mile). And tonight, on the way back from Spanish Conversation Meetup with the Buell, I stopped by a market for five minutes to pick up some groceries and this was absolutely no problem. (Good thing I had brought a small, thin, scrunchable backpack that I could carry in my pocket in advance, though.)

If these things weren’t enough to make me think of the MG whenever I ride the Buell, than this never fails to:

Speaking of cars, tomorrow night I am attending the Denver International Auto Show. Can’t wait… I last went there two years ago, and a lot of newer eye candy has come out since then.

Now if only Nanjing/Shanghai Automotive Industry Corporation (the new owners of MG) would bring over the new versions of the “Modern Gentlemen” (how they are re-branding MG, which used to stand for “Morris Garages”) from (egad) China—or better yet, start manufacturing them in Oklahoma as Nanjing once promised. I would love to see a new MG at the Denver Auto Show one of these years that was a modern reinterpretation of their classic high-sport and inexpensive thrills formula, even if only the Chinese can do it.

Until then, it’s nice to know that there’s already a spiritual successor of the MG in the left-hand side of my garage, even if it does have two less wheels.