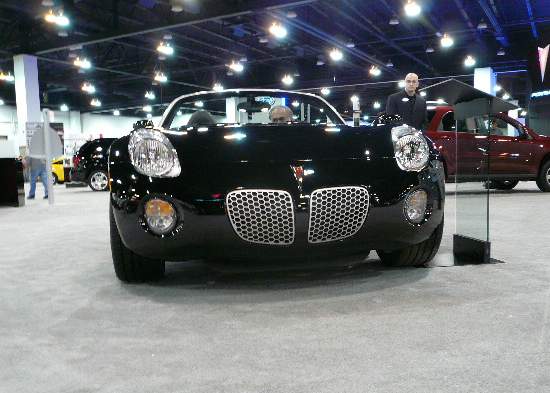 The 2008 Denver International Auto Show was a different experience for me than any other car show I’ve gone to prior, but not because there were, say, some wild new cars that I’ve never seen before. Instead, it was because this time I had the opportunity and time to sit in maybe 30 vehicles to tap my fingers on the center consoles, feel the materials of the armrests, and judge the stylistic merits of dashboards.

Why the sudden interest in interiors, you may ask? Blame it on a couple of cars I rented in recent months.

First, there was the Pontiac G6 I rented in California late last year. Nice interior—beautiful, round vents with chrome bezels, high quality knobs, soft plastics on the dash (except for the center console), and elegant, intuitive controls. It was impressive for a $18k car.

Then, there was the 2007 Hyundai Elantra I rented one weekend in January when the Alfa was out of commission. What a surprise! The interior was also very stylish and elegant. The climate control knobs have a substantial and smooth feel to them (unlike the flimsy plastic knobs on most cars in this segment), and the faux-aluminum accents looked better than most silver-painted plastics I’ve seen in other cars. The Elantra is supposed to be a compact car, but it (like the G6) is huge inside. Well-equipped too with power-everything (almost), side airbags, traction control, etc. Very impressive for a car that starts at $13k new.

Since these two cars, I’ve looked at car interiors with a discerning eye. I particularly wondered that if even Pontiac and Hyundai are making good interiors nowadays, did interiors just suddenly make strides of leaps and bounds over the last, say, 3-4 years across the whole range of cars?

Short answer after being at the Denver International Auto Show: YES.

In fact, I’d say that about 70% of all new cars today have an interior at least as stylish as my former 2000 BMW Z3—the best interior of any car I’ve had. Actually, many 2008 car interiors (even at a price point of $15k) make the Z3’s interior look pretty bland even if their material qualities are worse. (Indeed, only a handful of cars in 2000 which had less-than-boring interiors come to mind: the Audi TT, Chrysler PT Cruiser, and VW Beetle.)

And whereas Audi and Volkswagen seemed to be head and shoulders above their competition when it came to interior quality back in 2000, that doesn’t appear to be the case anymore. They are still great quality, but the other manufacturers are catching up.

Here are some sweeping generalities I’d make about new cars after being at the show:

The ugliest interiors I saw? The Honda S2000 and Honda Fit’s. I guess this is to be expected, as they both date back to 2001 and, again, automotive interior design has really come a ways since then. (The Fit was only exported to the U.S. in 2006, but was sold in Japan and Europe five years earlier than that.) That’s not to say I didn’t like the cars (indeed, I like most Hondas—especially Honda motorcycles!); I just didn’t care for their interiors.

The Toyota Yaris’ and Kia Rio’s interiors looked the cheapest, but that is also to be expected since the cars are so inexpensive.

My favorite interiors included those in the Pontiac Solstice and Mini Cooper from a style standpoint.

After last night, I think I could tell auto manufacturers what helps makes a good interior.

It probably won’t surprise anyone that my favorite car in the show was a sports car. What might be surprising is that it was the Pontiac Solstice, again! This car has been a favorite of mine since the 2005 San Francisco Auto Show. Despite seeing more of them around and acknowledging their drawbacks (top that cannot be lowered without exiting the vehicle, much less luggage space than even a Mazda Miata, worse gas mileage than a Miata), I still really like that car.

I like the Solstice as well, but I think the beltline is way too high. People inside look as though they're sitting in a bathtub. I like the lower beltlines of cars in the 60s and 70s much better, and sometimes wonder why we've gone away from that... stylistic reasons, engineering, or safety? ↩ Reply