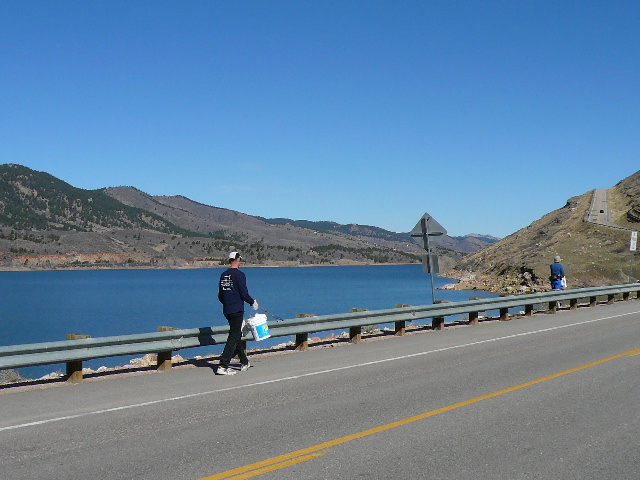 One of the most conspicuous differences between great towns in first-world countries and less developed countries is the amount of trash the litters the side of the roads.

Take Boquete, Panama, for example. This is one of the most beautiful places I’ve been to, surrounded by verdant mountains and ubiquitous colorful flowers. It was a shame to me, then, that in certain places there were so much trash (plastic bags, food containers, aluminum cans, etc.) littering the sides of the roads or banks of the rivers. Being a near-obsessive/compulsive neat freak, I felt the urge to come out with some garbage bags and pick up some trash—a feeling only pacified by the reminder that I was not going to be in Boquete that long and that our schedule was already jam-packed as it was.

In contrast, the town that I call home—Fort Collins—always appears to be much less littered. I’m not sure if we have any more street cleaners, but one thing’s for certain—we have a fairly good supply of residents and organizations who care enough about the community to volunteer their time to help make it a better place.

I was reminded of this during the weekend when I joined other members of the Fort Collins Running Club to pick up trash along the Horsetooth Half Marathon course.

Now, at first glance, I have to admit—every time I have run, biked, or driven along those roads, I never thought “gosh, there is so much trash!” But after spending a couple hours picking up trash, let me tell you that there was quite a bit. This is what we encountered:

My main “find” of the day was this pink bag by Black Diamond that originally contained climbing skins for telemark skins. It is about 6″ wide and 12″ tall. If you’d like it, let me know in the comment form below and I’ll mail it to you for FREE!

What was cool about picking up trash on this morning was that it was an gorgoues spring day and at the walking pace we were going, it was easy to enjoy the splendid views of the Horsetooth Reservoir to the west and Fort Collins down below to the east.

There were also several cyclists who passed us by (including one who was doing hill repeats of the steep, switchbacking Road 42C up Monster Hill) who were actually thanking us.

In the two hours I volunteered, I only covered about 2-3 miles, but between the dozen of us, hopefully we covered most of the Horsetooth Half course. The Horsetooth Half participants should have a nice and clean course this weekend—at least until they get to the aid stations and start droppng cups and gels everywhere. (Surprisingly, during our trash pickup, I found only one or two cups and one or two gel packets, which indicates to me that 1) the volunteers who sweep the course after the Horsetooth Half do a great job, and 2) the main litterers of the city are not the hundreds of runners who run the roads each day.)

Apparently, there will be another trail clean-up opportunity next weekend, this time for the Spring Creek Trail and Cottonwood Park. I’m not sure if I can make it to that one, but for those who are interested in volunteering, details are below. Thanks!

WHO: Anyone & everyone that uses the trail & open spaces near Taft Hill & Drake roads to Cottonwood Park at the west end of Overland Dr. A small group of CSU students will also be assisting.

WHAT: Trail & open space clean up. Dress accordingly. We may need to enter some wet or muddy areas. Bring gloves.

WHERE: Please meet at 2724 Willow Fern Way to get started.

WHY: To better our trails & open spaces.

FOOD & DRINK:
Some light snacks will be provided.