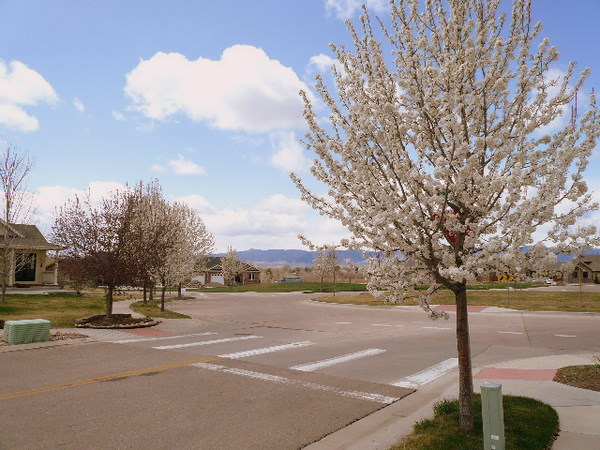 I’ve lived in Fort Collins now for 2.5 years so this will be my third spring here. This also means that I’ve survived a third winter in Northern CO, and am happy to declare that they are on the whole quite nice—if a little unpredictable.

To summarize the last three winters:

There have been some consistency during all the winters, such as (1) it simply does not rain from mid-October through March out here, and (2) I never have to do any yard work (e.g., lawn mowing) during those six or seven months since nothing grows.

Anyhow—at last—it seems like spring has arrived, with the trees blossoming nicely, if a couple weeks later than usual. The downside to all this is it is also weed-pulling and lawn-mowing season! I just mowed the lawn and fired up the sprinklers for the first time on May 3.

But with the grasses greening, flowers blooming, and trees leavening, it is a very pretty time of year. Here is one more pic from my neighborhood where you can see Richards Lake and Horsetooth Rock, although barely because my photographic skills (and camera) are pretty bad.