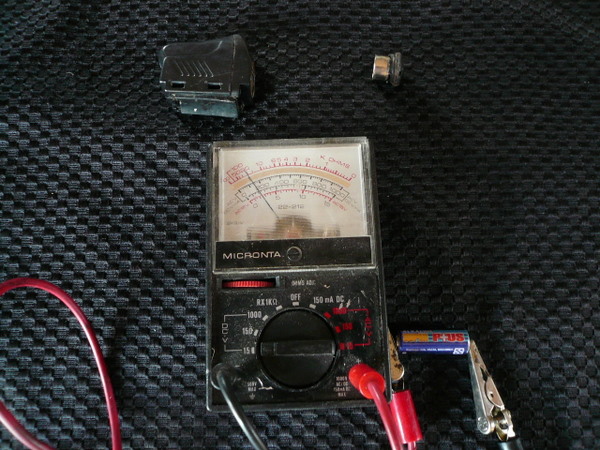 “Hi, this is Felix Wong calling on the 4th of July. Its Friday, 10:20. I’m couple of miles from the New Mexico border. Every holiday it seems like I have some sort of vehicular problem and this is no exception. I had my second crisis. Last night my cyclometer died. I think it has something to do with the sensor. I’m not sure if it is the sensor itself or the sensor battery. It doesn’t really matter because the sensor battery is a very rare 12-volt double-A-size battery. One that I’m not going to be able to find anywhere. Right now I’m heading off to Chama. I’m going to look for a cyclometer…”

One month after that call-in from Day 22 of the Tour Divide, I finally inspected the aforementioned cyclometer sensor. I now know for certain why the cyclometer no longer was working after the first 2,000 miles of the mountain bike race.

I hooked up my (yes, analog and Flintstonian) multimeter to the 12-volt battery, and it registered just two volts. So the battery was (is) effectively dead. At least, presumably, the sensor itself still works.

The battery is an A23 type—one that was certainly not available in convenience stores. However, it was not as rare as I had thought. In fact, when I showed it to my friend Tori, she said, “I have one of those!” And sure enough, she did have one stored on a shelf of her refrigerator. Turns out she had to buy a replacement battery for her Genie garage door opener, and it was that size. She had an extra one of these because the battery came in a two-pack.

Anyhow—hooray, so at least I can use the wireless cyclometer again. I will probably move the wired Cateye cyclometer that I had obtained from a generous cycling enthusiast named Joshua in Chama, NM (which required going 28 miles off course) to my commuter bike. Or, I’ll try to locate Joshua in Chama and mail it back to him along with a thank you note.

If anyone knows Joshua (purportedly one of the “biggest cycling enthusiasts in all of Chama” who does construction work), please sign the comment form below and let me know how I could get ahold of him. Thanks!

ah, come on Felix -- I was expecting you to wire six AAA batteries in series....in my primitive mechanical engineering way I think that would work... ↩ Reply