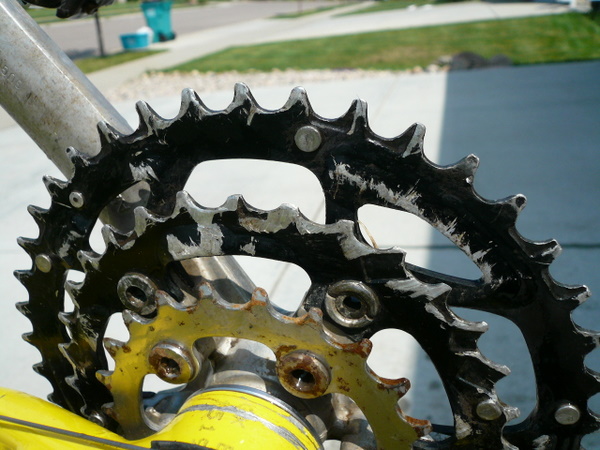 I mentioned in a post a couple weeks ago that seemingly every piece of equipment I used took a beating during the 2,700-mile Tour Divide mountain bike race. This is true particularly for the components on my mountain bike. Here is one example.

So I finally got around to washing my already mostly disassembled bicycle, including a rather thick layer of mud on the crankset. I was pretty astonished to see the condition of the chainrings—particularly the middle one. Click on the photo above and compare its condition to the much-less-used large chainring or the (very-often-used, but steel) granny gear.

Such as the pedals. The bearings are so shot that the pedals turn with more resistance than an Atkins follower displays when offered a donut. It makes me wonder how much they were slowing me down during the race. I think I can salvage the pedals by disassembling and repacking them with fresh ball bearings and grease, but we shall see.