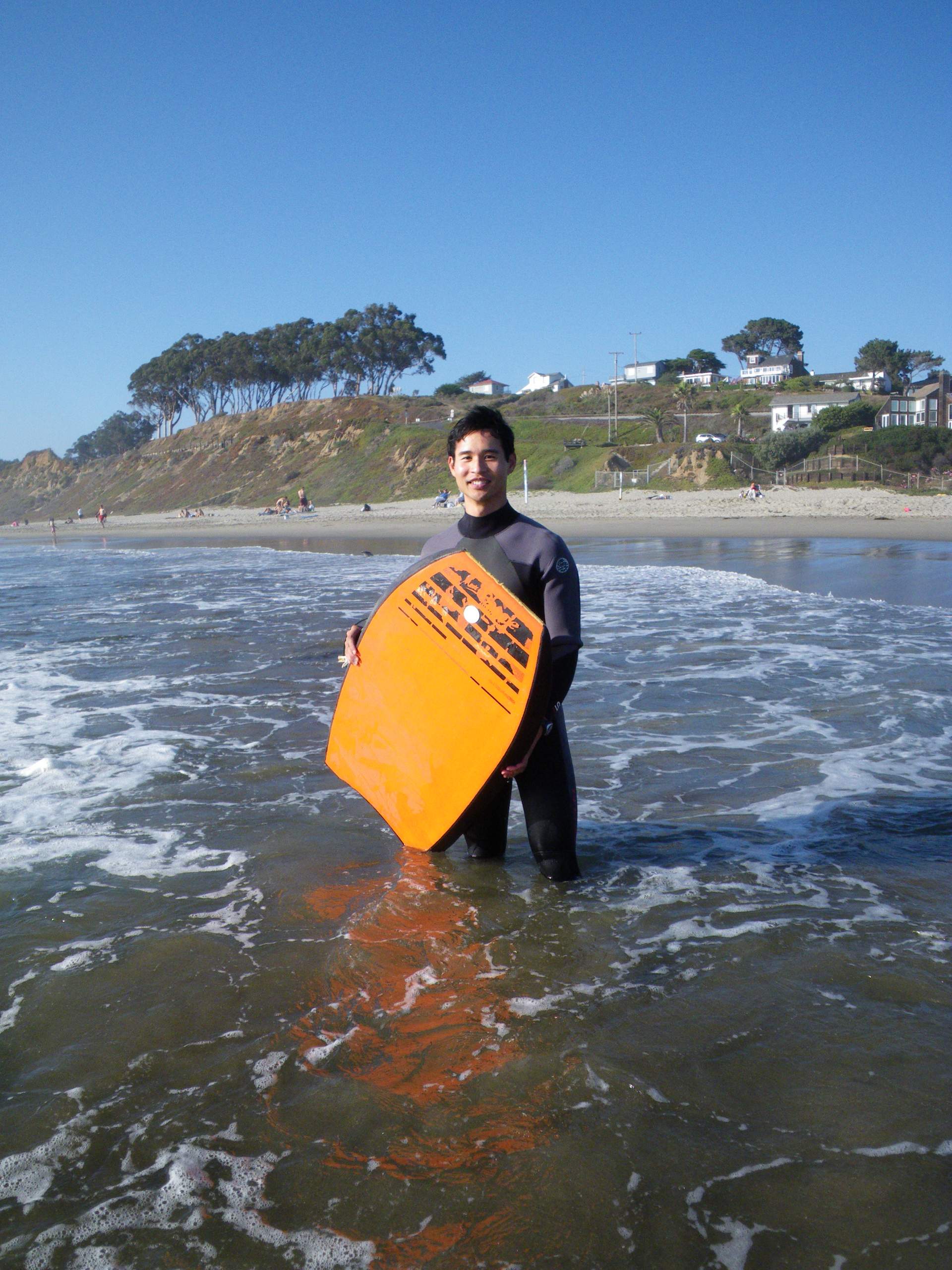 It sounded like a good idea at the time. Make that a great one.

“We could go also go to Santa Cruz to do some surfing,” said my friend Adrian after I told him I was hoping to visit over the weekend. Never mind that it turned out Evelyn (Adrian’s wife) was not very keen on the idea (her precise words: “I’m NOT going!”), and Adrian had only surfed one time before, which was exactly one more time than I.

“Great,” I finally remarked after some discussion of whether we should take lessons or not (being the intrepid dudes we are, we decided on the latter). “I’ll come over tomorrow, preferably after I look up Wikipedia on ‘how to surf.'”

As it turned out, we didn’t end up going to Santa Cruz due to “crappy waves” as reported to us by surfboard rental shops. I also never did get a chance to look up Wikipedia.

We did, however, go down to Watsonville (south of Santa Cruz) where the waves were reportedly better. There, we rented a single surfboard to complement the boogey board that Adrian brought. Why just one surfboard? Well, it was cheaper, plus there was only enough room in my Kia Optima rental car for one!

Then we jumped in the ocean wearing wetsuits, with Adrian using the surfboard (since compared to me, he was a pro, having that one lesson and all) and me using the boogey board.

Right off the bat, Adrian tried to give me a few pointers. For example, “If you encounter a monster wave, just dive under, otherwise you will get hammered.” It turns out that was good advice. I know because right after he told me that, a big wave came, and instead of diving under like he suggested, I tried to jump over it—and got hammered.

Then he tried to show me how to paddle. He demonstrated this as I tried flailing my arms like a monkey and kicking harder than Bruce Lee. Funny how despite the large expense of energy, I was making no forward progress while Adrian cruised out to sea on the surfboard. I can attest that using the boogey board like a kickboard is bad technique.

Eventually, though, I managed to catch some waves. A dozen, in fact.

It seemed like the trick was to time the oncoming waves just right, and right when the wave was about to hit, either push off with the legs (if the water was shallow enough) or paddle like crazy in the direction of the wave. A few times, the wave would carry me along for a good minute or so, all the way back to shore.

Meanwhile, Adrian was trying to catch some waves with the surfboard and stand up. A few times he was nearly successful in standing up, but each time ended with a big crash followed by me wondering where Adrian went.

That was actually a lot more successful than I on the surfboard when we switched off. I had limited success getting my tummy on the board, much less my feet, and standing on it was absolutely out of the realm of possibility.

Hmmm, maybe lessons would have been a good idea after all.

At the end of it all, as the sun set over the Pacific, we agreed that it was really fortunate that Adrian had brought the boogey board, otherwise the evening would have been “a total disaster.”

A fun one, nonetheless.