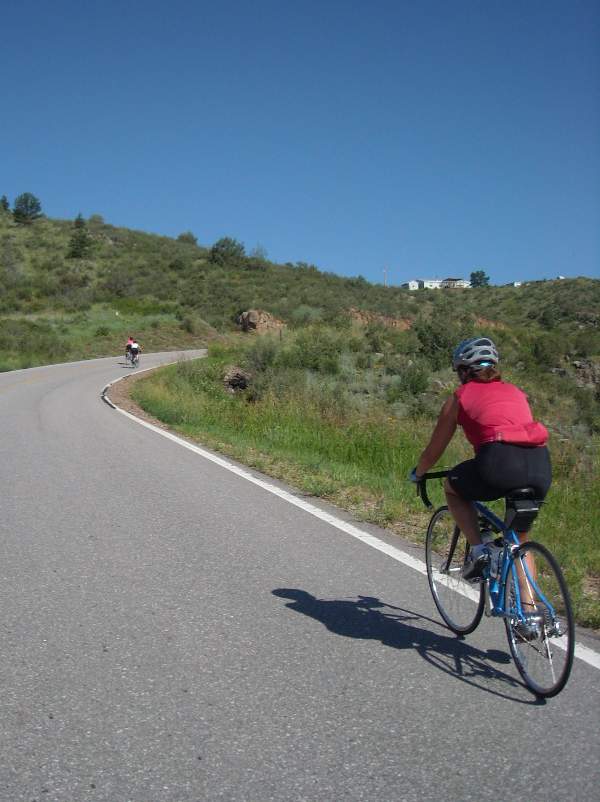 It’s been a good year but one thing that causes me a bit of remorse has been the trifling amount of cycling I’ve done in 2009. By this day on last year’s calendar I had already done three weeks of pedaling (on average) over 100 miles a day in the Tour Divide, whereas so far this year there’s been only two occasions where I could claim that I had ridden 100 miles per week. Including this one.

It started when Raquel and I joined some of her Courage Classic teammates on a ride through Rist Canyon. This was similar to the ride I did over a month ago except (1) we rode through the canyon clockwise, (2) it was not raining, and (3) I had great company. Canny did too as Raquel was riding a gorgeous ’08 Cannondale Synapse from the same family of storied American-made aluminum bicycles, albeit Canny’s junior by 16 years.

Unfortunately, the Synapse came with plastic rim tape which kept sliding around and exposing sharp-edged spoke holes on the rear wheel. As a result, the rear tire kept going flat due to tubes being punctured by its own rim! I knew exactly what was going on by the second flat and kept trying to move the rim tape back on the holes before replacing the tube, but as the tape was not backed with adhesive it continued to recede and the tire would get a flat every 10 miles or so.

No problem, though—we had just enough spare tubes and the flats forced us to take a break, relax and enjoy the day. The weather and the verdant scenery could hardly be any more perfect.

The next few days I had a visitor named Paul whom I met through the CouchSurfing.org. CouchSurfing.org is a resource for world travelers like Paul and myself looking for not only a place to stay but also to meet other travel enthusiasts to share experiences with. Paul saw that I was also a cycling enthusiast and as Fort Collins was going to be his first stop in a nine-month around-the-world journey, he asked if he could crash at my place and do some road riding together as well.

I was happy to oblige. Paul was from the flatlands of Chicago but still was interested in some hills, so the first day I took him on a classic ride including Centennial Rd. by the Horsetooth Reservoir. Not only are the views there the most outstanding in all of Fort Collins, there are plenty of short-but-steep (~12-15% grade) climbs to force one to downshift to his lowest gear while quickening his pulse more effectively than Charlize Theron wearing a two-piece. You can read what Paul had to say about the ride here.

So it’s been a good week of cycling in northern Colorado, with cheerful riding partners, pleasant weather and an abundance of camera-wielding opportunities. Now if I can just find the time to do more rides like these. Two 100-mile weeks within a calendar year is simply not enough.